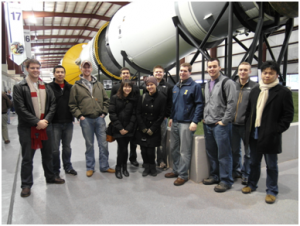 Before getting our boots dirty on construction projects scattered throughout Houston and College Station, Texas, we decided to head over to NASA’s Johnson Space Center.  Upon arriving, we rocketed off on NASA’s Tram Tour which took us around the entire Johnson Space Center campus allowing us to view a variety of astronaut training facilities, both historic and operational mission control, and Rocket Park.  At Rocket Park, we had the chance to stand aside the enormous Saturn V rocket and to see various operating components which were scattered about the hanger as exhibits.  Back at the visitor center we experienced “the feel of space” through a series of interesting exhibits and demonstrations.  These included a life-size model of the the living quarters on the International Space Station, a demonstration of what life is like in space, and a simulated landing of the Space Shuttle.  We were also able to watch several short films on the history and future of NASA as well as browse an exhibit of historic NASA artifacts including an actual moon rock brought back from the Apollo 11 mission.