The morning started off at the McCarthy Building Companies’ office in St. Louis where we ate breakfast and got to interact with employees in management, MEP pre-construction, and the bid preparation team.  McCarthy is a 150 year old company that generated a bit over $3 billion in revenue in 2013 working on projects in healthcare, higher education, labs, and federal jobs.  When the recession hit, McCarthy was able to weather the storm by taking on very large jobs for the federal government.  These jobs enabled McCarthy to become an expert in a field that they were not entirely familiar with while stabilizing their work force.  They love to work on challenging projects and their success record proves that they can complete these jobs on time and under budget.  With McCarthy’s expertise in the trades, they are able to self-perform concrete, piping, and carpentry which helps them retain margin. 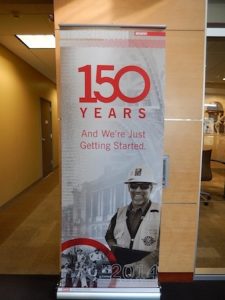 Jaime Perera, Vice President, talked to us about his group that estimates the mechanical, electrical, and plumbing packages on McCarthy’s projects.  Their contract types range from design-bid-build, design-build, and design-assist.  At U of I, we get experience using the RS Means manual to estimate material and labor costs for construction projects, but we found out that McCarthy uses the more precise MCAA published production units.  This trade-specific estimating tool allows for greater freedom to adjust for the assumptions made in the methods of construction. 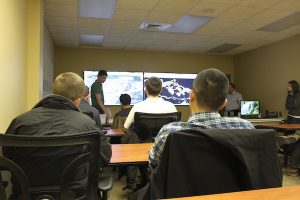 The other part of our visit included learning about the Department of Veteran Affairs- Jefferson Barracks energy plant and utility infrastructure project.  This $56 million project includes the rerouting of existing utilities, removal of the existing sewers at building locations, and the installation of sanitary and storm systems, among many other improvements.  The project is very MEP focused, especially with the steam and chilled water loop which will cover nearly a mile around the campus.  We met with McCarthy’s team that worked on the bidding preparation of both phases of the project.  The first phase of the project was won by McCarthy and they showed us how they utilized building information modeling to strategically phase the project.  It was interesting to see how much hard work and man hours the company put into the pursuit of projects.  It goes to show how dedicated McCarthy is to ensuring the client that they have the capabilities to deliver a project while using their expertise to come up with innovative construction methods. 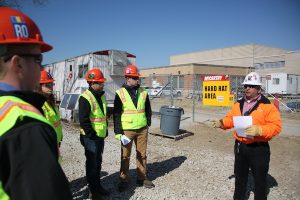 Finally, we walked the jobsite with Doug Mangers, Vice President of Operations and Cal Barton, Project Superintendent.  They gave us a first-hand run-through of the challenges that are being faced on the project.  Because the campus is remaining operational throughout the project, McCarthy must provide temporary power while work is being done on the energy plant and site safety for the many patients/pedestrians that walk near the jobsite.  Additional project concerns included running into utilities that were not on the original surveys and dealing with the asbestos abatement at building tie-ins.  It was great to hear from Cal and Doug who both have many years of experience with this type of construction.  Seeing Cal’s transition from working his way through the trades to becoming a superintendent/manager especially reinforced the belief that having experience in the field is very valuable in construction management.