In the afternoon, we traveled south to Dongtan to visit the KTX station in the city. KTX stands for “Korea Train Express”, a High-Speed Rail service which began operating in 2004. KTX provides service from Seoul to Busan, the largest port and second largest city in Korea. It also operates several Higher-Speed Rail lines through out Korea. The purpose for this new station is to provide proper transportation options for residents in Dongtan, one of the largest growing satellite cities outside of Seoul; at the same time, it will also relieve congestion in the Seoul Station. The Dongtan line is a branch of the current Korean High-Speed Rail network from Seoul to Busan, it will merge with the current network outside of Seoul and operate service from Dongtan to Busan. The Dongtan branch will be 61km long and the project was divided into five sections for construction purpose. Station’s civil work is being constructed by Samsung Construction&Trading Corporation, one of the largest and most experienced contractors in South Korea. Samsung C&T constructed Tower 2 of the Petronas Towers in Malaysia, the Taipei 101, and the Burj Khalifa, the tallest building in the world.

For this project, Samsung C&T is responsible for constructing almost 2000 meters of tunnel and complete civil work for Dongtan Station. The project started on July 25th, 2012 and it is scheduled to complete by December 29th, 2015. The total project cost is approximately $268.8 million US dollars. There will be three layers when the project is completed, the bottom layer will have six railway tracks, four tracks for KTX and two for GTX, a suburban railway system connecting Dongtan to Seoul. The middle layer will create pedestrian passage space, and the highest layer will be an expressway currently located next to the project site.

Samsung C&T used open cut construction method to complete the station, and we were able to see the magnitude of the pit from the viewing deck above. The tunnels were constructed by NATM method, which involves the use of explosives to blast the tunnel. There are currently 200 labors on site, and most of whom are Southeastern Asian workers who are in Korea on a temporary visa. To maintain high standard safety performance on the project site, Samsung hires professionals who speak in labor’s native languages to establish proper safety education and training. The project operates 24 hours a day, 7 days a week to meet the completion date, and each day, only two to three meters of tunnel can be excavated. 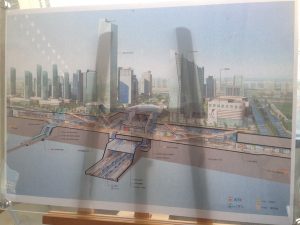 Once the project is completed in 2015, KTX is hoping to begin High-Speed Rail operation by late 2016 or 2017; meanwhile, the construction for two high-rise towers and a shopping mall will begin and is scheduled to be completed in 2019.

Overall, this visit helped us to understand KTX’s future development plans around the Seoul metropolitan region and Korean government’s ambition to quickly expand, connect, and transform Seoul into a mega metropolitan area. We were also able to learn different construction approaches Samsung is using in tunnel construction compared to our previous visits in Brazil. This visit was a great way to start our field visits of the South Korea trip. 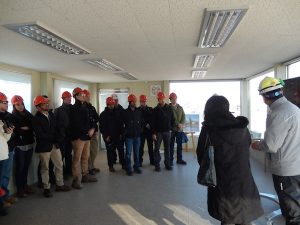