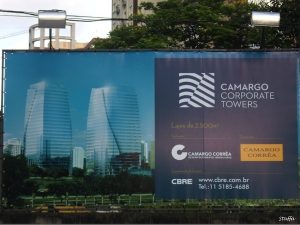 Our second tour of the day was Projeto Terreno Camargo Corrêa, the construction of two high-rise towers for Camargo Corrêa. One of the largest privately-held organizations in Brazil, Camargo Corrêa Group operates in construction, engineering, cement, energy concessions, transport concessions, real estate development, shipbuilding and offshore, and apparel and footwear. The client of the project is Camargo Corrêa Desenvolvimento Imobiliario (CCDI), and the contractor is Camargo Corrêa. The architect on the project is renown Pelli Clarke Pelli Architects. The project is comprised of four buildings: the twin 33-story towers, a five story conference center, and a utility building. The project began with two phases of demolition starting in June 2011, with a projected completion in January 2015.

Our tour began with a video and powerpoint presentation by the construction management team highlighting the key features of the project. Hailed as a “milestone of building construction in Brazil,” this project seeks to pursue LEED  Platinum certification under the LEED 3.0 rating system. If successful, this will be the first LEED Platinum project under LEED v. 3.0 in Brazil. As a consequence of the project’s targeted LEED status, the construction team is responsible for ensuring that construction waste is sorted, with a targeted 95% landfill diversion; that construction does not disrupt the surrounding environment, and materials fulfill the specifications to achieve sustainable materials, indoor air quality, and regional priority credits. Unlike most LEED projects in the US, we were informed that there were no municipal or tax incentives for building LEED, but that there were other environmental standards that the project had to abide by.

The contract for the two office towers is just for the construction of the building core and shell, with buildouts of the new Camargo Corrêa headquarters and other tenant offices to be performed afterwards under separate contracts. While the core is concrete, the floor stabs are concrete on corrugated steel deck, and the shell is comprised of a steel columns encased in concrete. Unlike the US, steel structure is very rare in Brazil. The combination of concrete and steel structure was largely a consequence of the unique design of the building, which has a curved taper towards the top. Each floor has approximately 2,500 square meters of space. The measurement deck to deck is 4.28 meters, with finished ceiling heights of 2.9 meters on each floor. Another key feature of the project, although quite common for high-rises in Sao Paulo, is the helipad atop Tower A. When completed, this helipad will be able to accommodate a larger helicopter class than typical for high-rise helipads, shuttling executives to and from the office while avoiding the heavy traffic of Sao Paulo.

In our tour of the site, we ascended to one of the upper completed floors of Tower B. Currently, the core of both towers has been completed to the 29th floor with the use of self-climbing formwork. Construction of these floors had proceeded at approximately 3-4 floors per month. The final three floors of each tower will have to be completed using conventional formwork. We were informed that the project has been proceeding relatively smoothly and is just a hair behind schedule. Unfortunately, photos were not permitted onsite, but renders of the completed project are available.