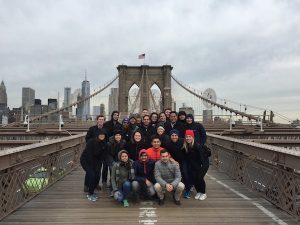 On Tuesday, March 20th the Global Leaders took advantage of a free morning to walk to the Brooklyn bridge and learn about its history. Our interim professor, EJ Ignacio, shared his knowledge of the bridge throughout the tour. The picture below shows the approach of the of the bridge from our hotel. 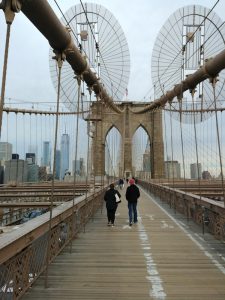 The bridge construction started in 1869 under the guidance and design of John Augustus Roebling. That same year John died due to a construction related incident, and his son, Washington Roebling took over construction.

The bridge’s two towers were constructed on two large caissons. The caissons were made by sinking two upside-down boxes of southern yellow pine. Once the boxes were sunk, compressed air was put into the boxes and workers went into them to remove soil until the caissons hit bedrock. Once the boxes hit bedrock, they were filled with concrete. It was unknown at the time that this method of building caissons put the workers at risk for getting the bends. Washington Roebling ended up getting the bends and needed to be assisted by his wife, Emily Warren Roebling, who was the first woman in the United States to oversee a construction project. 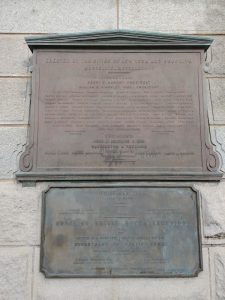 The completed bridge is a hybrid of a cable-stayed and suspension bridge. This means the bridge has bother horizontal and diagonal cables to help support the bridge’s load. The intersecting cables can be seen in the picture below. 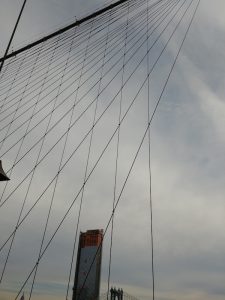 The bridge was renovated in the early 1900’s support 3 lanes of automotive transportation on both sides. Diagonal reinforcing and horizontal trusses were added to support the new loads. Overall, the trip was informative, and the views of New York were worthwhile. It is important for the Global Leaders to learn about old construction projects amongst many new projects we visit. 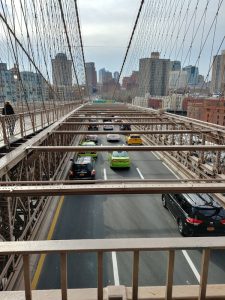