Following a delicious BBQ lunch at Martin’s and a sinuous drive through the ritzy hills around Nashville, we arrived at the Nissan North America to meet with Turner&Townsend. Nissan’s North American headquarters stood out as soon as we approached it.  The corporate office is certified as LEED silver and the shining glass exterior sets it apart from both the adjacent stucco office park and rolling green hillsides. 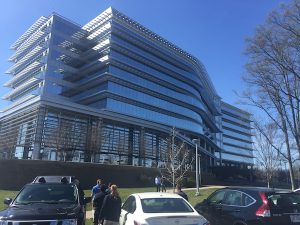 There were fewer Nissans and Infinities in the parking lot than I expected but there was a whole charging station for the company’s Leaf model.  As we waited in the lobby, I quickly learned that Nissan is the official sponsor of the NCAA tournament.  Watching a looping display of employees catching and passing a basketball on 4 overhead projectors, I concluded that Nissan employees may not know how to ball but know how to have some fun. 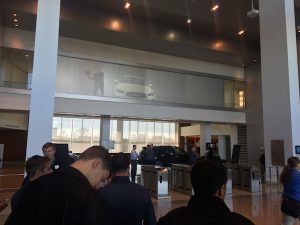 We were then greeted in the lobby by Chris and soon after made our way up to a seventh floor conference room for our company visit.  Turner&Townsend does not have its own office in Nashville but rather works within Nissan’s building—after all, all the work they do locally is for them.  What followed was a nearly 3-hour info session but was greatly insightful into the kind of work Turner & Townsend performs. 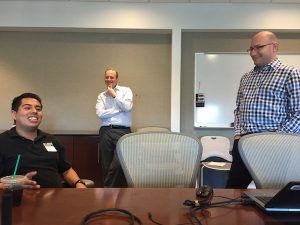 Unique to our site visits so far, everyone, including the 12 of us, introduced ourselves.  Chris is an Associate Director of 8 years with a marvelous British accent.  Joining him was the American Michael, who also has 8 years of Turner & Townsend experience.  If you are still thinking that Turner & Townsend is anyway related to Turner Construction, you’re wrong but in the majority.  Chris and Michael joked about this common confusion during the start of the meeting.  Instead, Turner & Townsend is a multinational consulting firm founded in the United Kingdom with expertise in consultancy, delivery, and operations.  T&T is not a builder, designer, or developer, but works with many well-known clients to deliver professional services such as program, project, and cost management.  When it comes to managing a project, T&T is truly independent and can offer unbiased advice to clients.  T&T has been expanding across the globe during the past few years.  It is now a partnership with 90 offices worldwide in 130 countries.  Chris explained that the life of a consultant can be exciting with T&T offering sponsorship across the world or having the opportunity to settle down with a big account such as Nissan.  Michael explained the work they have done so far for Nissan since beginning their relationship in 2001: the Nissan Retail and Environmental Design Initiative.  Nissan, like any other OEM, looks to refresh their brand every 10 years or so, and T&T has been hired to handle the development of dealerships across the world to meet the new standards.  While admitting he was not an architect by any means, Chris gave us the basics of what this could look like for a new dealership. 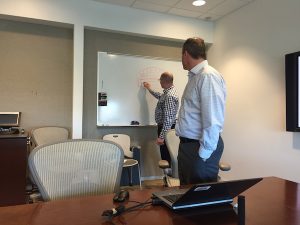 Redoing dealerships can be a major cost for their individual owners—ranging from about $3 million redo to $5 million new—but are essential in receiving corporate brand approval and the incentives that come with.  Although there are standards set for the development of all Nissan and Infinity dealerships worldwide, Turner & Townsend still allows for some local variation.  This accounts for local building style and owner preference but can yield some crazy results.  In the United States, dealerships might have the occasional putting green inside, but in China they might have whole hotels attached or VIP lounges with movie rooms and salons for nails and massages.   Whatever it is, T&T acts as the conduit between dealer and Nissan for the construction.  With any consulting company, quality and reputation are drivers for new business.  Just with Nissan, T&T has grown their operation from a team of 4 to 20 and amassed new business development projects along the way.  As an incoming intern to Turner & Townsend in New York City this summer, it was exciting to finally meet some people from my new company and get a look at the awesome work they do.  We concluded with a group photo and thanking Chris and Michael for all their time, preparation, and courtesy for welcoming GLCM to their Nashville operation and teaching us more about the construction for the intricate auto industry. 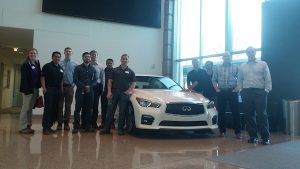