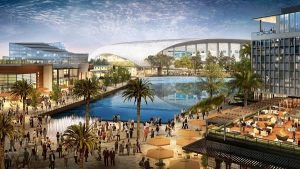 After grabbing lunch on USC’s beautiful campus, the GLCM crew headed to south to visit the soon-to-be Inglewood Stadium. This 3 billion dollar project will be the home to the Los Angeles Chargers as well as the returning Los Angeles Rams. We were hosted by both Kiewit and AECOM Hunt. The project is a joint venture between AECOM Hunt and Turner. Kiewit is a subcontractor on the job and their contract is about $500 million to handle all of the excavation as well as footings and other structural componenents of the job including structural columns and an MSE (mechanically stabilized earth) wall.

Kiewit Infrastructure. We were given presentations by each of the two about both the project overall and Kiewit’s specific role in the project. 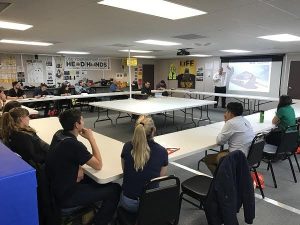 This project is one of the largest that GLCM has visited this year in terms of land size, which stretched over about 300 acres. Bob talked to us about the interesting components of the stadium. He explained the project as digging a large hole into the ground, then placing a bowl into the hole, then covering the bowl. The roof of the stadium will be the largest roof over any NFL stadium, spanning over 1.1 million square feet and weighing over 20,000 tons. The roof itself will take 18 months to complete. There are 38 8 foot diameter structural columns around the footprint of the stadium that help keep it stabilized. These columns are connected to butterfly caps which have 4 5 foot diameter columns attached to them which finally die into massive footings. The footings are 40 ft by 40 ft by 8 ft and they will be over 100 feet under the bottom of the bowl. With such a large stadium comes extremely large reinforcement. During the presentation, a piece of the largest size of reinforcement used in the job, 14, was passed around examine. 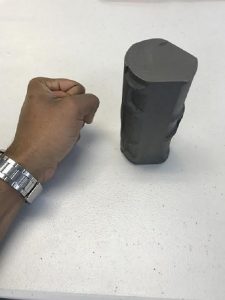 This type of reinforcement was used in the butterfly caps that were on top of the columns that came from the footings. Additionally, because this project is going to be so big, it will have a lot of laborers on site. At its peak, the project will have around 2500 people on site at once. The project is expected to run 6 days a week with 2 10 hour shifts on each day.When Mike was presenting, he explained that Kiewit had just finished all of the excavation, 8.6 million cubic yards, last Friday. They were now preparing formwork and such for the gigantic MSE wall that would surround the stadium on the edges of the large “hole” that was just dug. 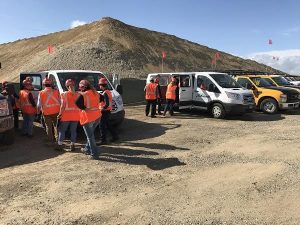 While riding around the site, our guides explained to us the different parts of the project that we were passing and important aspects that pertained to everything we saw. We got off at different parts of the site to examine the staging area for a lot of the material that Kiewit was preparing to put in place including the 40 ft by 40 ft footings and the MSE wall. We were also able to take an awesome picture right above the “bowl”. 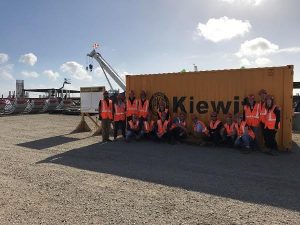 After the site visit, we headed back to the Kiewit office on site and said our goodbyes to our hosts. We would like to take the time to thank both Bob and Mike for taking the time to show us this amazing project. We truly learned an immense amount about both this project specifically as well as AECOM Hunt and Kiewit as companies. Hopefully we can all come back when the stadium is completed and watch the Rams or Chargers lose to the Bears.