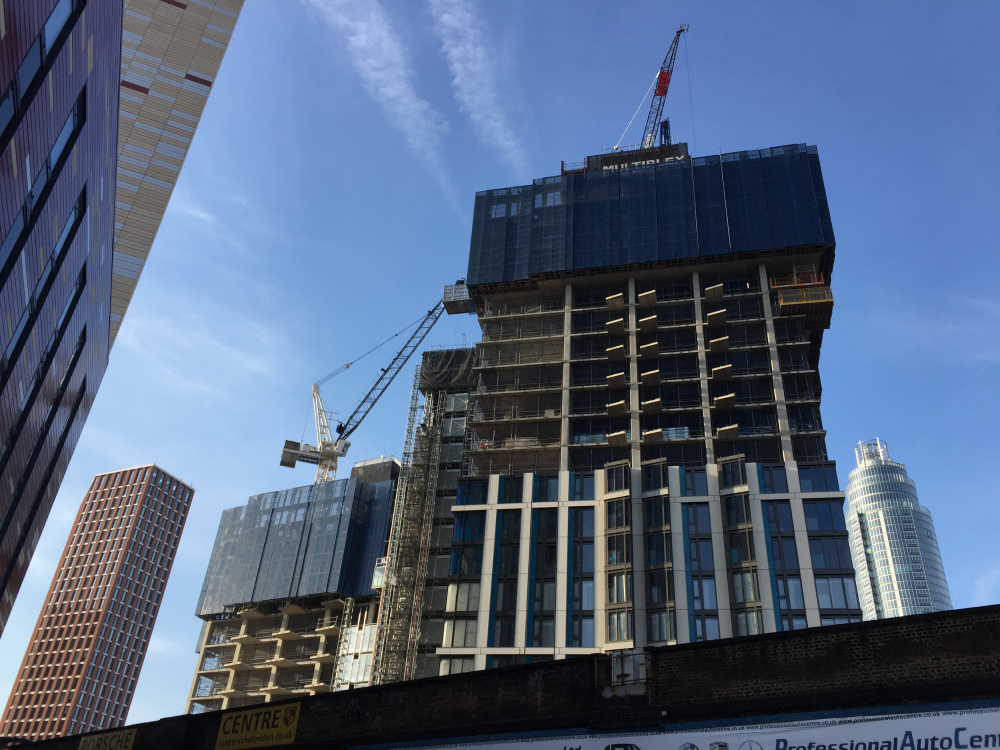 The London trip is off to a strong start with one amazing site visit down and plenty more to come! This morning we had the good fortune to visit Multiplex at the DAMAC Towers in Vauxhall. With a unique two-tower design and linking bridge midway up the high rise, the design-build contract for this project is approximately £260 Million ($328.5 Million). The project site is logically split up into two sequences: the north tower and the south tower. When the entire project is complete, the north tower will be 51 stories and the south building will be 24 stories with a shared parking basement (B1) and a building services equipment basement (B2). Currently the core of the north building is poured up to the 23rd floor while the south tower is at the 13th floor. The north tower will be primarily luxury housing with units by Versace Homes starting at £1 Million and the south tower will be designated for more affordable housing units. 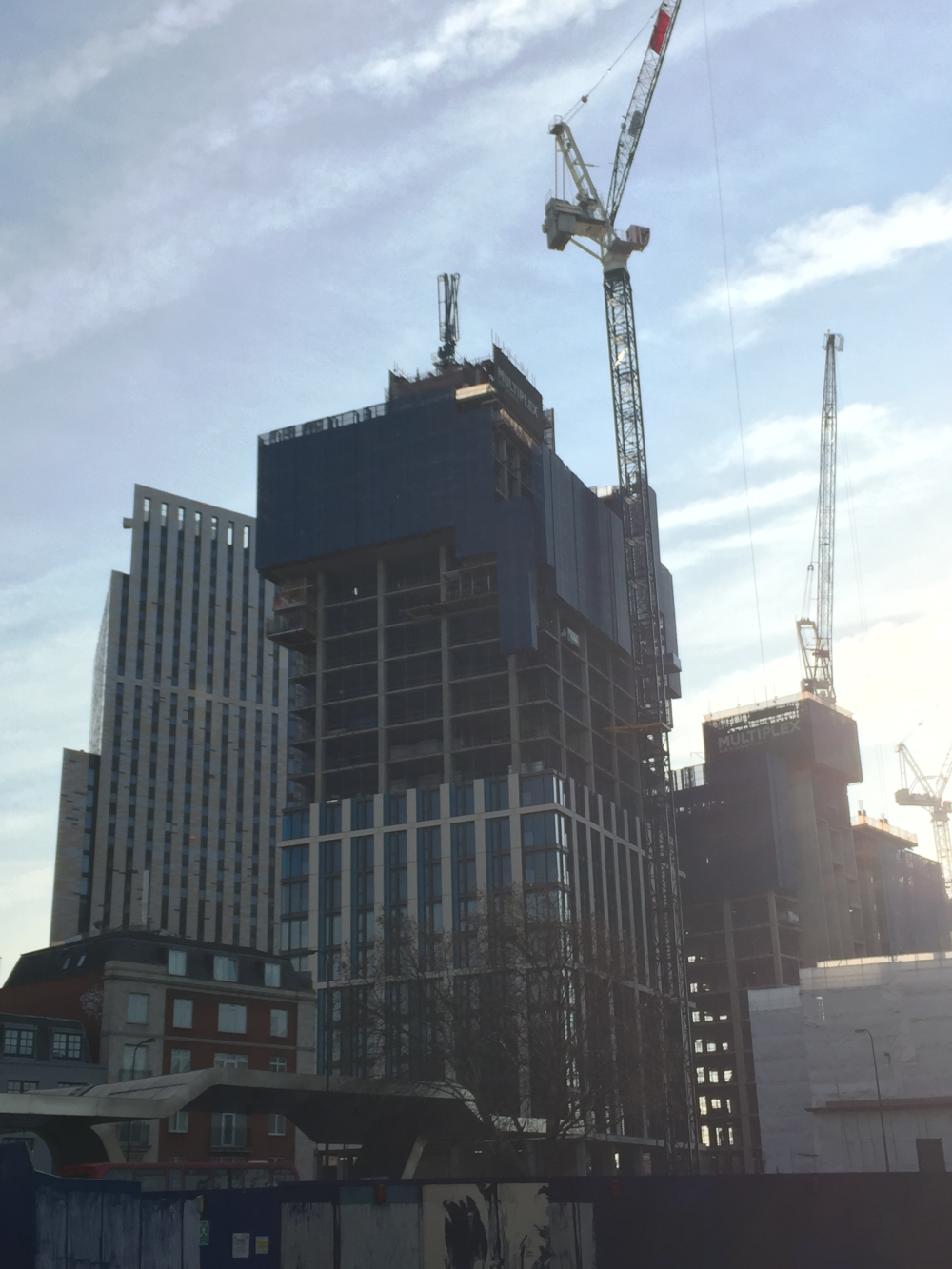 While they have not yet reached the height of the bridge, the link bridge will connect the towers on levels 18 through 23. Since the slabs on each floor of the north tower do not match those of the south tower, they have designed the bridge such that the connection to the south tower will be built-up to create a level bridge. The north tower architecture is unique with two different floor designs. The concrete core above the bridge was designed differently from that below to accommodate the bridge design and improve constructability of the bridge. The concrete contractor is currently in the process of adjusting the jump core for the remaining 28 floors. Additionally, the shear walls for the remainder of the building will be less intensive than those for the lower half of the tower. 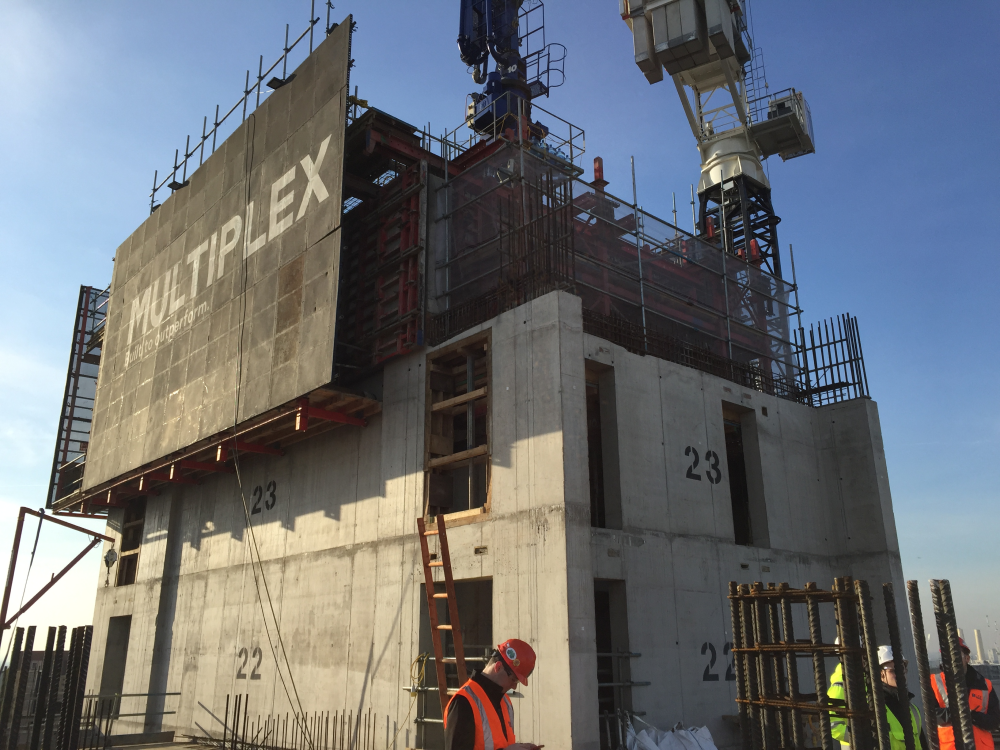 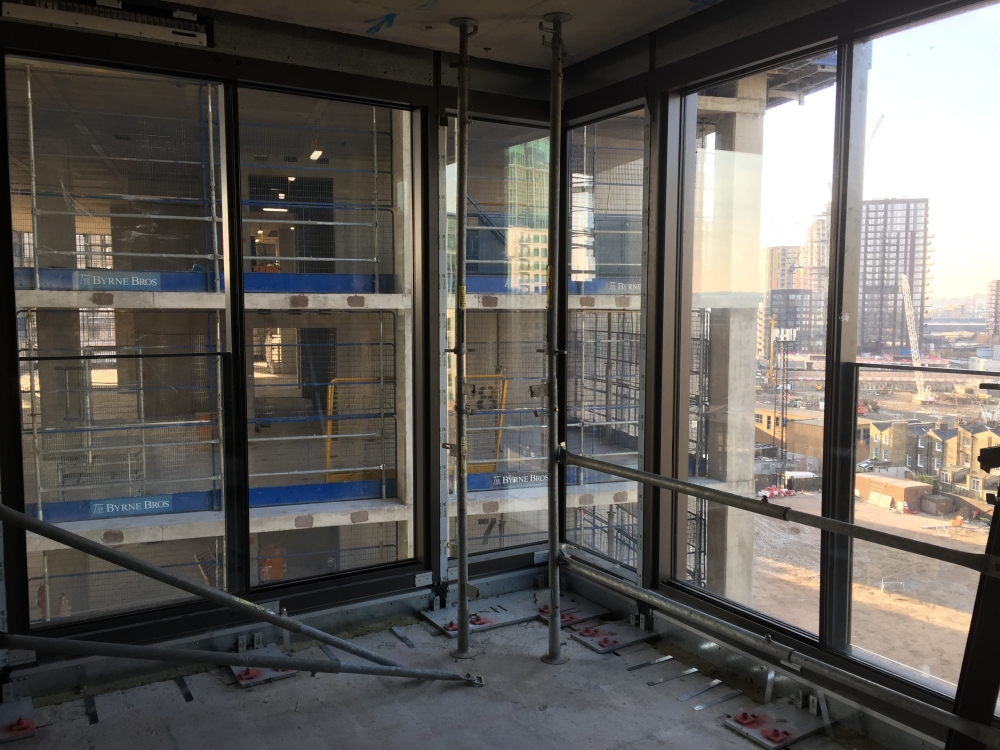 The tower crane on the north building is used to lift large materials to the individual floors. The window panels are lifted to the necessary floors for storage. To install the panels, a spider crane is established on the level above. The spider crane then holds the panels over the edge while glazers tie the panels into the superstructure. The spider crane used to install the panels easily fits into the skip hoist which makes it easy to move with the window installation sequence. The north tower will have approximately 20 window units per floor and 1500 units for the whole building. Multiplex estimated that they will be able to install 1 floor of window panels per week. 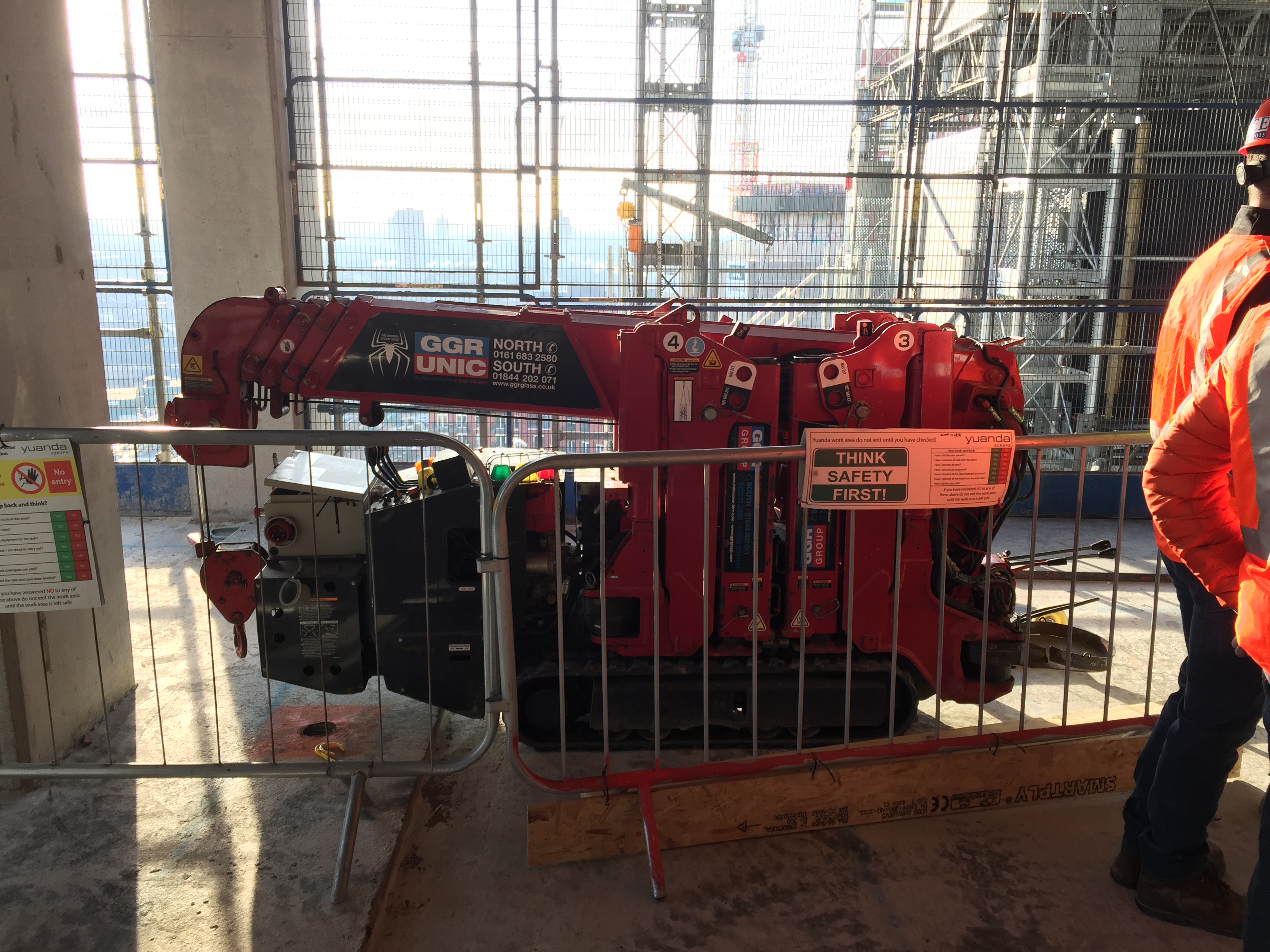 To maximize the safety of workers on site and ensure that no issues arise with the adjacent railway, full-height guard rails are being installed up the entire exterior of the building. Installation of the fall protection system was included in the concrete contract and is erected by the concrete subcontractor as new floor slabs are poured and finished. One concern that must be considered with every decision on this project is the proximity of the site to the railway. This is a major point of concern because the damages associated with an incident involving the railway are catastrophic. For example, during construction of the high rise on the opposite side of the railroad a piece of cardboard fell onto the railroad from the building causing a shutdown of the tube. This caused a shutdown of the rail line and the project for two weeks. Additionally, the cost of causing a shutdown of the railroad is £1 Million per day. For these reasons, the Multiplex team on this project take the upmost care when planning all phases of the project. 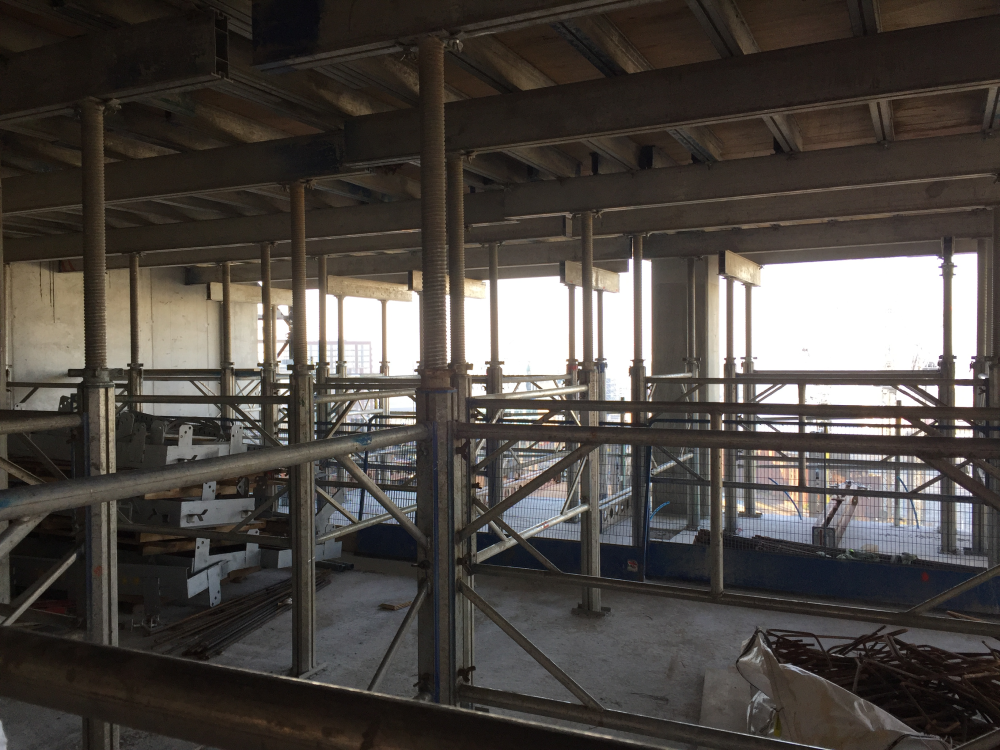 Both the north tower and the south tower will have a crane for a large portion of the project. The north crane is already erected and will be climbing higher in June of 2019 while the south tower is in the process of erecting. Additionally, the north building has three skip hoists to move materials and personnel to the higher levels. 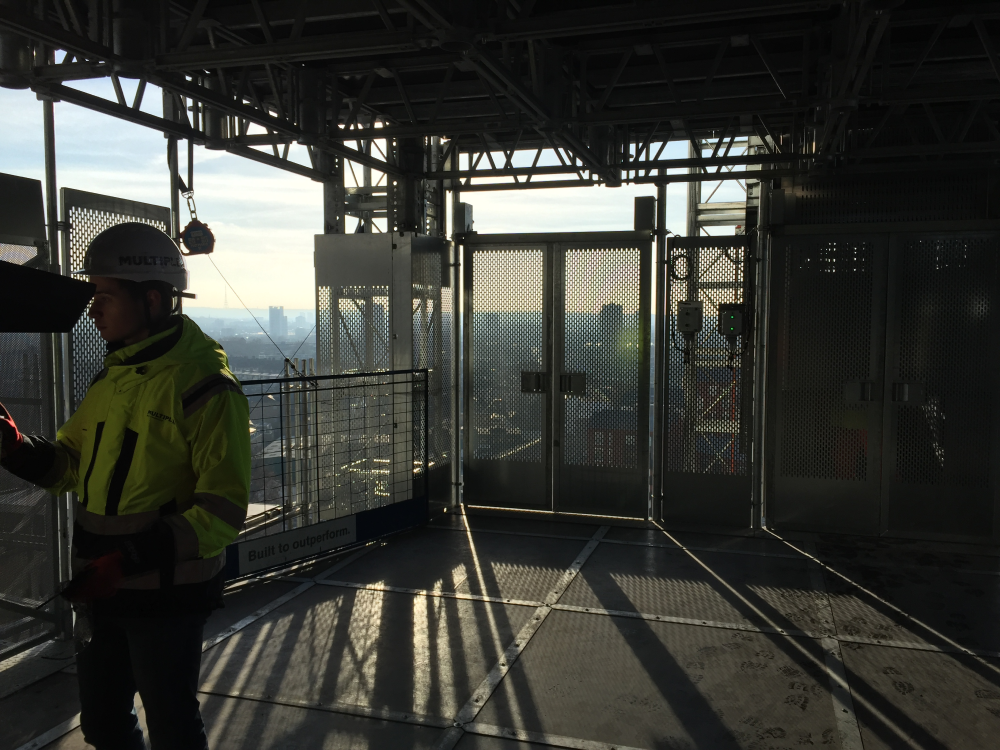 A special thank you goes out to the Multiplex project team at DAMAK Tower for hosting our program and preparing a fantastic visit for us! 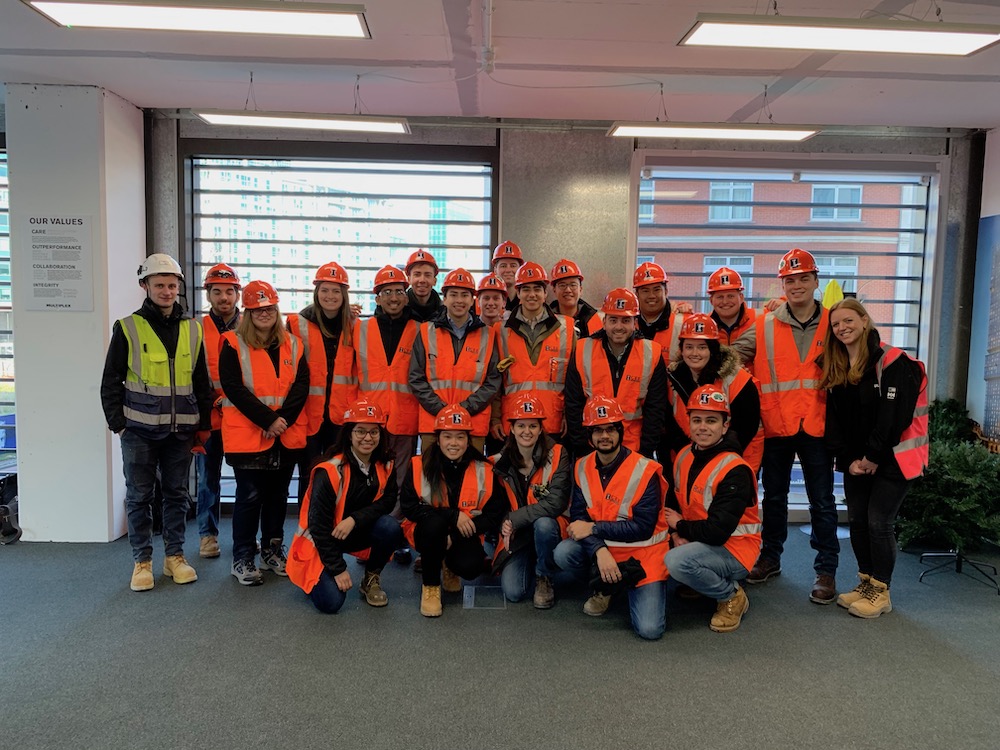