Tuesday brought more snowfall to Istanbul as we set out for another day of project site tours.  Our bus departed at 9am for the new Uskudar metro station which anchors the east (Asian) end of the nearly  completed Marmaray train tunnel.   This project is one of the signature projects that inspired the decision to make Istanbul our 2013 GLCM international destination.  Traffic in Istanbul requires us to  allow plenty of time, however this morning the trip went very well and we arrived with time enough to take a drive along the Asian coastal road and see more of the Bosphorous Strait (through the falling snow). 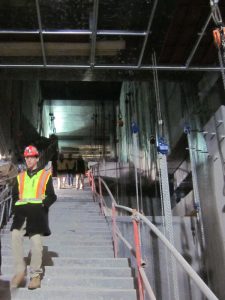 The Marmaray project is part of a 3 Billion Lira infrastructure investment that includes metro stations, track infrastructure, rolling stock, and a highly technical undersea tunnel crossing.  The crossing will provide a direct connection via train between Europe and Asia effectively in the center of Istanbul.  Construction work began in 2004 and the undersea crossing is scheduled to be completed by the end of September 2013.  Progress on the Sirkeci Metro Station has been delayed by archaeological finds during excavation and work will continue in this location throughout the rest of this year. 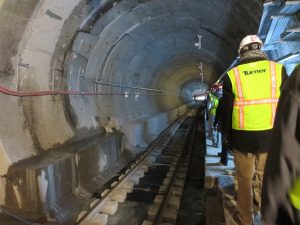 At the start of the tour we immediately began our descent into the earth via the metro station’s stair case that will eventually serve train passengers entering and exiting the terminal.   The entry stairs were concrete that will eventually have a finish material applied and escalator installation was ongoing.   The below-grade portions of the station were constructed using both 1) a diaphragm wall and cross-lot bracing and 2) top-down construction.   From the station to the undersea portion of the tunnel, a tunnel boring machine (TBM) was employed.  The undersea portion of the tunnel was constructed using submersible tunnel sections, each 100 meters in length. These tunnel sections include a steel tube with a layer of concrete outside the steel.  Earth at the sea floor was excavated; the tunnel sections were then sunk to the excavated sea floor and buried.  Eleven tunnel sections were all connected to complete the 1.1 km long undersea portion of the tunnel. 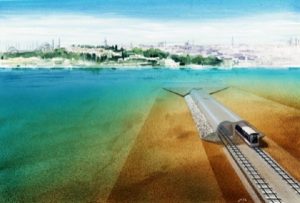 We walked along the side of the rail platform several hundred meters into the tunnel to observe the transition from the excavated station to the bored tunnel to the prefabricated submersed portion.  Concrete placement and electric cabling is ongoing.  Concrete is dropped from trucks at the surface to track level and carted along the rails.  Workers are also transported in and out of the tunnel using modified pickup trucks designed to ride the rails.  After benefiting from Istanbul’s superb metro, funicular, and tramway systems it was truly enlightening to see the metro station and tunnel construction in progress. 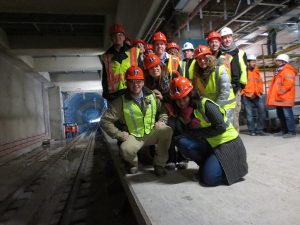 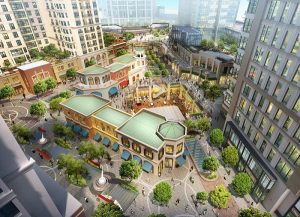 After a quick bite of lunch, we headed over to our next project site, New Istanbul Development. Although this project was not as far built as some of our previous projects, the staff at Turner provided an excellent discussion about their project, current challenges, and future plans. The project is a large residential and commercial design which is owned by Emaar and managed by Turner. It consists of seven towers, shopping centers, 6200 below ground parking spaces, cinemas, and even an ice rink. The construction will be about 62% below ground and 38% above ground. As the meeting progressed, it was clear that there were concerns with the design. Initially when Turner was brought on, the design team and owner had originally had the idea to separate the project between the North and South halves. Each half would be assigned to one contractor. Due to the design issues, this method was not feasible and Turner opted to divide the project up into multiple bid packages which will then be individually awarded. One item that was especially stressed with these different contractors and bid packages is the idea of domestic contractors. Tony Gordon, the project director, described this as the idea that each contractor will be solely responsible for each of their subcontractors. This will be crucial when they assign each of these bid packages. One of the interesting parts of this method is the progression of contract styles. Initially the packages will be awarded with performance contracts and will progress to lump sum contracts. These contracts will be awarded in a very similar way to how they are in the United States. 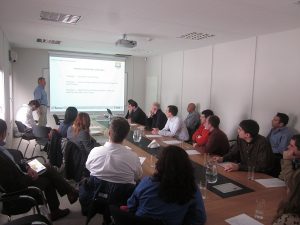 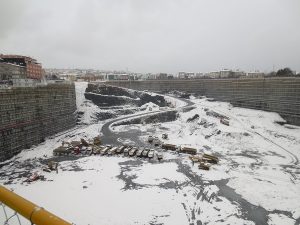 Currently, the project is still in its first phase, excavation and shoring. The project team had researched the feasibility of several different shoring methods including piles and slurry walls. After researching the different options, they decided to send out the RFP for piles with tie backs into the solid earth behind. The total perimeter included 1.2 km with three different types of pile shoring. The other main challenge with this first phase was the excavation. Since Istanbul is such a heavily trafficked area, there were several regulations and permits that the contractor had to obtain in order to complete the work. At the high points, there were over 600 trailers carrying over 10 cubic meters of dirt per day. Overall, this is a very complex project which is built on twelve different seismic joints and will use fourteen different tower cranes! During our meeting we talked about the aggressive construction schedule.  Although some of our previous site visits had a more relaxed schedule, this project has a clear deadline. Since Turner is the manager for this project, they will not incur any liquidated damages, however, the separate contractors will. This is one of the first projects that we have seen in Istanbul that has strict liquidated damage penalties. Overall, this site visit was a very rewarding experience for GLCM to learn and discuss Turkish construction as well as constructability issues. 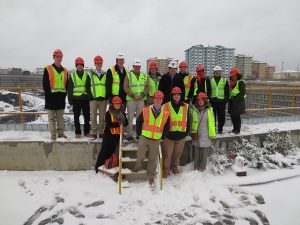