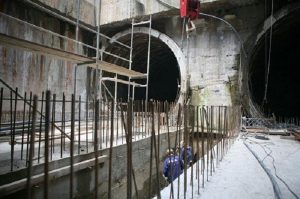 Our first tour in Romania started out by exploring a new subway tunnel in the heart of Bucharest. A multi-national, three company, joint venture comprised of Astaldi from Italy, FCC from Spain, and Delta from Romania. At this point in the construction, the crews have managed to hit the 50% completion mark. During our visit, they were prepping to dig two parallel subway tunnels that will connect previously constructed subway stations. An interesting part of this previous construction, was that they utilized top-down construction methods which consisted of casting slabs on the ground, then once formed, using equipment underneath the formed slab to excavate materials below. This process was repeated until the desired elevation was attained. 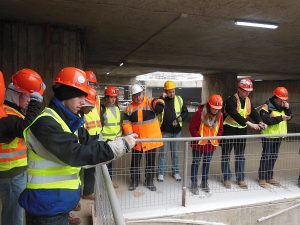 The highlight of our visit was the opportunity to see, up-close, a tunnel boring machine (TBM). This 100 meter long machine cuts the sand/rock face at only 20-24 meters per day (or about 1.5 rotations of the blades per minute), with the overall goal of completing this 6 Km long project. Because of the massive size of the machinery, it takes roughly 20 workers to set up a TBM and another 20 workers to operate it. 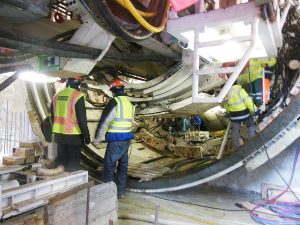 Overall, the project is estimated to be completed by the end of this year, with a final completed budget of nearly 300 million US dollars. It will connect with the existing subway infrastructure in Bucharest, but will also mark the first time that a TBM has been used in Romania. Because of this fact, contractors chose to use an oversized TBM to ensure the success of the project. 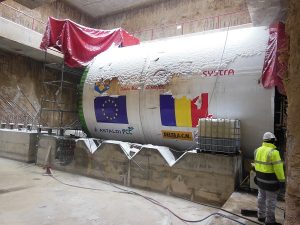 We had a great time on site, and learned a lot during our visit. The ability to see a TBM was a very unique experience and we truly appreciate the opportunity that the participating companies provided us with. 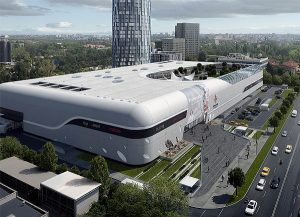 After grabbing lunch and warming up in the student cafeteria of the University of Bucharest Law Department, we visited the Promenada Mall project in Floreasca City. Floreasca is a booming, upper-class area of Bucharest in which Raiffeisen Revolution, a developer in Austria and Eastern Europe, has found the opportunity to invest in the construction of a high-end shopping center. Christoph Schuster, an ex-patriot from Austria and the project manager working for the general contractor of the project(Strabag) informed of us of the project details and took us on a site tour. 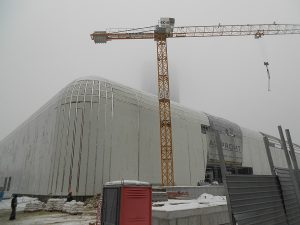 The concrete structure of the mall was created using a combination of slurry walls and top-down excavation in areas where tie-backs could not be used due to the  close proximity of subway lines. Strabag employed value engineering concepts which resulted in changes to the structural plan to include post-tensioned concrete floor slabs, a process which is not commonly used in Romania, but which significantly reduced the overall cost of the project. 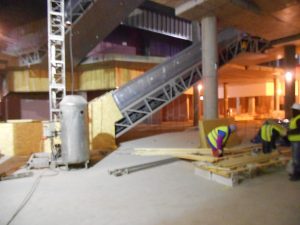 This 73 million Euro,150,000 m2 shopping center is scheduled to open on October 15, 2013 despite several challenges which have had severe effects on the project schedule. For example, during excavation last winter, Bucharest experienced extreme weather conditions including some of the strongest winds in history leading to a complete halt of work. Also,  several difficulties with the mechanical plan for the building has left the project 5 months behind schedule on MEP. Despite these delays, Strabag plans to complete the project before the initially planned opening date by increasing the manpower and shifts on site. Fortunately, the project has a large enough footprint to accommodate an extreme amount of laborers working at one time. Also, because there is no increase in wages for overtime work in Romania, the costs incurred due to the delays is expected to be minor. 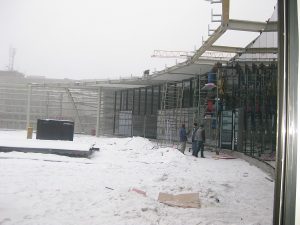 When complete, the shopping center will include three underground levels and three above ground levels. Two of the underground levels will contain parking with a capacity of 1,200 vehicles. A total of 140 shops will be dispersed among basement level 1 and the first two above ground levels. The top floor will contain a food court, a bowling alley, and a 7,000 m2 terrace which is planned to be used as an ice rink during the winter and as an open-air theater/entertainment area during the summer.The biggest take-away from this site visit was the opportunity to receive first-hand advice from a young engineering professional with international work experience. Mr. Schuster described the challenges he has faced while working amongst different cultures and his approach at facing those challenges.