The group got off to an early start this morning as we completed COVID testing in preparation for our flight back home to Chicago on Wednesday. After the testing was complete, we caught a bus to EUR, a district within Rome that is well-known for its fascist-era architecture. After a short ride, we hopped off the bus and began walking down Via Cristoforo Colombo, the main road cutting through the EUR neighborhood. 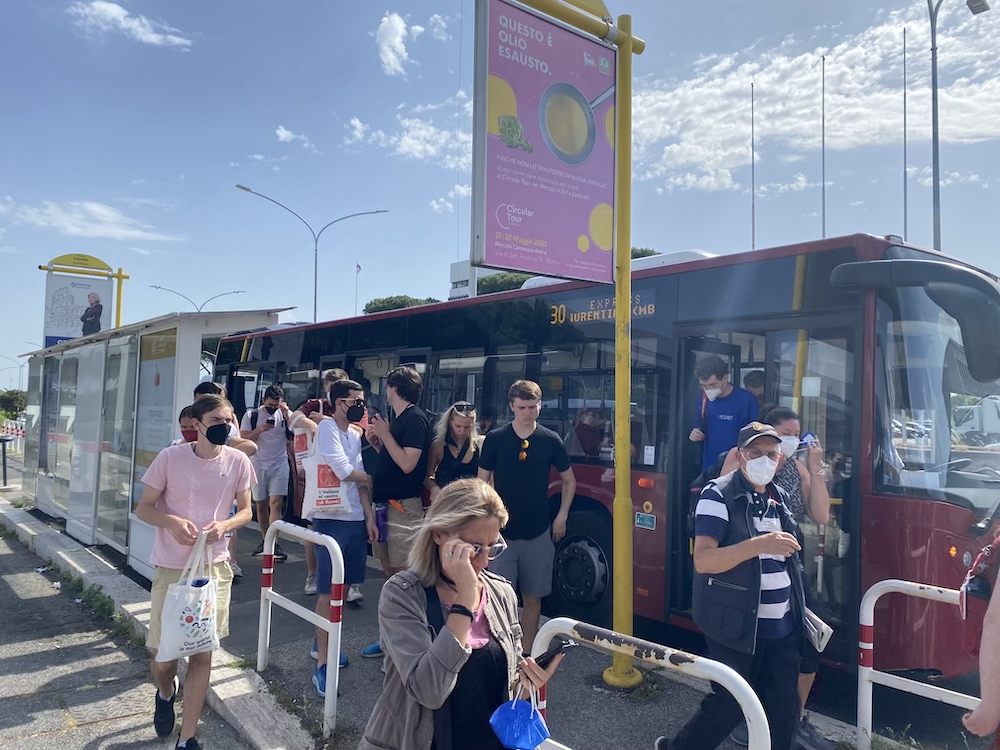 As we made our way down the street, our guide Tom shared the history behind the area and Via Cristoforo Colombo specifically, which is informally known as “Mussolini’s Road to the Sea”. We learned that the development of the EUR neighborhood was planned by Benito Mussolini in the 1930’s for the World Exposition that was scheduled to be held in Rome in 1942. The area was intended to display the strength of fascism on the world stage and to direct the expansion of the city of Rome to the West, towards the sea. However, due to the outbreak of World War II the World Exposition never took place and many of the buildings constructed specifically for the event sat empty and unused for years. 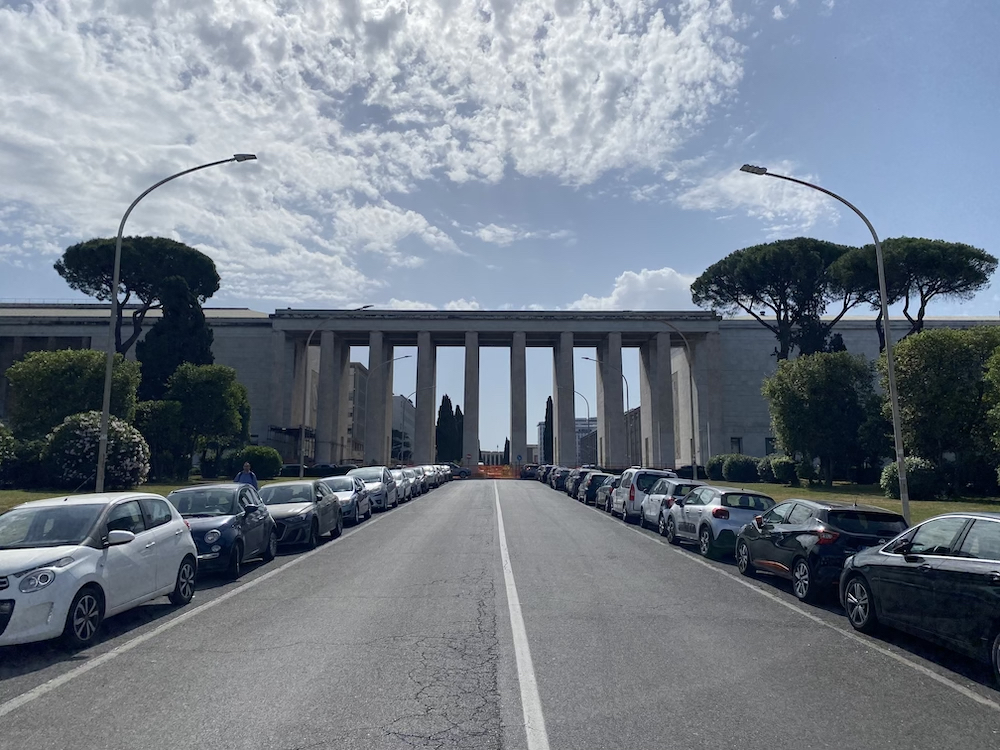 One of the first buildings we passed was the Museum of Roman Civilization, which was built to honor the Roman empire that Mussolini aspired to rebuild. We soon noticed nearly every building in the area was constructed in the same modernist-classical blend that categorizes Fascist-era architecture. Tom explained that Mussolini’s objective in this building style was to honor Rome as he thought of himself as a Roman emperor while also representing the modern power of fascism. 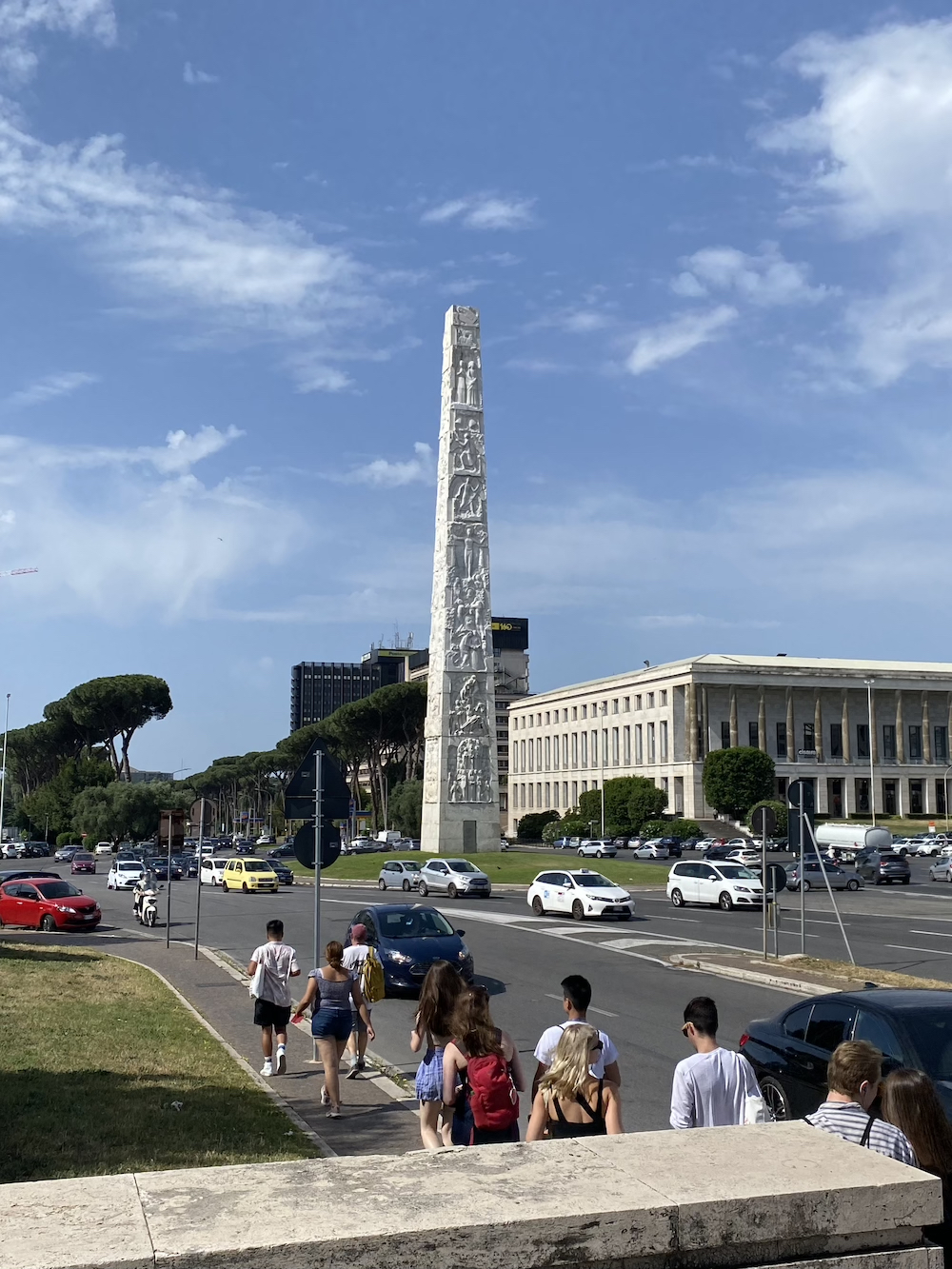 Further down the street we walked by the Marconi Obelisk, which sits in the middle of 4 lanes of traffic serving as the centerpiece in the EUR neighborhood. The obelisk was constructed in 1939 to commemorate the Italian physicist and inventor Guglielmo Marconi, who had passed away in 1937. Each of the marble panels on the 150-foot monument are adorned with engravings depicting key events from Marconi’s life and various religious symbols. 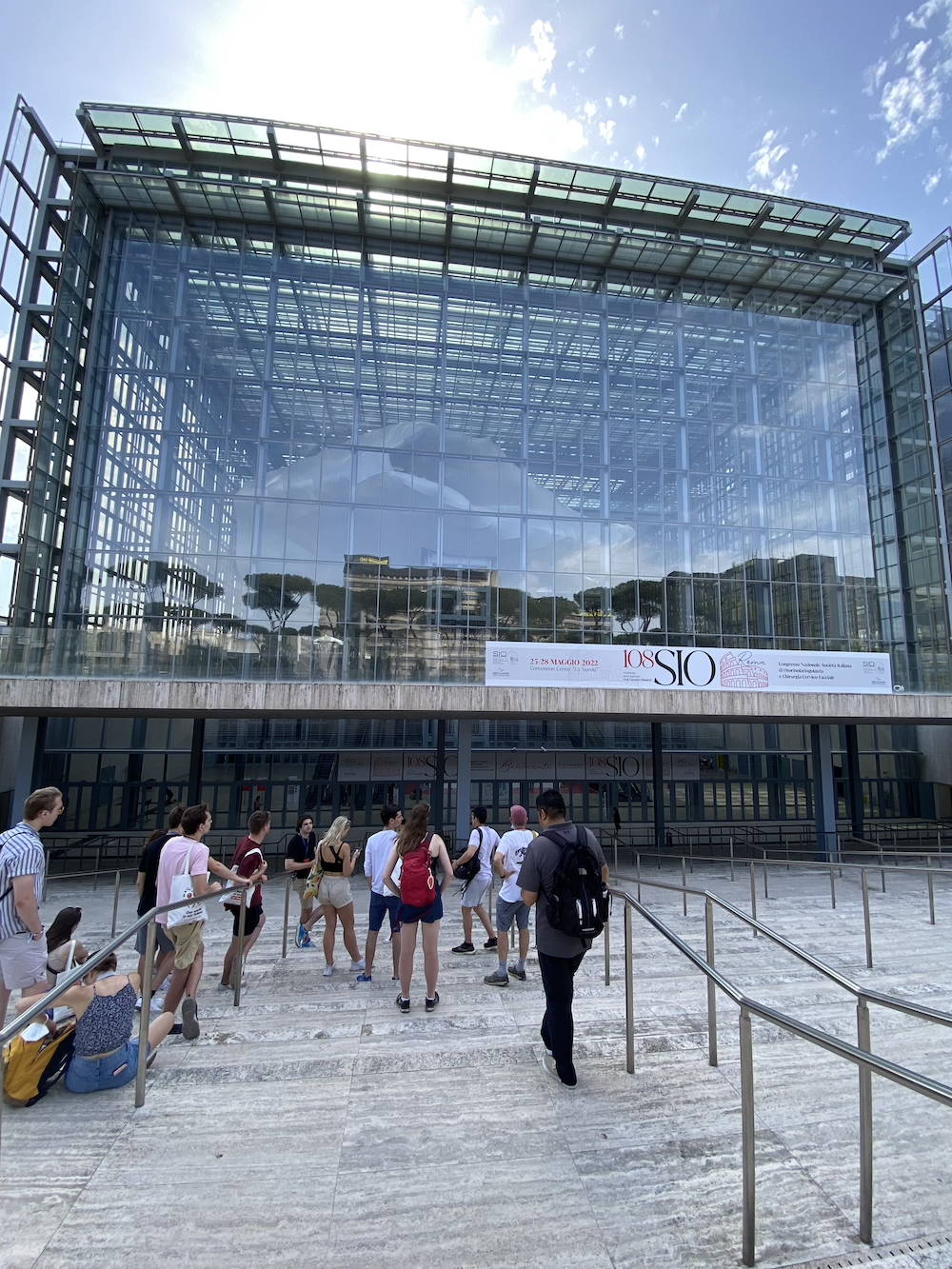 After walking about 5 blocks down Via Cristoforo Colombo we came across La Nuvola, or “the cloud” in English. The structure is aptly named as it resembles a white cloud contained in a glass box. Designed by renowned architect Massimiliano Fuksas, La Nuvola serves as Rome’s most high-profile convention center. The building is one of the few in this area that was not constructed during the Mussolini era, and as such, it was designed in an overtly contemporary style so as to distinguish itself from the surrounding Fascist-era architecture. After taking a few group photos on the front steps, we entered the building on the ground floor and explored the large 7,000 square meter room that sits below “the cloud” portion of the building. The building staff was preparing to host a medical convention in this lower hall, so we got to see the team executing their pre-event preparations. 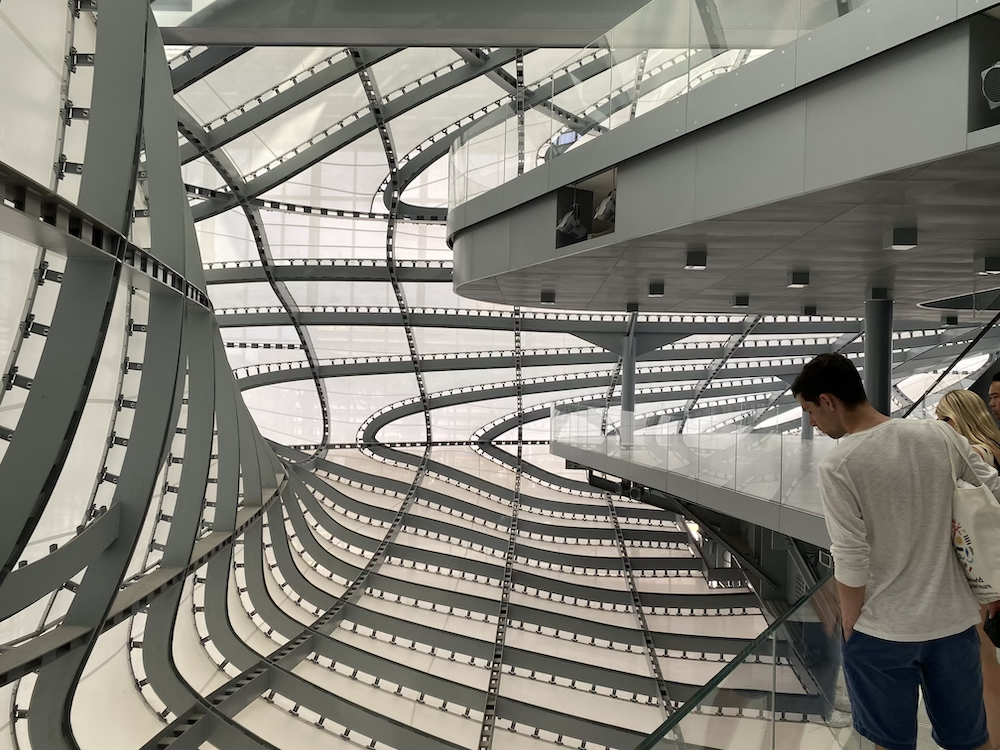 After a few minutes on the ground floor, we ventured up into the “cloud” structure via escalators. We were all shocked by sheer size of the cloud’s interior, as it offers 3 floors of space for various events and even boasts a two-level multimedia theatre with a capacity of 1,800. It was fascinating to observe the interior of the cloud, as we learned that the structure was created by stretching lightweight Teflon sheets across a massive steel frame. La Nuvola was undoubtedly one of the most unique buildings that we visited during our time in Rome. 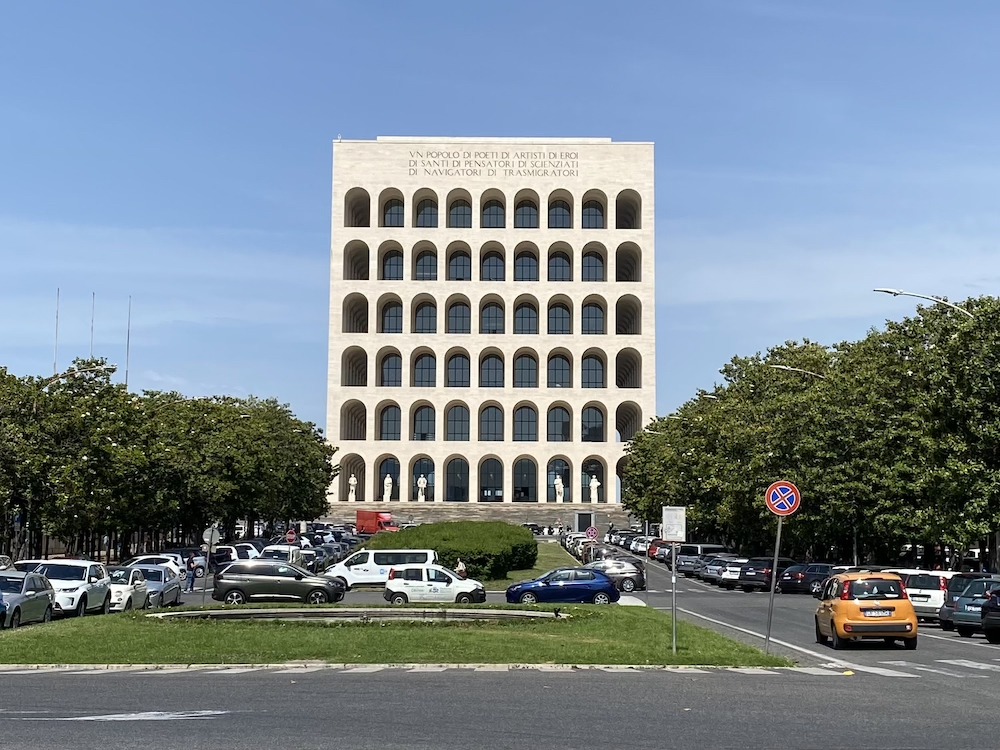 Our final stop in the EUR neighborhood was the infamous Square Colosseum. We learned that the building was initially designed by Mussolini to be the Museum of Italian Civilization for the 1942 World Exposition. However, like many buildings in the area, it never served its original purpose and lay empty for many years. The building draws inspiration from the ancient Roman Colosseum while incorporating the clean-line approach of modern architecture, once again aiming to portray Mussolini’s Italy as a historically powerful yet modernized regime. Our trip to the EUR district of Rome offered an incredible contrast between classical and modern construction and served as an incredibly visual reminder of Mussolini’s fallen fascist regime.