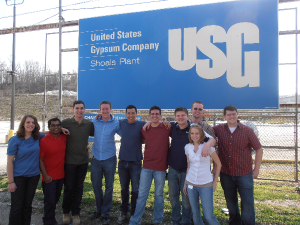 The first day of our 2012 spring break trip started in Shoals, Indiana. We arrived at the United States Gypsum mine and manufacturing facility which is located at the end of Interstate 650, the shortest interstate in the Indiana. Upon our arrival we were given a short presentation regarding the history of United States Gypsum, as a company, and the capabilities of this particular facility.  United States Gypsum, headquartered in Chicago, Illinois, was formed 110 years ago and currently is the largest producer of gypsum and its related products in the United States. In the past 10 year they have expanded internationally to Brazil, India, and much of Western Europe.

The Shoals Plant started production in 1955 when gypsum was discovered by people drilling for natural gas in the early 1950’s. The mine itself is approximately 400-500 feet underground where a 10-12 ft continuous seam of gypsum rock resides.  Something we found interesting was that the mine has a proven reserve to last 40 to 50 years given the current consumption rate of natural gypsum; however, this is variable due to the flux in the use of synthetic gypsum.  Although we were not able to go into the mine itself the meticulously planned blasting and extraction procedure was explained in detail to our group. Approximately 80-100 trucks loads of gypsum are extracted each day and are used in the manufacturing facility on the surface to produce wallboard, plaster, and plaster related products. They currently have 190-200 people working in the mine and manufacturing facility each day. They are by no means operating to the full capacity of the facility but like the building industry have seen signs of increased activity and demand in the industry, something that we were all very pleased to hear.

During the company presentation, it was also explained to us that the barrier to entry to the gypsum product business has been lowered due to the widespread use of synthetic gypsum.  In fact, the highest cost to USG is the transportation of the gypsum products.  Unlike many other manufacturing facilities, where each phase of the product is broken up, the making of gypsum is completed from start to finish in the same area.  In Shoals, the raw material (gypsum) is mined and the finished product of wallboard is then delivered to the customer’s door.  One such product that goes through this product is the Ultra-light board, which is an innovative wallboard that is thirty percent lighter while maintaining the strength of the older models.

After the company presentation, plant manager, Steve Melenchuk gave us a tour of the factory.  While walking through the facility, we could not help but notice the strong sulfur smell that permeates from the sulfate springs from a near by location.  One of the first stops on our tour was the five million dollar addition for equipping the plant to better produce the ultra-light board product.  Our next stop was the mill where the raw gypsum is extracted from the mine and ground into a fine powder while combined with other substances before being sent to the wallboard side of the plant.

Before taking a tour around the wallboard manufacturing machinery and equipment, we were exposed to the quality testing of the gypsum products, which includes mill testing (raw material powder), board testing (finished wallboard), and plaster testing.  One of the interesting parts from this part of the tour is that different geographical areas of the country prefer their gypsum products differently; therefore USG has to test many different variations of the same product in order to pass the product for these different areas.  If the product is found to be defective, then the crew must go to the warehouse and test the entire batch again.

Our next stop was to view the warehouse and manufacturing equipment for the wallboard.  While walking through the plant it was hard not to notice how clean the facility was, in fact they even have sweeping machines that drive throughout the warehouse to keep the floor virtually dust free.  The magnitude of wallboard was simply amazing, literally floor to ceiling high of wallboard, all organized in a system that works particularly for USG by delivery.  Within the facility there are three board component lines, two of which are used to produce sheetrock, while the other is used to cover sheetrock in vinyl which would be used as a finished ceiling tile.  These production lines produce sheetrock anywhere from 280 to 600 feet per minute depending upon the size and type of board.  In fact, the plant produces about 33 million square feet of wallboard a month.  One of the more interesting parts is that the gypsum is injected between the papers as foam, in order to keep the weight down on the finished drywall product.  Given the two production lines used for sheetrock, one of the lines is specifically used to make specialty board, which instead of using the traditional cardboard paper linings, uses a fiber glass paper lining in an effort to resist mold.  This type of wallboard will be used in the construction of elevator shafts due to the fact that elevator shafts are one of the first things to be constructed before full moisture containment and therefore has the potential to be exposed to the outside elements.