Our second stop on Monday was to the Independent Concrete Pipe Company in Indianapolis, Indiana. Independent Concrete Pipe (or ICP) was founded in 1912 by Howard Schurmann in Indianapolis. There work was originally done almost entirely in the field, on site, where they would set up temporary manufacturing plant and release a superintendant from the main office to oversee production. However, after the construction of a main manufacturing plant in 1932 in “Indi,” they have since moved production back a fixed site. 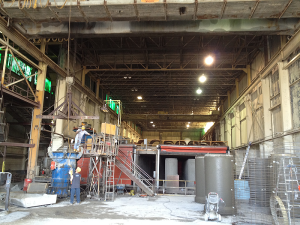 ICP has come a long way since the initial success of their patented “Independent Concrete Pipe” which allowed contractors to grout at much higher speeds and attributed to the high success the company found in the early 1920’s. Today, ICP produces a range of products including: sanitary sewer pipe, storm sewer pipe, culverts, elliptical pipe, jacking pipe, box culverts, hy-span bridges, and temporary median barriers. 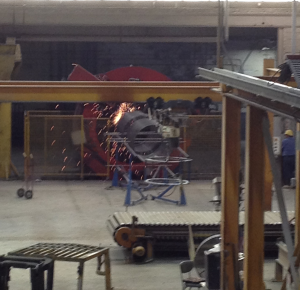 Our visit today included a tour of ICP’s production facility as well as two informational presentations from ICP’s very knowledgeable staff Steve Smart and Erik Carleton. We looked at the production process for dry cast concrete including the mixing of materials, form placement, cement pouring, ring installation and pre-curing.

Dry cast concrete has a number of unique characteristics. For example, the only way to remove air voids in this particular type of concrete is to use vibration equipment only on the outside of the concrete formwork; it is too dense and stiff to use the traditional vibratory techniques inside the formwork. In my opinion, the most unique and amazing aspect of building dry cast concrete pipes is the efficiency of the process, which is due to the fact that this concrete does not need to set before the formwork is removed. The formwork can be removed immediately after the concrete has been poured, vibrated, and compacted. This allows a pipe to be formed and stripped of formwork in roughly 4 to 5 minutes each! Also, before the installation of automated processes, the production used roughly 15 workers to create a pipe, but now they can run the automated operation with only 6 people. Further, if they were to choose to do so, the process could be run 24 hours a day without interruption. 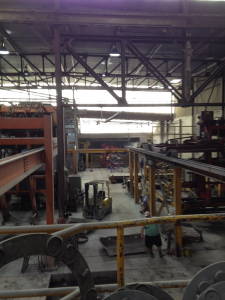 Due to very low water to cement ratio (roughly 0.35 to 0.38) of this concrete, it can be compacted by hand into something similar to a snowball, and it has a zero slump when tested using the time-honored slump test. This mix allowed for higher strength than ASTM standards required but also used slightly different testing procedures. Cylinder breaks are still required, but it is nearly impossible to perform rod compaction. So instead, testers have to place cylinders on a vibrating rig with a weight compressing each lift of cement until a noticeable liquid accumulation is found at the top. Further tests to ensure the safety and performance of their products include gradation tests, gasket tests, and joint tests. 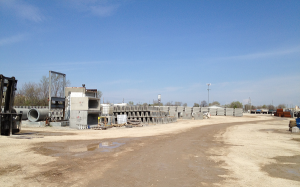 Besides learning processes within the plant, we were also given an in-depth analysis of the three and four sided precast culverts that ICP produces. We learned that there are two types of precast culverts: standard and oversized. Where standard culverts range from 2’ to 12’ spans with 1’ incremental rises and oversized are 13’ to 24’ spans with a 4’ to 8’ rise. For reference, a standard 18’x8’ culvert weighs roughly 42,000 pounds (or 24tons). 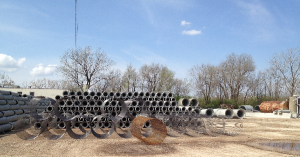 All in all, this trip was very informative and highly valuable to us as future project engineers. It gave us precious insight into what goes into products that are used in high quantities of infrastructure projects and allowed us the chance to experience the culture behind the scenes of many construction projects. In my opinion, it would be highly advisable for more project managers to learn what goes into the manufacturing of the construction products we use every day. Construction material venders are often an invaluable source of information for designers and contractors alike, especially if you are working with the great folks at Independent Concrete Pipe Company.