Today, we were fortunate enough to visit the Kearl Oil Sands project, jointly developed by ExxonMobil and Imperial Oil. Upon completion, this project will be an oil mining facility with minimal onsite processing. The type of extraction performed at this finished facility will be open pit mining. In open pit mining the top soil and overburden layer are removed, exposing the homogeneous mixture made up of sand, water, and oil. Extremely large excavating equipment removes the sand mixture which is then transported by specialized dump truck to a nearby location to be crushed into manageable sizes. It is then carried by a conveyer system through various steps that separate the sand and water from the oil, known as bitumen in its crudest form, through the use of non-potable hot water. This bitumen is then diluted to produce dilbit which is transported via pipelines to Chicagoland refineries.

This project is in many ways different from the typical world of commercial construction. First of all, the sheer size of this project dwarfs any project site to which we have ever been exposed. The process and facilities under construction cover an area of approximately 6 square miles with a budget of more than 8 billion dollars. The total mining area, which is leased from the Alberta government, is approximately a 100 mile radius from which Exxon has a designated portion. Once fully operational the facility will produce 110,000 barrels a day with a planned expansion to increase production to 345,000 barrels a day. Imperial Oil and Exxon Mobil have chosen Flour as the project manager and are working with other world-class contractors such as Kiewit, PCL and CB&I to accomplish this feat. 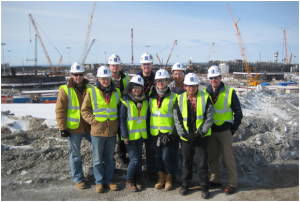 Secondly, the site is in a very remote location. It is approximately two hours north of Ft. McMurray along highway 63, the only artery in and out of the construction site. It is also the most northern point to which paved road access is provided. Traveling beyond the Kearl project site can only be done through boats or on ice roads during the winter months. To ease the transportation problem to this remote location, an airport facility has been constructed.

The extreme remoteness created additional challenges of production and staffing. With the lack of available work forces, costs of production are typically doubled and can be as much as twenty times more than that of off-site fabrication, thus making off-site modular fabrication optimal. The processing plant was designed and fabricated off site, and transported on large semi-trucks as modules. The immense modules were then lifted and positioned into place with the use of cranes. This modular construction minimizes the work that has to be performed onsite providing a significant cost savings to Imperial Oil and Exxon Mobil. However, there have been recent obstacles which make this modular solution more difficult. Due to government restrictions on size, the prefabricated modules from Korea have not been allowed to be transported as a whole to the site. Instead it is required that they be cut down into smaller portions to be hauled to Kearl Lake without disrupting traffic.

Finally, staffing and housing all the construction workers and management is required due to the remote location. To construct this large facility, 3,500 individuals are working and living together in the Wapasu temporary ‘man-camp’. These newly built, ‘dry’ quarters are comparable to college dormitories with vast amounts of amenities and world class dining facilities. There are also security teams, medical professionals, and firefighters on site to provide a safe and pleasant living environment. 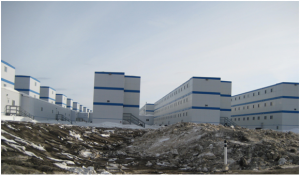 This site tour gave us insight into the incredible world of heavy industrial construction. It was surely an eye opening experience and something that can only be fully appreciated firsthand.