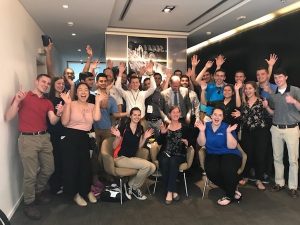 Walking into the lobby of Intercontinental Plaza, the global leaders crew admired the upscale interior design. A team member from IRSA welcomed us. Being ushered into a large conference room, we met Jorge Mandachain and Carolina Montecino. Jorge introduced himself as the head of development and operations at IRSA. He presented the IRSA as a prominent real estate development company in South America. Owning 67% of the market share of shopping malls and a significant office portfolio in the Buenos Aires metropolitan area, IRSA’s real estate business cycle has played a vital part of their success. 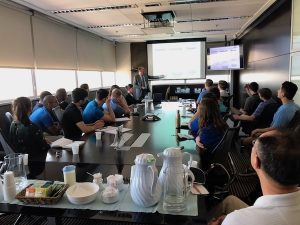 IRSA first identifies the business opportunity. Most of the land that IRSA owns is through acquisitions, grants, land swaps, or barters. In order to maximize the value of the building, they decide whether the land requires development or improvement. Sometimes, IRSA negotiates with authorities for approval to change the zoning. Currently owning six office buildings in Buenos Aires, IRSA rents out the office space to many large international companies, such as General Electric, Exxon, Samsung, Microsoft, Facebook, to name a few. In addition to commercial real estate, IRSA’s subsidiary, CRESUD, is involved in the farmland real estate. By using a similar development process, CRESUD buys land in rural parts of South America to develop the land to accommodate for agricultural use. While analyzing whether to sell the land, CRESUD continues to maintain and operate the farmland. 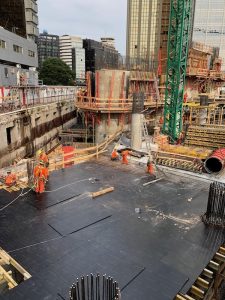 The following morning, the global leaders team had the amazing opportunity to visit one of IRSA’s current construction sites. Located in the upscale neighborhood of Puerto Madero along the waterfront, Torre Catalinas is one of the properties bartered and being developed into an office building. Construction has been ongoing for 13 months with DYCASA as the general contractor, which is also known as the main contractor in Argentina. As the owner and developer of the building, IRSA hired a professional construction management team from Groupo Syasa as the owner’s representative. In Argentina, it is common for owners to hire construction managers, who have the responsibility of overseeing the general contractor and reviewing their payments, change orders, schedules, etc. 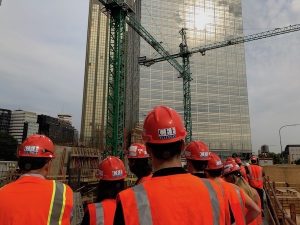 Our tour was split into two groups with the project manager of DYCASA and Alejandro, the construction manager of Groupo Syasa. Some of the unique aspects of this construction project were the sequencing of the core and slabs and the lack of staging area. Because of the shape of the building being a triangle, it is important for the core to be completed on schedule because it is in the critical path. In the case of Torre Catalinas, the core is done two levels ahead of the slabs, and then the slabs are completed in alternating order of left and right sections. To combat the lack of staging/laydown area, they decided to construct the ramp into the underground garage at a later time so that it could be used in lieu as staging/laydown area. Another interesting feature is the temporary retaining wall necessary for the slab tie-ins because the vibration of the highway adjacent to the edge of the building applies too much compression to build the permanent retaining wall. IRSA is very proud of this project because it will be a fine addition to the beautiful skyline in Puerto Madero.