Day three of our trip started at the Y Hotel Hyde Park in Sydney, Australia.   At nine in the morning we were picked up and shuttled two hours North of the city to the Mt. Owen mining site.  Mt. Owen is coal mining facility that is operated by Thiess, a subsidiary of Leighton Holdings, and owned by Xstrata. Upon our arrival at the site, we were greeted by the Project Manager of the mine, Jeroen Hendriks.  After checking in, Mr. Hendriks gave us a brief introduction as to what transpires at that facility. This was followed by lunch with a large number of Thiess’ staff, including two of the site superintendents, Craig and James, whom would be our tour guides for a large portion of our visit. 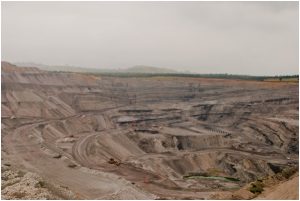 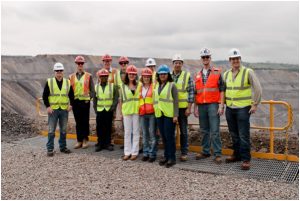 After a more detailed investigation of the operation practices and the massive equipment used at the site we were taken to the main observatory of the mine.  Here we were able to actually see the immense scale on which these people work. The mine itself is approximately 270m deep, one of the deepest in Australia. Having been operational since 1996, it is also one of the most mature mines in the entire country.  At this point we were able to ask the Craig and James questions about specific mining practices. For instance we found that the mine needed to produce 80,000 tons of coal throughout 2012. This will be achieved by mining the coal from two seams, coal deposits, in the center of the mine.  Although these two areas will be able to yield the necessary amount of coal, other areas will have to be worked on to make more room for dumping of waste material. This last point is what makes the mining process more difficult. Essentially the mine is an enormous jigsaw puzzle, where the end result is producing the necessary quota of coal. 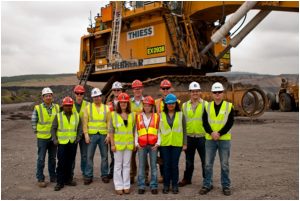 After leaving the observatory, on our way to the mine’s equipment maintenance facility, we stopped and looked at an out of service excavator. We were told that this specific piece of equipment was a “dinosaur” and it was not feasible for it to be repaired.  This is understandable after approximately 75,000 hours of operation. 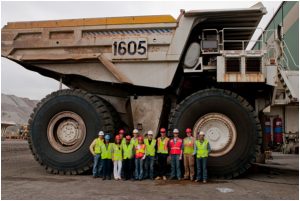 Our day ended at the mine’s equipment maintenance facility. Here we were shown around by a variety of different individuals. They told us about their capabilities, which basically included a full service shop, where only very unique equipment issues had to be solved off site. One of the best parts of this portion of the tour was the fact that we were able to get up close and personal with on for the 300 ton payload Hatachi dump trucks.  As one can see in the above picture the tires alone are almost 12 ft tall. This was a wonderful way to conclude the third day in Australia, awestruck by the sheer scale of the equipment use by the staff of Mt. Owens, something that they consider nothing more than another day at work.