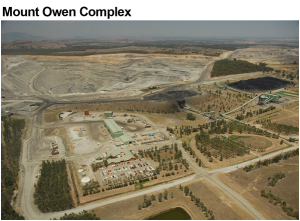 Located 25 kilometres north-west of Singleton in the Hunter Valley, the Mt Owen Complex is Thiess’ largest coal mining operation in New South Wales, currently producing 8.2 million tonnes run of mine (ROM) coal per annum.Operated by Thiess under a 15 year agreement, Thiess performs all mining activities at Mt Owen. Thiess also provides coal beneficiation, onsite blending and rail loading. The North Pit is a highly-productive open cut coal mine, consistently achieving good safety outcomes and a competitive cost of production. In addition to operating the mine, Thiess designed and constructed the mine infrastructure, including the beneficiation plant and rail loading facility. Thiess also supplies all the mobile plant and equipment necessary to conduct mining operations.

The deposit is complex and consists of multiple seams of coal dipping at angles between two and 45 degrees and varying in thickness between 0.4 and 9 metres. Most of the coal dips at an angle greater than 10 degrees. Mining is carried out to a depth of 270 metres below the surface, with the mining of the deposit being essentially similar to mining an ore body rather than a typical strip mine.

Thiess has developed processes such as through-seam blasting and is recognised as an industry leader in this process and in equipment selection. The coal is treated in a Coal Preparation Plant with a current capacity of 14 million tonnes ROM per annum. The average yield is 60 per cent, with product coal being loaded onto trains for export through the Port of Newcastle.

Thiess operates the facility at name plate capacity, processing ROM from adjacent Xstrata mining operations. The incorporation of noise attenuation measures in the majority of the fleet at the Mt Owen Complex has ensured the long-term viability of the mine through Thiess’ ability to meet stringent new environmental standards.

Mt Owen’s success results from Xstrata’s marketing and Thiess’ operating expertise. The parties recognise that the success of the project delivers benefits for each entity and the expertise of each party is used in a complementary way to maximise project outcomes. 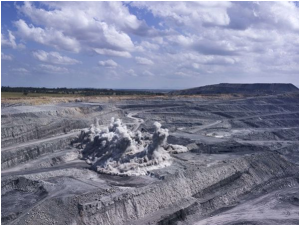 The Leighton Group has evolved significantly from the construction company of its origins over 60 years ago. Founded in Australia in 1949, the Company listed on the Australian Securities Exchange in 1962. Growing organically and via acquisition, the Leighton Group is now one of the world’s major contracting, services and project development organisations, and the world’s largest contract miner. Leighton Holdings has its head office in Sydney, Australia.

Each operating company functions independently with its own Board and Managing Director, with management encouraged to innovate and be successful in an autonomous manner. However, this autonomy occurs within a corporate governance framework defined by the Company, which sets standards for: ethical and financial performance; risk management; health, safety and rehabilitation; and community and environmental matters. The Leighton Group’s operating companies directly employ over 51,000 people.