G’Day Mates! We started off our second day of the Australia trip with a visit to the Lend Lease worldwide headquarters at “30 The Bond” on Hickson Road. At the office, we met with Trish Arnott, communications supervisor of “Bond Support”, who gave us a tour around the building and an insight to their working culture/environment. After the office visit, we met with John Salier, head of construction of the Barangaroo south project, who gave us a presentation on the scope of the project and its unique features.  We ended our day with some cultural activities. 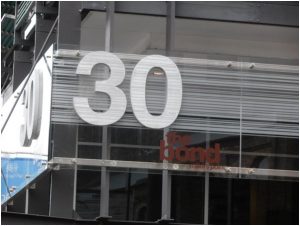 The Lend Lease Headquarters building is located at the edge of Sydney Harbor in Millers Point, New South Wales (NSW). Before moving to Australia, the headquarters used to be situated in London due to the large volume of projects in the United States and the United Kingdom.  The current headquarters has been certified as a 5 star green star building by the Green Building Council of Australia (GCBA) and, as of now, holds about 131 architects and engineers. 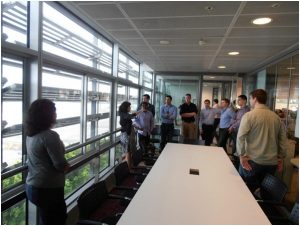 The design of the current Lend Lease headquarters took an interesting approach to incorporate the needs of as many of their employees as possible.  The employees were divided into task forces, where each one concentrated on different attributes that could “improve” the working environment. According to Trish, a lot of the employees focused on “green building” i.e. they requested for water/energy efficient systems. Although such a practice is fairly common now, this “task force procedure” was carried out before the sustainability era hit.

An example of how these systems had been implemented can be explained by the utilization of chilled beams throughout the building.  These beams consist of pipes of water, which chills the air around the beam. As a result, this mechanism requires less energy than the conventional A/Cs and helps achieve the sustainability goals. 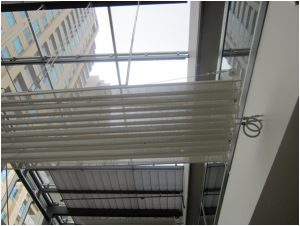 The Barangaroo South project that we had visited today includes the development of the Sydney Harbor, which was previously used to exchange and organize sea containers coming in on trade barges.  As the project is still in the preliminary ground work and site preparation stages, we were able to see first hand the installation of the bentonite slurry wall and caisson pilings which will serve to support the foundation of the three towers that will be constructed in years to come.  As we toured the site, we were able observe some interesting machinery that is not on a typical jobsite in Illinois.  One particular machine was the hydraulic mill, which was used to excavate existing land to install the slurry wall. 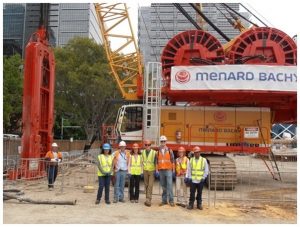 As with many jobsites in Chicago, every bucket of soil extracted must be remediated and hauled off to a special hazardous dumpsite.

Another interesting aspect of the current construction was the water treatment center that is set up to treat the site water, which will be disposed back to the ocean.  This system is a necessity due to the fact that before the area was used to house sea containers, it was the cite of Gas Works, in a time before the wide use of electricity to power the Sydney operations. 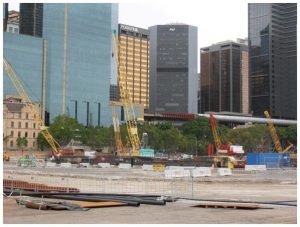 As of now, the cite is over equipped with the treatment, however this will be needed in months coming when the foundation construction is underway in order to treat the water that is encountered during the pit excavation.

Overall, the project is well on its way to becoming the sustainable 6 star green star rated addition to Sydney’s west harbor.

After our site visits, we were able to part take in some tourist activities around the Sydney area.  Some of the activities included a trip to the zoo and aquarium where we were able to pet the koala bears!  Others of us were able to visit Bondi Beach, where we took a swim in the ocean with the crashing waves.  Cheers! 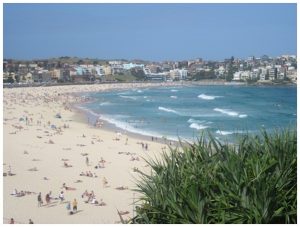