In the morning of January 11th, we met with Brad Smith, the project manager of the Portside Wharf Hamilton Project. He briefed us on the history of the entire company, his personal background, and then discussed the project.

Multiplex started in 1962 in Perth and it was bought by the Canadian firm, Brookfield. In 1990s, the company started its branch for development and capital. Also, only 12 months ago, the company started its engineering and construction division in Perth. Brookfield Multiplex has a very diverse portfolio with 39% commercial, 30% health, 12% hotel, 7% residential, 5% retail, 4% education and 3% infrastructure.  As differentiation from other companies, Brookfield Multiplex includes facility maintenance with their projects. Smith emphasized that the company’s motto is not to finish projects on time or on budget, but to outperform any other builder. Before becoming a project manager, Brad Smith was a carpenter by trade. 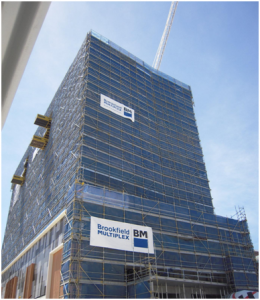 The Portside Wharf Hamilton Project is in stage 2, building the fourth building. The project is unique because the builder, designer and developer are all Brookfield Multiplex. The company bought the land 2 years prior to the start of the project due to the harsh economy. The Portside Wharf Hamilton Building will have 172 apartments, out of which 100 units are already sold. The basement will be parking, while the ground through 4th floor will be retail space. Levels 4 through 15 will be apartments and level 16 will be a plant floor. Level 4 and 5 will be fully completed prior to the rest, as pilots.

The entire 1,600 square meter building is post-tension structure with approximately 5 load transfers. The project building cost is $75M and the developing cost is $9M. There are 230 workers on site. In terms of scheduling, the project is 4 weeks late, being at 55% completion for fit-out and 100% completion for structure. The expected completion date is May 2012. 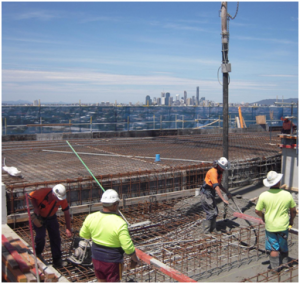 During the site tour, Blake Hawkins, the site manager, expressed that formwork could have been improved at the beginning of the project which would have affected the entire progress overall. Otherwise, he thought that the biggest challenges were time and logistics. Walking through the building we noticed that the partitioning was different. They used a double track partition, to allow the air in between to cancel noise. The ceiling was raised for acoustic purposes as well. 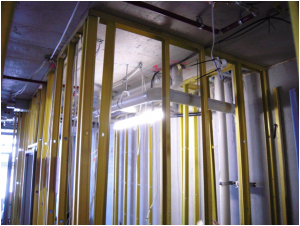 The project is not Green Star rated but it has 80% recycling and has the ability to upgrade the serviceability to Green Star standards later on. Safety was very important on site as well, any dark area regardless of work happening around it or not, was illuminated. Overall, we were impressed by the openness of the project team and the project’s details.

Following our visit to the Brookfield Multiplex site, we traveled to the offices of CB&I on the outskirts of Brisbane.  CB&I is primarily a large storage tank constructor, for resources such as LNG, or liquid nitrogen gas.  We arrived at the office around noon and were greeted by our host, Mr. Andrew Hackworth.  Mr. Hackworth is the Director of Business Development for CB&I in Australia.  After welcoming us to the office, Mr. Hackworth showed to the conference room, where we met several members of the CB&I staff for lunch.  For roughly an hour we were allowed to talk with their representatives about their experiences in the industry, as well as our own.   Among the people we spoke with was Mr. Bob Cross, the welding supervisor for their warehouse, who shared that over his 40 years of experience, the biggest change in the industry he noticed was the growing importance of safety.

Following lunch, we toured the CB&I warehouse where their construction equipment is kept.  Mr. Barry Masters, the warehouse supervisor primarily led the tour, and explained to us the process through which equipment is allocated to projects.  The warehouse itself is relatively small and only two years old, but is intentionally kept very clean as it manages the tools for all of Eastern Australia, as well as support for Western Australia, Dubai, and the United States.  The primary tools kept indoors are the arc welders, the most important tools for tank construction.  We learned that most of the arc welders, supplied by Lincoln Electric, have a life span of 20-30 years, and are serviced in that warehouse. In addition, we were shown many of the various clamps used in tank construction, and we learned about the safety and maintenance policies for the clamps.  Also inside the warehouse, we were able to see the most modern version of arc welders used by CB&I, capable of 600 amps and 45 volts (in comparison to the 120 amps and 22 volts achieved by a normal arc welder).  Finally, we saw the AVW, or vertical welder, which is another of the critical components to tank construction, as it allows CB&I to be more profitable, with decreased labor costs, and the capability of recycling weld material that isn’t used. 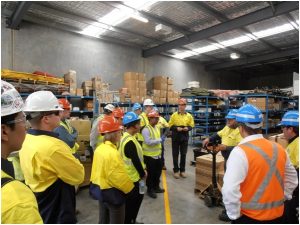 In the yard outside of the warehouse, we saw some of the large equipment used by CB&I.  First, we saw the steel scaffolding which is attached to tank walls to give laborers a place to stand while they work. Generally 3 or 4 pieces of scaffolding are used, which add weight but are necessary for safety.  We also saw the fans used on site, as well as the generators which are used in more remote locations.  Finally, we took a look at the single sided frames used to handle the welders in the air, as well as stacks of key plates.  As explained by Mr. Masters, these key plates are used to “hold things up”.  These key plates are welded on with nuts in order to hold the tanks components together.  These plates must be installed precisely, as a 12 m plates will only be allowed 3 mm of tolerance.  From that point he also went on to explain how shims are used in tank construction, as well as the most important point that tanks must be level in order to avoid problems such as bubbling for the LNG stored inside. 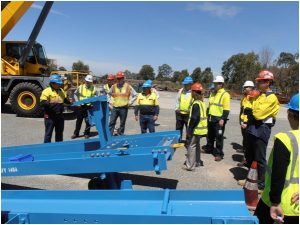 After returning to the office around 2:00, we received a short presentation about CB&I from Mr. Hackworth as an introduction to the rest of our afternoon.  CB&I was founded in the 1880’s and has always built storage tanks, but bought more companies to enter into the production sector as well.  It is a midsize company in comparison to larger companies such as Bechtel and Fluor.  CB&I has been active in Australia since its first office opened in Sydney in the 1960’s, and today almost 50% of all tanks in Australia were constructed by CB&I.  Mr. Hackworth continued to explain his role in sales.  CB&I looks to cater to large companies such as Exxon, and has always strived to address the exact needs of companies in order to be chosen as the tank constructor for their operations.

Following Mr. Hackworth’s introduction, we heard several presentations from the members of the CB&I staff, beginning with Mr. Scott Traynor, a project construction engineer.  His discussion was about the various engineering job roles that exist.  Mr. Traynor himself has held many of them, including Graduate Field Engineer and Project Engineer,  on many of CB&I’s largest projects, including the $2 Billion Gorgon project.  He emphasized the importance of graduate engineers identifying what their goals and interests are entering the industry.  He also gave an introduction to each of the major engineering roles at CB&I: Construction, Engineering Design, Procurement, Subcontracts, Quality, and Project Controls.  Many of these roles related directly to topics we have studied at school, such as the use of Primavera scheduling software in Project Controls.  After discussing his experiences in Perth, Port Hedland, and Townsville, he left us with important advice regarding planning: “Always think of the worst case, and think of the consequences two steps ahead.

The next presentation was from John Price, the Health, Safety, Security, and Environment Manager from the Gladstone project.  Mr. Price is now in his 10th year with CB&I.  His presentation revolved around safety, which is a top priority at CB&I.  The safety process begins with employee induction, but is followed up with training and observation in the field.  The Behavior Observation Program implemented by CB&I is a major component of employee evaluation.  In addition to the training and observation, other measures are taken as well to insure safety in the field.  Each week, a safety person is chosen on each project to enforce safety.  Mr. Price also emphasized that the same measures are taken with subcontractors, as they are considered part of CB&I during projects.  Mr. Price also discussed height safety, and the importance of having proper scaffolding and requiring harnesses.  Having such strict specifications on scaffolding is part of CB&I’s continuous improvement.  Despite the cost of shipping the custom steel scaffolding, they are faster and safer to use, allowing CB&I to maintain a competitive edge. 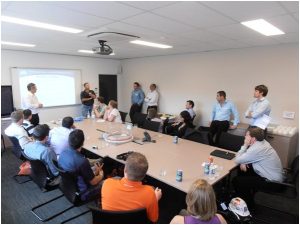 The next speaker was Brody Baker, a project engineer for the PLUTO LNG Tanks from 2008-2010, who discussed the construction process for LNG Tanks.  A typical LNG tank is maintained at -160 C, with a 90 meter diameter and 40 meter depth.  The foundation is a concrete pad with extensive steel reinforcement, and liners holding the concrete in place.  From that point, stock plate are continually placed and welded into the cylindrical shape of the tank.    Then, a crane is used from the outside to drop roof pieces into the center of the tank.  The shell and roof are the primary activities on the critical path of tank construction.  When the walls are complete, compression bars are placed around the top, with strings attached to the bars securing the roof.  Once the structure is air tight, fans are used to pump air into the tank, and the tension cables raise the roof into place where it is welded into place.  After this, panels are placed as slip forms to pour the concrete walls, and eventually the roof.   The roof includes studs, and a steel stair case is also placed before completion.  During this process, extensive insulation is placed inside, as well as service monorail installed along the ring of the roof.  The final step is the installation of single-use relief valves, which use a small thread of material to hold the valve together until the pressure is exceeded, so that large amounts of air can be released to relieve the tanks.

The final speakers were Anthony Ross, a project engineer, and Bob Sirmais, one of the QA/QC Managers.  Mr. Ross discussed the difficulties of construction inside an operating facility through a case study.  The challenge was to demolish 2 tanks and rebuild 1 tank in the facility.  He mentioned the importance of considering new hazards, such as the proximity to active tanks, residual chemicals, and equipment placement.  These can present problems such as a spark hazard with welding machines.  Also, we learned that weather has the potential to have a large impact on CB&I’s work.  Finally, other considerations are the additional noise, odors, and operations.

Mr. Sirmais concluded the day’s presentations with a discussion about the Quality Assurance, Quality Control, and Quality Management processes at CB&I.  Their quality management plan revolves around the same ideas most of us have learned about at school: identifying customer needs, planning, implementing the plan, monitoring and controlling the process, and ultimately improving the process.  QM is emphasized as a responsibility of everyone at CB&I, not just the QA/QC staff.  Finally, he reviewed the material testing methods used by CB&I, including tensile, bending, impact, hardness, chemical, and compression testing.  An example of each type of test was passed around the table for everyone to see as well.  He said that the biggest problem encountered by his staff is the client demands for more ductile materials which are still able to pass the hardness requirements.  He ended his presentation by mentioning some of the non-destructive quality control methods used by CB&I, such as magnetic testing and X-Rays, as well as sharing pictures of failed tanks and how those problems could have been avoided.  Overall, our group had a great experience with the staff of CB&I, and the day’s presentations were a great way to end our studies in Australia.