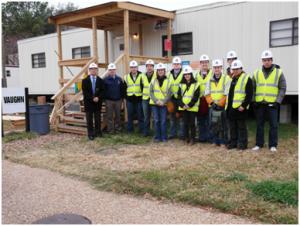 The first construction project that we toured was an expansion of the centralized cooling system for the university, which is being constructed by Vaughn Construction based in Houston, Texas.  The planning for this project was very important because the facility needed to stay operational while the new cooling towers were being installed.  Vaughn Construction is the general contractor for this project.  Vaughn wanted to reduce the schedule of the project, but the cooling towers were always on the critical path.  The way Vaughn reduced the duration of the project was to propose the idea of using temporary chillers while the project started so that they could build the first two towers at the same time.  This plan reduced the schedule by about 9 months.  The total project budget was $40 million and the contract structure was construction manager at risk.  Trent Williams, project manager for the central plant expansion, gave us a crash course in how the buyout process works with a gross maximum price.  He also covered many of the issues related to the differences in design-bid-build and construction manager at risk projects.  Williams also explained the challenges of working in a campus environment with high levels of pedestrian traffic, the intricacies of equipment rental decisions in a tight construction market, as well as how chillers work and how this affects the expansion project. 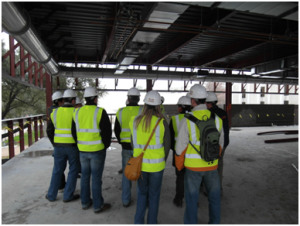 The next project we visited was the University of Houston Fleming Teaching Laboratory, which is being constructed by Hoar Construction, based in Birmingham, Alabama.  This project is a four story laboratory building including two levels of developed lab space and two levels of core&shell space for future build-out.  We were fortunate to get the opportunity to climb the scaffold and walk the floors currently under construction with John Smith, superintendent.  Presently, the structural steel is nearly topped out and metal deck and concrete floors are being installed.  Hoar has split the building in two parts horizontally in order to get MEP contractors on site quickly and speed up the project schedule.  Thus, while decking and concrete is being finished on one half of levels 3 and 4, ductwork, sprinkler piping, and electrical conduit are being placed on level 1, level 2, and half of levels 3 and 4.  One of the first questions we raised to Smith was the issue of fire-proofing on the structural steel.  He explained to us that they have asked many questions about why there was no fireproofing and the university responded that the code states this type of building does not need fireproofing.  The superintendent also spoke to us about how he manages the crews on the jobsite.  He told us that over his thirty plus years he has worked for superintendents that would attempt to very forceful and end up accomplishing very little.  He decided that when he got the chance to be a superintendent he would not be a ‘screamer!’  He was kind enough to spend several hours on site sharing of his experiences and answering questions. 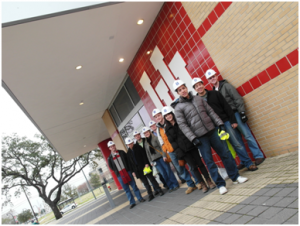 Professor Song for the University of Houston presented on two topics currently being studied at the University of Houston.  These two topics were ‘construction simulations applied to excavation’ and ‘lean construction concepts applied to concrete construction.’  Both of these topics used concepts from manufacturing and tweaked them to make it work for construction.  The first presentation covered how to use a computer simulation to find the most optimal solution for cyclical activity on a construction project.  One limitation of the study currently is that it only takes into consideration the time and cost of the activities.  The idea of lean construction fits into the topic of sustainability.  During this presentation we discussed project management strategies such as just in time delivery and how the planning of the project is vital to the success of the project.