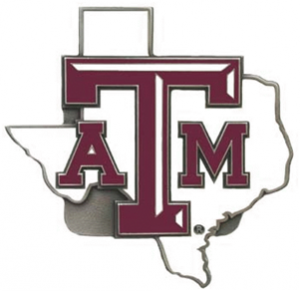 On Friday our day started at Texas A&M University with a short presentation by our host, Assistant Professor, Dr. John Walewski.   He provided information to us about the Masters and PHD programs that are offered at Texas A&M University.  A variety of degrees in a number of different disciplines are available at his institution.  However, he stressed that they are always trying to improve their programs. This emphasis was most evident with the recent addition of a Masters Degree in Engineering, a one year degree with a focus in Construction Project Management.  This degree program was developed after University officials were approached by industry professionals who had asked for a program that would better prepare students for a project Management role following graduation. 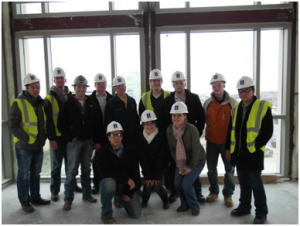 Following Dr. Walewski’s presentation, we were given a tour of the Emerging Technology&Economic Development (ETED) construction site by an Assistant Project Manager for Vaughn Construction, Ben Pierson.  Construction started in early 2009 and is set to be completed for the Fall 2011 academic semester. ETED will consist of wet and dry laboratory wings, with the dry wing also housing office space for students and faculty at Texas A&M University.  The building has a LEAN Design and is expected to obtain a LEED Silver rating, when completed.  Throughout our tour, we were given insight to many of the obstacles that had to be overcome during construction and design. One of the first obstacles encountered involved the soil content of the building site.  The site was situated on highly expansive clay. To surmount this issue, they used Cardboard Carton Forms for the foundations which would degrade as the concrete forms cured, allowing the clay to expand around the foundations after their construction.  The next issue involved the labs.  Many of the labs would be conducting highly sensitive and expensive experiments which could not tolerate any disruption in data collection; to deal with this, a battery backup power system will be added to the facility. This system would only be used if there was a power outage in the facility of 3 to 4 seconds of lag time, the amount of time needed until the backup generators become operational. 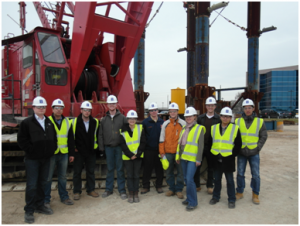 Following our time at Texas A&M University, we traveled to meet with the founder of VERSABAR, a University of Illinois Graduate, Jon Khachaturian, in his Houston Office.  Accompanied by Tom Cheatum, VERSABAR’s Sales and Marketing Manager, Mr. Khachaturian gave a presentation about the evolution of his company, which he founded in 1981. Starting with his idea to eliminate waste, Mr. Khachaturian developed a reusable spreader bar that could be used on custom rigging systems to lift massive structures. To date, he holds 44 foreign and domestic patents which keep VERSABAR on the cutting edge of heavy lifting systems industry.  Also, during his presentation, we were shown the newest lifting system in VERSABAR’s arsenal, the VB 10,000. This massive, $100 million dollar structure has the capability structures that are larger than any structure that they could have ever lifted in the past.  This new system exemplifies VERSABAR’s commitment to continuous improvement.