After a lunch in Ulsan, GLCM departed for Pohang in time for their rendezvous with Posco to tour their steel mill in Pohang. Over the course of the more than hour long pilgrimage, the GLCM clan recharged after a night of pitch perfect karaoke the previous evening in preparation for the afternoon’s events. 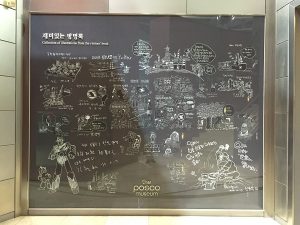 Upon our arrival in Pohang, we were welcomed by the hosts and sat down to a short presentation introducing Posco Steel. The company was founded in 1968 with its first steel mill being built in Pohang. South Korea at this time was plagued by poverty and Pohang was a small farming and fishing village with only 500 houses. Fast forward to today and Pohang has a population of 530,000 people and is home to the sixth largest steel company in the world: built on 9.5 million square meters and producing 18 million tons of steel a year. Posco went on to build another steel mill in Gwangyang in 1981 on 6.5 million square meters of land that produces 22 million tons of steel a year. Today, Posco has 17,800 employees in Korea, is a global company, and is an environmental leader in the industry: having invested 2 billion US dollars in antipollution technologies and covering 25% of their Pohang location in trees.

After the presentation, Posco took GLCM on a bus tour of their facilities in Pohang and explained the steelmaking process they employ. The raw materials needed to create steel are imported from locations all around the world and then melted down and sintered in the case of iron and coked in the case of coal. From here impurities are removed from the molten steel so as not to compromise the structural properties of the material. The steel then comes out of this first phase in one of three shapes: a slab, a bloom, or a billet.

Additionally, Posco invented their FINEX technique to produce steel. The FINEX process cuts down drastically on pollution and processing costs by allowing Posco to use fine iron ore in its natural state and skip the sintering and coking processes using fluidized bed reactors and compacted materials. 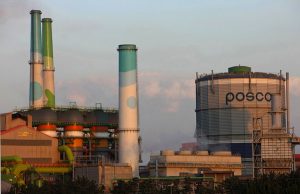 GLCM had the distinct pleasure of having the opportunity to observe the next phase of the steelmaking process. In this phase, the steel is rolled out on rollers over long distances at a temperature of 1100 degrees Celsius to thicknesses between 6 mm and 200 mm depending on the needs of the client. Water is used to cool down the steel and maintain it at the required temperature for the necessary malleability. The Pohang site uses 5.3 million tons of water each day in order to moderate the temperature of their steel! From here the steel is formed into its final shape, such as coils, wires, beams, and plates for use in satellites, cars, silverware, buildings, electrical equipment, and everything in between. Seeing the steel be rolled, cooled, and formed in person was an incredible experience. Steam filled the warehouse as water was sprayed over the molten steel, and the heat coming off of the steel could be felt even from the observation deck on the far end. GLCM enjoyed the experience so much they had to be pried away from it by the tour guide. 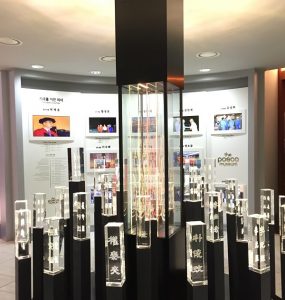 After the tour, GLCM went to the Posco history museum built in 2003. Here GLCM was treated to a tour that demonstrated the incredible odds Posco overcame to become the global power it is today. The Pohang project received scrutiny from other countries as well as the Korean media who claimed the project wouldn’t bring prosperity to the nation. Park Tae-joon was appointed to be the man the government needed to drive the steel project. He is known for having forced the reconstruction of the concrete slab for the power and blower houses on the project because portions of it were 10 centimeters too high, despite the fact that it was already more than 80% complete. Furthermore, he employed “blitzkrieg construction” which involved commandeering all the cement trucks in the country and pouring concrete around the clock for two months in order to pour 700 cubic meters of concrete a day because the project was three months behind schedule.

After thanking Posco for their hospitality, our global leaders boarded their bus and continued their adventure. This writer went on to catalogue our heroes’ quest as the rest of our adventurers unwound with plentiful games of Euchre and joyous music. Whooping and shouts declaring reneging echoed through the bus and there was much rejoicing… 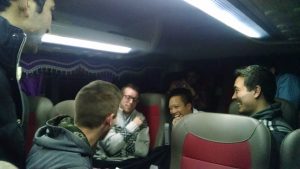