Today, GLCM visited the Hyundai Heavy Industry (HHI) offshore yard where two Exxon Mobil projects were under construction. Since the Ulsan Harbor Bridge has not been completed yet, the travel time to HHI was estimated to be one hour. The traffic was pretty bad considering that we were on the road at 7:00am. When we reached Hyundai Heavy Industries (HHI), we were greeted by Angela Song, who guided us to our safety orientation.  Exxon Mobil values safety greatly. Their motto is “Nobody Gets Hurt”. To make sure that this goal is reached, they had dedicated personnel who were in-charge of safety. The Personal Protective Equipment (PPE) was mandatory for every personnel working on the Exxon Mobil project. There are seven basic components including a safety harness, jump suit, and safety glasses. The jump suits made us feel like astronauts that were going to save the world. 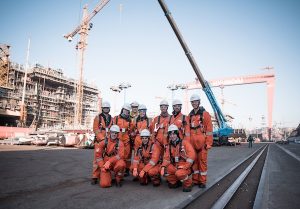 After the safety orientation, we were split into two teams and taken to either the Point Thomson or Hebron projects first. The Point Thomson project is located along the Beaufort Sea, on the North Slope of Alaska, approximately 60 miles east of Prudhoe bay. Since the project is located in the Tundra, a lot of infrastructure work had to be put in to make sure that the site is accessible during the year. The project consisted of 5 main modules that each controlled different aspects of the plant namely utility, compression, separation, power generation, and control center. All of these modules were being built by HHI and would be shipped to Alaska by June 2015. Each module will be transported in barges and tugged across the pacific to the site where they will be installed. 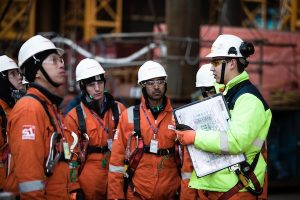 Another interesting aspect of this project was that the facility would only be producing and transporting oil. The methane gas that escapes as bi-product is processed and injected back into the ground. This is done to maintain the pressure inside the ground to facilitate the easy removal of oil and store methane underground for future expansion of the existing facility. Exxon Mobil plans on using this methane for the Alaska LNG project that aims to be the world’s largest natural gas development project. Another use of the Point Thomson project would be to initiate development on the land leased by Exxon Mobil from the Alaskan government for oil production. By producing 10,000 barrels of oil a day, the company plans to keep their dreams of future expansion alive by keeping the Alaskan government happy. 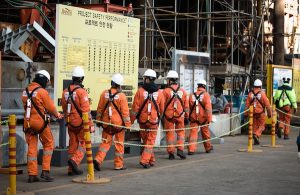 Touring the job site, we got a sense of how safety was a priority on the project. For instance, the confined spaces were strictly regulated to make sure the workers had enough air to prevent them from suffocating. Every worker had strict PPE requirements depending on the trade. Exxon Mobil followed a zero tolerance for alcohol and smoking was not permitted in the construction zone. There were weekly management safety walks every Tuesday at 2:00pm. Every management personnel involved with the project would tour the job site to observe the safety practices in place and to make sure the workers are following them. The observations were documented and poor performance was worked on over the week. Incentives like gifts and dinners were provided to workers for following safety practices. GLCM was fortunate enough to be a part of the safety walks. We gained an insight on the things that were classified as safety hazards and learned how to document them.

Following our site tour, we were taken to the main conference room where Exxon Mobil had arranged lunch for us. Overall it was a great once in a lifetime experience to be able to tour the mega project and see first hand how these structures are being constructed.