Following the morning at Favela do Cantagalo, we were hosted by Marcelo Castilho, a Civil Engineer who specializes in mining, from Carioca Engenharia at the Porto Rio project.  Porto Rio is a part of the Porto Maravilha project, which is the improvement of a degraded port area of Rio de Janiero.  Formerly the federal capital and lively port of Brazil, it is now by-passed from above by a viaduct.  This viaduct casts a shadow over historic buildings that are now a hidden relic within the deterioration.  This port is home to an immense amount of Brazilian history and culture.  But, when the port closed, many of the buildings were abandoned and have remained vacant over the years. 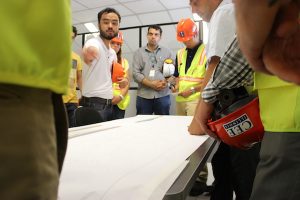 The Porto Maravilha project is geared to improve the urban system and landscape of the port.  The overall project will rejuvenate the former industrial port and will incorporate sustainable techniques.  The new port area will replace industrial warehouses and abandoned buildings with new opportunities for residential, business, and social developments, while preserving the history already instilled within the region.  After this revitalization the port will return as the city center for Rio de Janiero.

The Porto Rio project is a public-private partnership, whose work is contracted to a joint venture of three major contractors.  Marcelo gave our group the opportunity to descend into the tunnel and explore the project.  Porto Rio is responsible for three vehicular tunnels that will have varying spans from about 1.5 km to 3 km.  Two tunnels will serve as an express route from the southern portion of Rio de Janeiro to the airport, while the third is used for local access within the port.  When project is completed in December 2015, each tunnel will have 3 lanes of traffic.  This will be the first ever, major upgrade in transportation and infrastructure for the area.  The new improvements plan to include paths for pedestrians, bicycles, and even a light rail system. 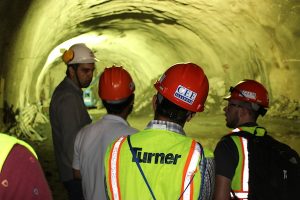 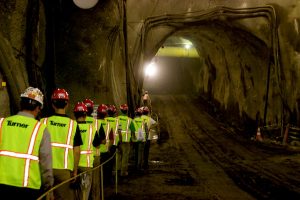 Unlike the Metro Line 5 project that we visited in São Paulo, the Porto Rio tunnels are being bored with a drill and blast method.  For each blast, 168 holes are drilled with a drill rig and packed with ammonium nitrate explosives.  In order to ensure safety, each employee must submit his identification badge upon exiting the tunnel.  The detonation does not occur until all badges are collected, indicating that the tunnels have no workers within them.  The blasts have specific times to be performed, along with set silence hours.  Despite these silent hours, workers are scheduled in three shifts in order to maintain production 24/7.

A shaft that is 20 meters in diameter and is 46 meters deep is used to access the tunnels.  At this shaft, a gantry crane is used to pull out blasted granite, rock, and soil from the tunnel.  The project is divided into two phases, where Phase 1 is primarily the tunneling and excavation.  This phase is completed by a repetition of the following procedure: Drill holes, place explosives, blast granite, excavate soil, place trusses and tie-backs, place reinforcing steel, and spray concrete. The tunnels will be fully operational for the Olympics in 2016 with plans for one tunnel to be open by the end of 2014.  These tunnels will serve as an important route to help alleviate traffic during the games. 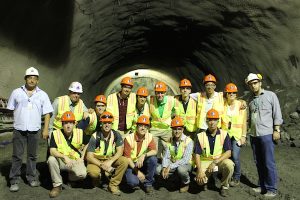