As the construction site visits are wrapping up, the GLCM crew made our last stop at the Olympic Park and Olympic Village. These two developments will soon host thousands of athletes, staff, and spectators from all around the world. In the morning, we had the unique opportunity to see the construction site which will soon host the 2016 Olympic games. Having just been to AECOM to discuss the design, GLCM received a good overview of how a massive project goes from concept to design to construction in a short amount of time. Having over 1.18 million square meters, this site will host 15 Olympic sports and 10 Paralympic sports. This large development will require a peak construction crew of 3,000 people who will be working 24 hours a day prior to hosting these games! 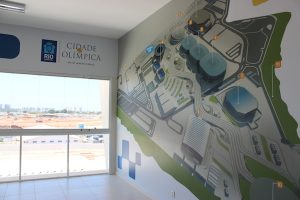 The Olympic park construction contract is broken into several complicated parts. Rio Mais, the main concession holder, has a 15 year public private partnership (PPP) with the city government of Rio de Janeiro.This contract, which will receive 1.4 million BRL, includes the construction and maintenance of the Olympic Park infrastructure. There is also a technical cooperation agreement with the Brazilian Federal government. The PPP contract includes three sport pavilions, a media press center, the international broadcasting center, a hotel and the athletes village infrastructure. On the other side, the technical cooperation includes the aquatic center, tennis center, Velodrome, and the handball arena. Each of these different venues are bid as different contracts and require a detailed logistics plan to ensure smooth cooperation among contractors. 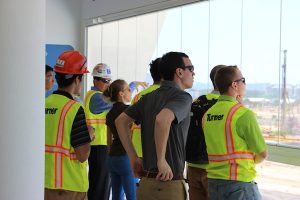 After consulting with several of the engineers and staff from Rio Mais, GLCM learned a great deal about the challenges faced when constructing large sporting infrastructure with a tight schedule. Being a little over two years away from opening ceremony, the contractors, and the rest of the city, have a lot of work to accomplish. Currently, the site earthwork is nearly complete and some of the foundations for the infrastructure have been set. There is also a good amount of progress completed on the superstructure for the media deck which can be seen below. Superstructure for the main three sporting arenas is planned to start soon in order to keep pace with the schedule.

Another challenge that the construction team faces is the environmental concerns that are faced with this development. In order to improve sustainability in Brazil, this park will be built to achieve LEED certification. To obtain this, the contractors are using several techniques including reusing 70% of the Jacarepaguá racetrack which was on the site previously. This achievement has been underway since July 2012. Following the Olympic games and the Paralympic games, this project will be transformed into another sustainable development. In past games, cities have struggled to find uses for the buildings constructed for the Olympics. In Rio, part of the structures are temporary and can be easily removed. This space will be then converted into a new neighborhood development. The permanent stadium structures will then be used as training facilities for future Olympic Games (COT).

Overall, GLCM received a good introduction to the difficulties working on such a high stakes and schedule driven project. Not only is this project very complex, it also sits on the world podium as a showcase for future Olympic Games.