After concluding our morning activities, the GLCM entourage headed off to our next stop, Ostia Antica. Lying just a few miles outside of Rome, Ostia Antica is a vast archaeological site with a storied history dating back to at least 400 BC and lasting until the fall of Rome in 476 AD. The site is composed of a port city that once lay at the mouth of the Tiber River, which gave its name to the city. “Ostia” refers to the “mouth” of the river. The city began as a military port supporting naval expeditions to extend Rome to the south towards Carthage. During this time, Ostia Antica was a working-class city of about 100,000 citizens consisting of mostly dockworkers and slaves. As Rome expanded into the Mediterranean and the river began to recede due to silting, Ostia Antica transitioned into a commercial town and vacation destination. Prominent features that have been excavated include its port, tombs, theater, forum, dining halls, roadways, warehouses, factories, and baths. Notably, more than half of the site remains unexcavated, leaving much to be explored in the future. 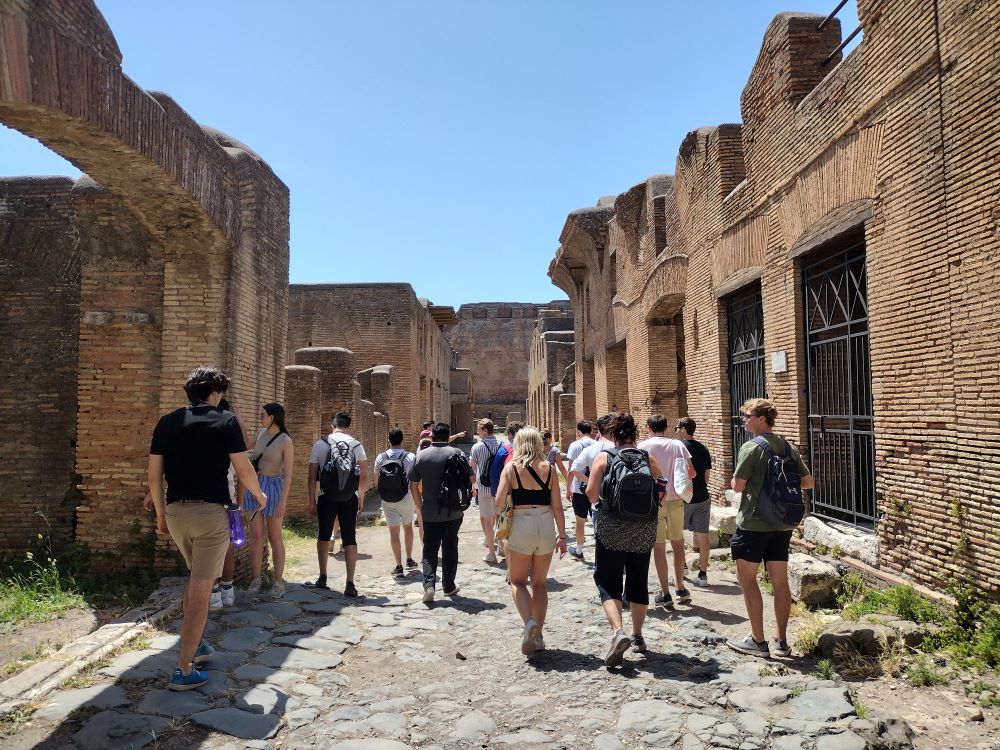 An aspect of the archaeological site that we were able to extensively tour was the baths. Ostia Antica contains both public and private baths. These baths were adorned with elaborate mosaic tiling and decorative paintings. Baths contained both cold and hot water areas, the latter of which was made possible by radiant heat through the walls and floor from fires. The public baths also contained recreational spaces for sports such as handball, where the baths would surround courts and a gymnasium. As you can see in the photo below, the public bath mosaics were adorned with deities and marine figures alluding to the theme of water. They included Neptune (god of the sea), sea horses, dolphins, tridents, shells, and the sea monster Scylla. 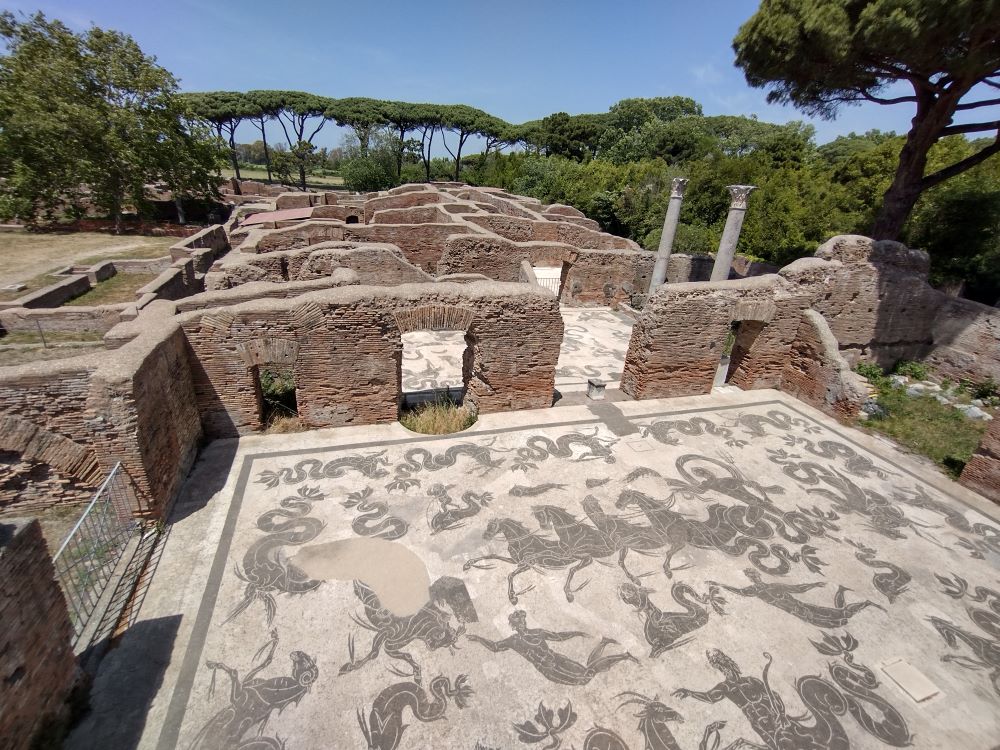 As Ostia Antica commercialized, private real estate endeavors surged in the city. Such construction included apartments with private baths used by tenants. These baths contained elaborate mosaics and paintings akin to those of the public baths. Some of these mosaics included hunting scenes and plant motifs. Paintings referenced deities, one of which highlighted the birth of Venus (goddess of love) from the sea. One of these private baths featured a domed ceiling with encircling archways and an illustrious mosaic floor, as seen below. 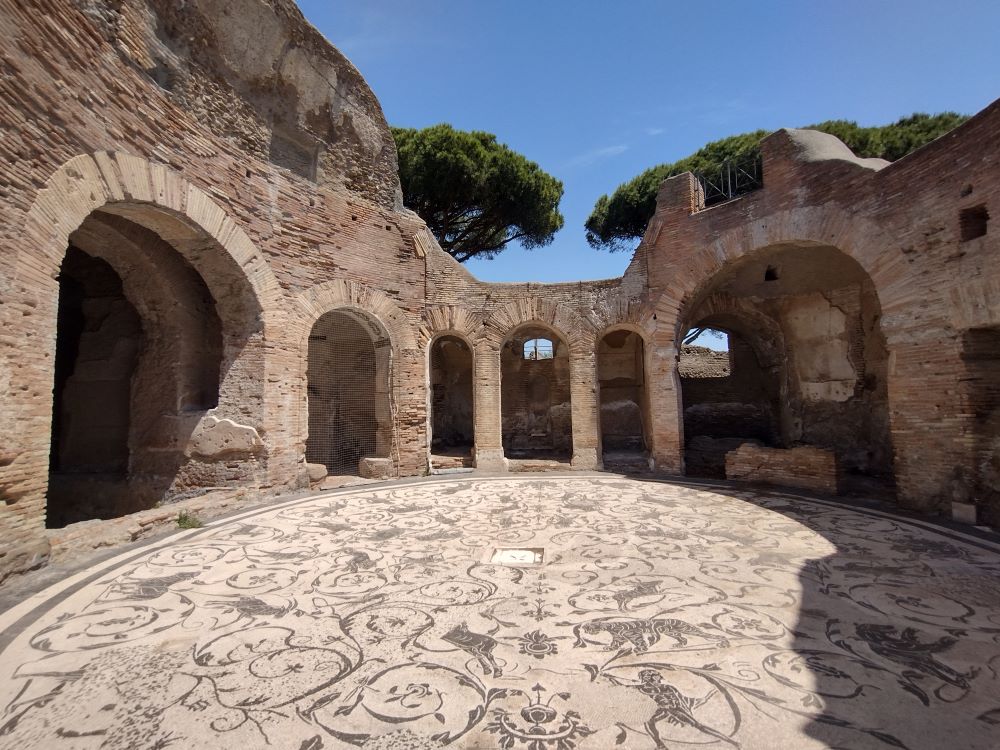 Another notable feature we explored was the outdoor theater, which has an interesting connection to Benito Mussolini. The 1942 World’s Fair was planned to be held in Italy; however, it was cancelled due to World War II. Before this cancellation, Mussolini sought to showcase Italy as a global model for fascism and to embellish the nation’s features. He restored many archaeological sites, including Ostia Antica. We owe the current condition of the site today to these efforts; however, this has made it more difficult to ascertain the original and restored features. The outdoor theater, pictured below, housed shows of comedy and tragedy for the public to enjoy. 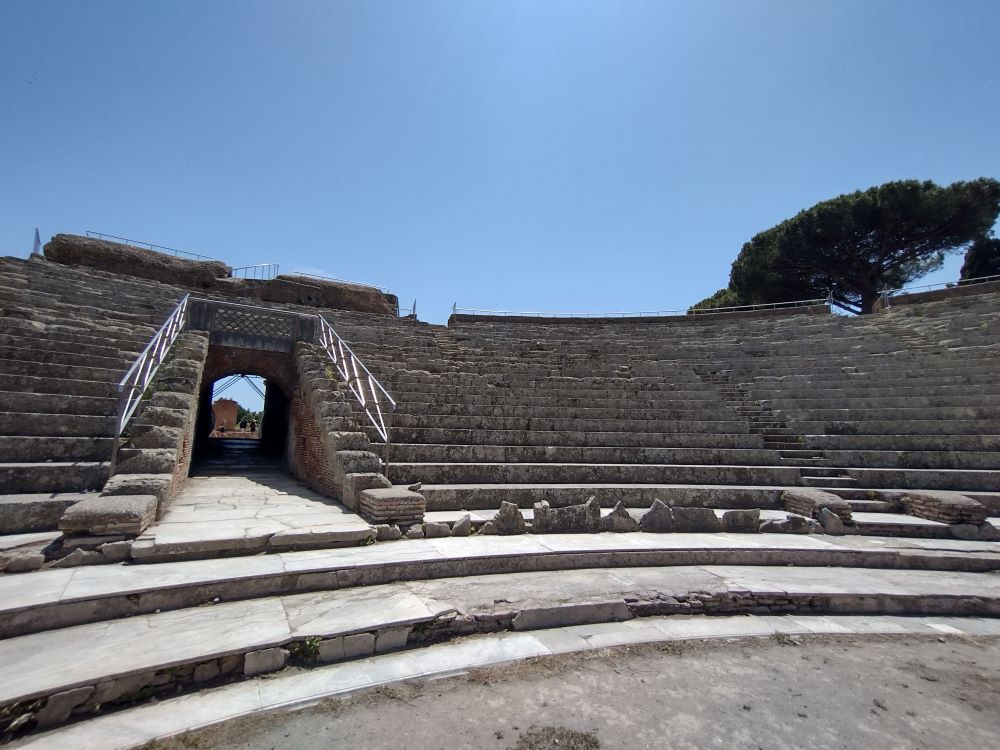 The site also includes several monuments with iconography relevant to the city. One such monument was a statue of Ceres, the Roman goddess of agriculture. Ceres was significant to the town because of her association with grain crops, which were an important import of the town, where factories were dedicated to grain products. Another notable monument was dedicated to the god Mithras, who slaughtered a bull. Mithras cult worshippers would hold rituals in his honor in underground tunnels and temples throughout the city, where they would eat meat, which represented the slaughtered bull, and drink wine, which represented the blood of the bull. We toured one of these underground halls, where we admired the monument to Mithras. 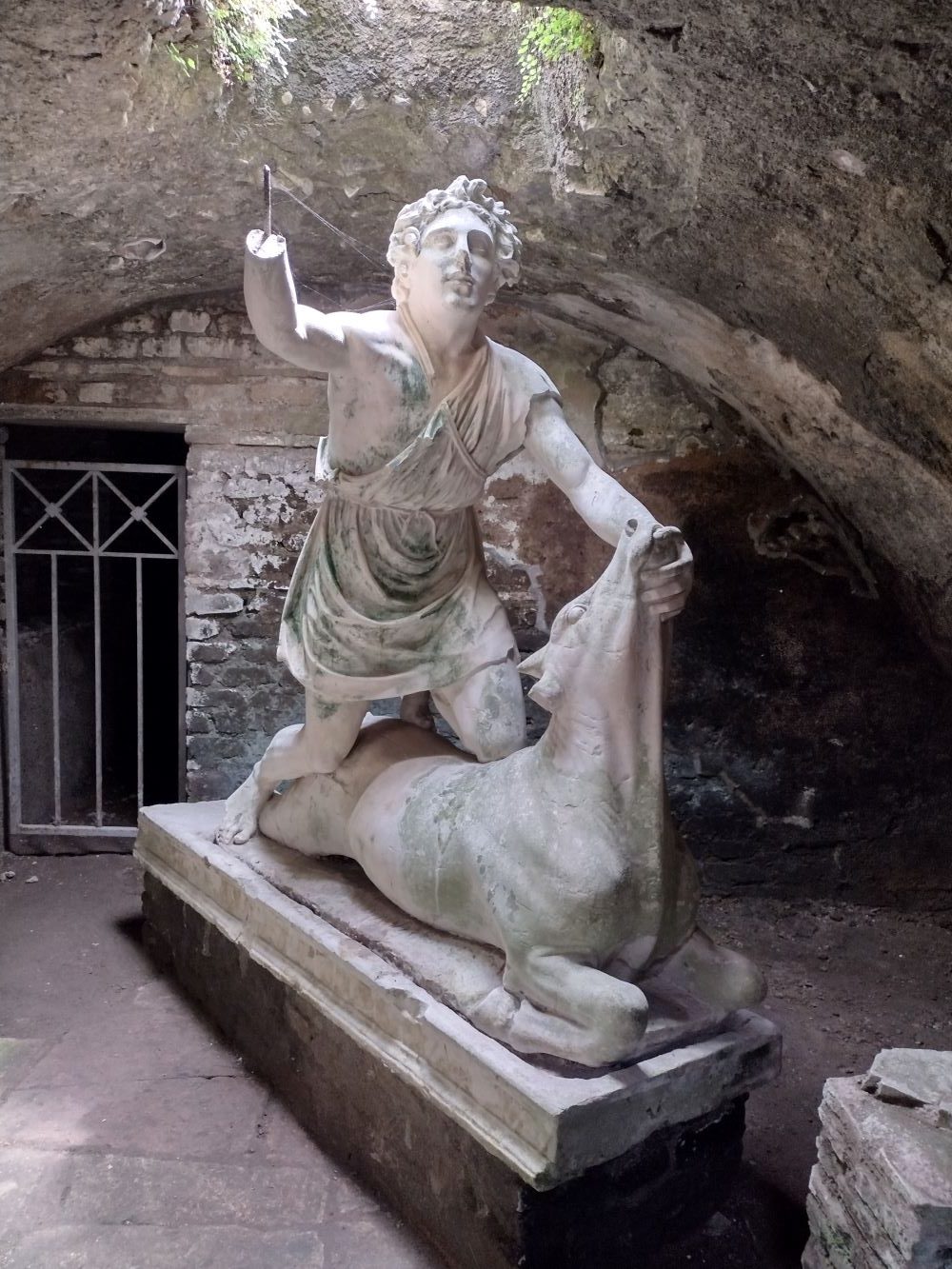 Ostia Antica was a neat opportunity to walk through an ancient city and was an excellent closure to the historical visits of our Italy trip. We had a wonderful time touring it and learned a great deal from our guide, Dr. Tom Rankin. After our tour, we took the train to relax at a nearby beach and reflect on our memorable travels.