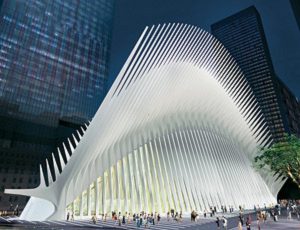 After enjoying a delightful lunch split between a Burger King with a serving staff and a McDonald’s with a baby grand piano player, The Global Leaders in Construction Management continued activities on the World Trade Center site with an afternoon tour of the Oculus Transportation Hub.  The new hub, designed by Santiago Calatrava and estimated at $4.1 billion will be a major junction of subway trains running throughout New York and New Jersey when completed. 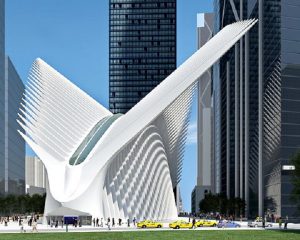 The project has presented many challenges in addition to the already complicated construction background on the World Trade Center site.  In order to minimize project costs, the Port Authority of New York and New Jersey have implemented a contracting scheme wherein individual parts of the project are awarded separately.  Key contractors on site so far include Turner Construction and Tishman Construction who are working as a joint venture of combined expertise.  Also complicating the mega construction project, The Port Authority of New York and New Jersey has mandated that the existing subway lines remain operational for the duration of the project.  To overcome this challenge, Turner and Tishman have implemented a unique system to support the existing subway lines with mini piles and bracing while installing new infrastructure below the grade of the subway tracks.  Other challenges include extremely small lay down areas, tightly scheduled windows for construction activities, and logistics.  So far the all-star team of construction experts has overcome the many challenges of constructing a world-class transportation hub in the heart of Downtown New York. 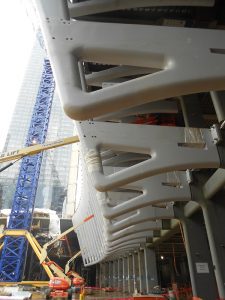 The structure of the Oculus transportation hub is unique to the New York subway system with construction demanding a state-of-the-art delivery.  First, the project is a focal point of architectural design.  Architect Santiago Calatrava has incorporated over 55,000 tons of steel and other materials from around the world in order to craft a distinctive mixed-use station.  The construction of the high-profile project has included many design changes and clarifications, but the construction team has maintained positive relations with Calatrava in order to successfully deliver the project.  Second, to close the gap between design and construction, the project team implemented Building Information Modeling (BIM) techniques of coordination.  At a cost of $40,000 BIM modeling was not an inexpensive choice for the Port Authority of New York and New Jersey, but the additional coordination has skirted many on-site building conflicts that could have drastically increased the project cost.  By utilizing extensive planning and coordination activities, the construction team is on a promising route to finish the transportation hub. 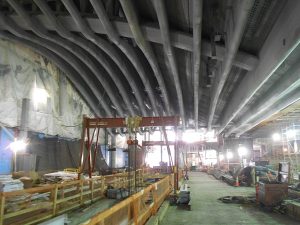 The Oculus Transportation hub is a landmark project in the heart of Ney York’s financial district.  The Turner and Tishman construction team have bonded together solve the challenges of constructing a world-class hub without interrupting the highly demanded necessity of having an operational subway system.  With the great deal of planning undertaken, at the end of 2013 the first subway platform will come online to service the vast populations of New York City.