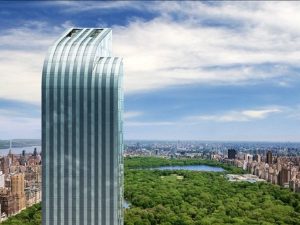 This morning we had the pleasure of joining Nick Grecco, a Senior Vice President at Lend Lease, for a tour of One57 in Midtown Manhattan.  When completed, One57 will be the tallest (1000+ feet) residential building in New York.  This residential tower includes a Park Hyatt Hotel and 132 condo residences with luxury finishes and amenities such as a spa, sauna, and pool.  Extell Development is Lend Lease’s client for the project and has chosen to develop this residential tower on a prime location in upper Midtown on the edge of Central Park. 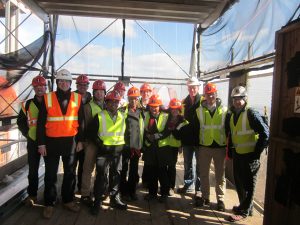 The project received national attention when the construction crane for the project partially collapsed in the winds of Hurricane Sandy. Mr. Grecco was not hesitant to discuss the circumstances surrounding the crane collapse.  The crane was subjected to winds in excess of 80 miles per hour that shifted directions rapidly.  Investigations into the cause of the accident has shown that proper procedures were followed prior to the hurricane and that there was no negligence by any party.  The building had already topped out prior to the hurricane, so there were no major structural delays, however the installation of final mechanical equipment and curtain-wall components have been delayed as the entire city continues to recover from the effects of the storm.  The damaged boom of the crane is in the process of being disassembled and lowered to the ground. Because it requires the use of a temporary derrick system it is a slow process, lowering about two pieces a day. 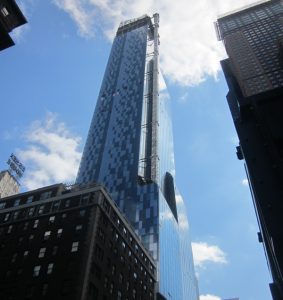 We were fortunate enough to begin our site tour at the top rentable unit, which has been reported to be valued at approximately $90 million.  The view of midtown Manhattan and central park was certainly worth the brisk winds we faced on the 72nd floor.  Mr. Grecco shared with us strategies for managing large, extended timeline projects.  He stressed the importance of maintaining project team morale while focusing on global project goals.  Our discussion with Mr. Grecco captured a broad range of construction management topics in a clear and insightful fashion and we sincerely appreciate his willingness to share his time and expertise.