Eleven years ago, our nation was hit with the worst terrorist attack ever. The aftermath crippled this nation. Many wondered whether we would ever come back, whether we could rebuild. Today, the Global Leaders got to see one of the most complex and inspirational projects in the world conquer that doubt. Standing on top of a 20 floor podium sits the new iconic One World Trade Center. As we stepped on to the site, with Jeff Holmes of Tishman, we instantly felt a patriotic vibe. Every worker donned American Flags with the One World Trade Center logo. Stickers, flags, and signs with “Never Forget” were posted everywhere. Even the morale on site proved that this project was proving a point, America can rebuild. 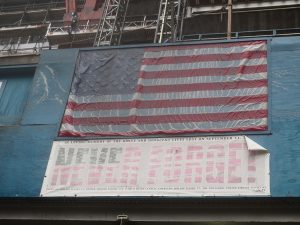 As we began our tour, Jeff explained the challenges with this complex and overdesigned project. One of the main components was the heavily reinforced shear wall in the center.  Composed of 14,000 psi concrete, the two segmented shear walls measured 70 inches thick at the peak, and were linked by a steel joining member. Ironically, this project contains more steel reinforcing than steel framing, which is not typical for buildings. Even though some of the larger steel members, which were imported from Luxemburg, weighed 2500 lbs/linear-ft. These massive steel members, located at the base of the building, were W14x730’s with 6 inch thick steel stiffeners welded to the sides. Massive! Lastly, Freedom Tower stands at 1776 feet tall with the spire. This number, which also represents the signing of the Declaration of Independence, is just another symbol of American pride.

With these overdesigned members and high strength concrete came some interesting security measures. The building contains two emergency exit stair cases which are twice the size of code standards. These staircases are also pressurized and include separate life safety and filtration systems. Most of the glass is designed to be blast protected. In such an event, the glass will act like a trampoline, absorbing the energy and causing the glass to drop straight down rather than projecting outward. There are also several blast proof areas on site and the project is strictly monitored by the Port Authority Police. 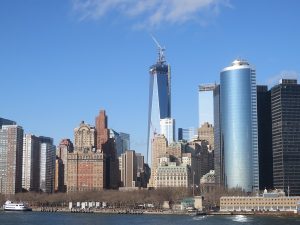 Unfortunately, with the recent hurricane, the basement floor flooded with over 15 million gallons of water creating a water line 13 feet above the basement floor. Luckily, no structural damage was present. However, some of the mechanical components were destroyed and needed to be replaced. Overall, this interesting, inspirational, and complex project gave the Global Leaders great insight as to how a large and multi-entity project is constructed. 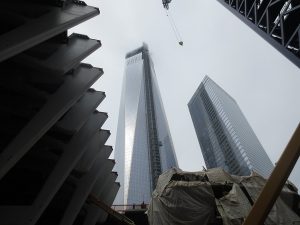