Our final New York destination was Forest City Ratner’s Barclays Center.  We met up with Sherveen, one of the responsible project managers from Forest City, and Jamie, one of the operations managers from AEG.  After a brief introduction to the project we had the opportunity to see some of the underground operations areas.  One unique feature of the arena is an amazing truck elevator and turntable.  The system allows full size semi-trucks, up to 90,000 lbs, to drive forward into the arena at street level, descend to an underground loading dock area and spin around to unload.  After unloading, trucks are able to spin back around, ride the elevator, and drive forward out of the building and onto the street.  Athletes are even able to utilize this system during their games. Because of the roaring tigers and circus setup we were unable to closely inspect the elevator.

We then explored the main concourse and discussed some of the aesthetic characteristics of the building, and its integration with the neighborhood.  The arena has approximately six different shops along its perimeter with access from within the arena as well as from the street.  The street level shops invite the community towards the arena.  From the outside, the weathered Cor-Ten steel shell highlights the rough nature of brownstone Brooklyn but the amount of exterior glazing creates a warm feeling.  The finishes of the arena are different than most NBA facilities.  The interior of the building has a subdued but sharp feel to it.  Dark terrazzo, black and grey paint and silver signage finishes complete the building, while custom lighting fixtures accentuate the building.  The front entrance of the building yields peaks of the main scoreboard while advertising the game.  One of the primary reasons for the high end finishes and inviting nature of the building is the importance of enhancing the neighborhood as a community member.  With over 200 events a year, this arena will help revitalize the area. 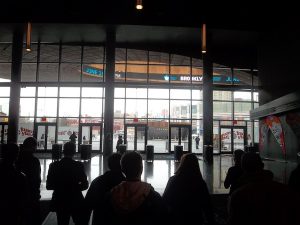 The expertise of many Forest City employees was critical to the success of the construction project.  The front entrance oculus is essentially cantilevered out, and because of its mass deflection was a primary concern.  To solve this issue the construction team had to make sure it was built exactly to the specifications.  One of the most challenging aspects of the construction was the arena roof.  The roof consisted of two primary T1 trusses and many secondary trusses.  The T1 trusses had to be built with temporary shoring until the truss spanned the entire length.  Once the trusses were complete the project team slowly removed the shoring and excitedly finished the roof.

One important note that our guide made was in regards to the architectural team, but it applies to most people.  The note was that you should always know what you don’t know, and then go out and learn it! 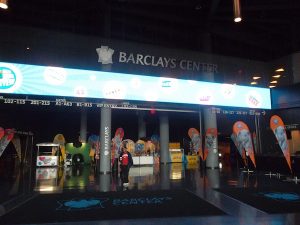 The project incorporated many different aspects. The bowl of the arena was made primarily for basketball.  This was important because of the different sightlines and angles required within the arena. Even though it was designed for basketball, the arena will be a hockey venue as well.  No seat in the house is bad, from the owner loges to the upper deck seats.Overall, this Forest City project is a huge success!  The magnificent building is a beautiful home to the Brooklyn Nets, and a great addition to the neighborhood. 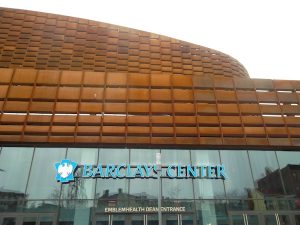