On our last day in New York City, we met with Joe Rechichi, a Senior Vice President of Forest City Ratner which is the developing company that owns, operates and maintains 8 Spruce Street, also known as New York by Gehry. As the name describes, this skyscraper was designed by Pritzker Prize winning architect Frank Gehry, who is often labeled as the most important architect of our age. Other Frank Gehry designs include the Guggenheim Museum in Bilbao, Spain, the Walt Disney Concert Hall in Los Angeles, California, and a little bit closer to home: the Jay Pritzker Pavilion and the BP Pedestrian Bridge in Millennium Park, Chicago. 8 Spruce Street is Gehry’s first design for New York City. 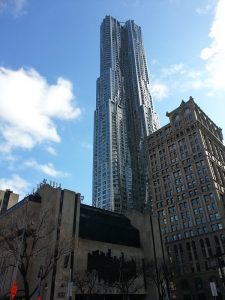 The building is an entirely concrete structure with an intricate stainless steel curtain wall enclosure which gives it its distinct appearance. Typical to the Frank Gehry signature aesthetic, the building looks different from every angle. In fact, the structure has 8 sides but only the south side has a completely straight facade. This intricate design took many design development iterations to perfect. We noticed several concept models displayed in the Forest City Ratner leasing office, however Mr. Rechichi revealed that over 60 of these massing models were presented to the developer before the design was finalized. 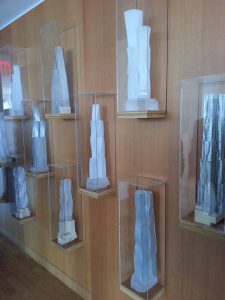 In 2005, Forest City Ratner, purchased a one-acre parking lot for $1.1 million. Construction of 8 Spruce Street broke ground on the site in late 2006 and was completed in early 2011. The building has been fully operational for slightly over a year and is now approximately 95% rented. 8 Spruce Street is 76 stories tall with 67 stories of residential rental units, 3 stories of amenities for the tenants, and a 6 story podium which houses a New York City public school. The residential portion of the building contains 900 high-end rental units ranging in price from $3,200 to $60,000 per month. 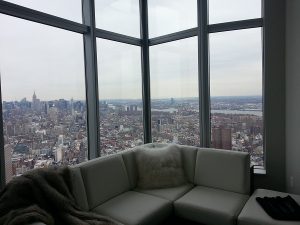 We were able to tour all three amenities floors, one three bedroom rental unit, two of the three penthouses, and the roof of the building. At every stop we were greeted by breathtaking views of the city. Throughout the tour Mr. Rechichi shared an abundance of information with us and was really insightful about the role of the developer throughout the life cycle of a project. Like us, Mr. Rechichi has an engineering background so it was really exciting that he opened our eyes to yet another career path opportunity for our futures in the construction industry.