The GLCM team had the great opportunity to take a day trip to Dekalb, IL to visit a Data Center project managed by Mortenson Construction. We were led by several GLCM alumni who work on the project including Rachel Montavon (Assistant Superintendent), Pat Klein (Project Manager), Rene Velasco (Assistant Project Manager) and Adriana Campa (Project Engineer). The massive, once in a lifetime project will be home to a popular social media company’s primary Chicago area data center. It is one of several data center campuses being constructed around the US and broke ground on 6/15/2020. 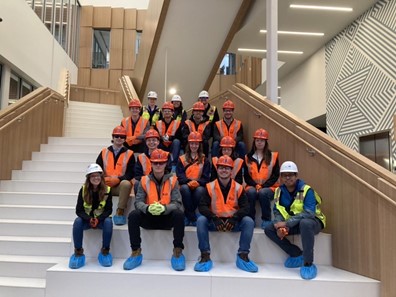 The project is extremely unique thanks to its unprecedented size. It sits on a 9-acre site that will eventually house about 1 million square feet of server and admin space. Mortenson is in the process of constructing five server buildings. Each pair of data center buildings is connected through a central admin station. The length of each data center is approximate 1 mile long and are built with a steel superstructure and a tilt-up concrete envelope. The server buildings have two floors with the first floors housing the servers and the second housing the massive cooling systems that are required to keep the servers running. These cooling systems use 6.7 gallons of water per second.

The project’s unprecedented size presents several challenges. Firstly, it requires a huge amount of manpower with nearly 1000 people on site every day. To satisfy this massive demand of labor, the site uses a combination of local union workers and as well as national workers depending on the scope. In total, Mortenson has 35 subcontractors currently working on the first two server buildings. The project size has resulted in a massive budget with an operating cost of about one million dollars a day.

It was an incredible opportunity to see such a unique project and we would like to thank the Mortenson team for welcoming us and taking the time to show us the great work they are doing at Dekalb!