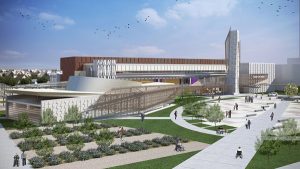 Our day started off bright and early to head to McCarthy’s Rancho Los amigos project. Of course, our car arrived first, and was rightfully named Car Number 1. Olivia and I were especially excited after each spending a summer with McCarthy. 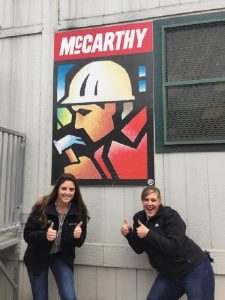 We were brought back into the McCarthy trailer where they had a host of people (and bagels!) waiting to meet us. Rashad Morton, who unfortunately is a Northwestern fan and grad, started off by introducing us to the rest of the team and project. We’re we joined by Jim (VP), Max (Sr PE), Nick (PE), Tyler (Sr PM), Jermaine (APM), Allison (Project Admin), and John. By the end of the meeting everyone was cracking jokes like we were old friends. 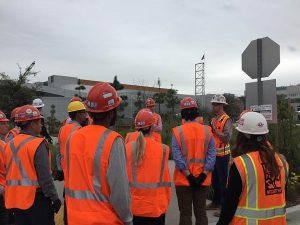 Rancho Los Amigos is a national rehabilitation group. They work with individuals who have been through major traumatic injuries and accidents. The existing campus was outdated and becoming obsolete, and McCarthy is working on phase one of the entire campus modernization and renovation. Their scope includes a new warehouse, parking deck expansion, new wellness center, and hospital expansion and renovation. These separate projects had some overlap, but didn’t occur entirely simultaneously. That said, everyone has a role in each project, including the subcontractors. This organization requires a little extra consideration, but has worked well so far. It does help that most of the main project stakeholders have site trailers next to each other. Problems and questions can get resolved much quicker than on a typical site because people can just swing by each other’s offices and ask questions.

Another interesting project detail was the doctors’ input. Because the project is a design build delivery system, focus groups of doctors and nurses were used to help guide the final design. Doctors had the chance to give input regarding the set up of everything from air flow in operating rooms to lines of sight from nurses’ stations. While not all of their input was incorporated into the design due to cost and feasibility, the meetings surely helped design an excellent facility for doctors and patients.

Working on a functioning rehabilitation center means that McCarthy has special requirements they need to fulfill. The biggest of these is keeping the entire public campus handicap accessible throughout construction. When they close roads or sidewalks, they have to make sure that there is still an accessible path for patients to use. Luckily, the architect has experience working with VA sites with similar requirements and has been able to ensure the facility is always accessible. 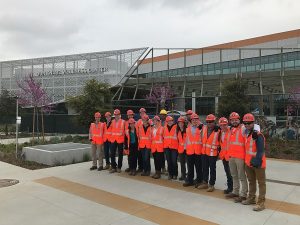 McCarthy used a robotic total station to do the surveying for the project. This method isn’t the instudry-wide standard. Typically survey points will all be relative to each other and a model will be built and oriented in space. Using the robotic total station meant that the building was oriented using actual earth coordinates. In essence it reverses the process. This was helpful throughout construction because there were a number of existing utilities on site which were difficult to locate accurately. In one instance, they found a chilled water main that wasn’t properly marked in the survey, right where footings were supposed to be installed. Instead of relocating the main, they decided that the best course of action would be to move the entire building. In all, it was moved seven feet and rotated two degrees. This adjustment wouldn’t have been possible and would’ve been much more costly had McCarthy been using different technology. 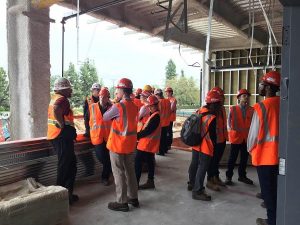 During our site tour, our conversations naturally spilt into smaller groups as we made our way around the site. We learned that the sequencing went from the second floor to the third and back down to the first. We got to see an interesting mix of construction phases- from painted walls to areas that still weren’t enclosed from the outdoors. I thought it was pretty neat to get to stand in the future operating rooms before they were filled with equipment and made to look pristine. 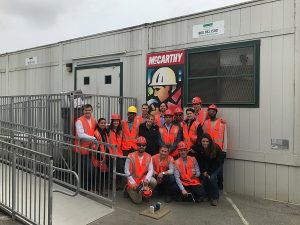 We eventually made our way back to the office to say our goodbyes and hit the road for lunch and our second visit of the day. As usual, McCarthy didn’t disappoint. We all learned a lot and had a great time getting to speak with everyone. Can’t wait for the next McCarthy site visit! 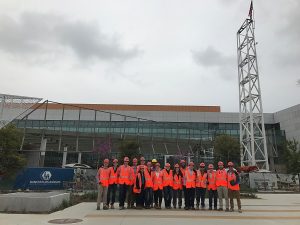