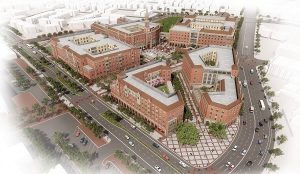 USC Village is a mixed-use student housing project north of the USC campus. It has a little over 2500 units and will have a Trader Joe’s as well. Hathaway Dinwiddie was kind enough to host us and give us a tour of the site. Hathaway Dinwiddie has over 100 years of experience and they are headquartered in San Francisco. The project itself is close to being completed and we even saw some of the finished suites. Seeing the rooms, and not to mention the weather, had some of us questioning our college choice. Jokes aside, the project itself was gorgeous even during construction. One of the coolest things we saw was the dining hall. It was inspired by the Great Hall from Harry Potter and I definitely felt like a wizard when I walked into the place. 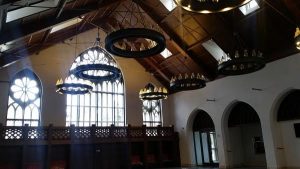 For context, the school is trying to move away from being known as a commuter school and these dorm suites are a testament to that. USC Village is a project around $700-$800 million. It was split into two phases. The first phase includes the construction of 6 buildings. The second phase includes the construction of 3 more. Hathaway Dinwiddie is in charge of the first phase and the university is using this project as a way to gauge them. Depending on the outcome the school is likely to give them the second phase, as well. And from what we saw it was going excellent. 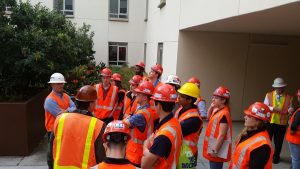 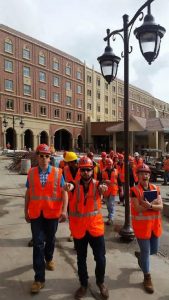 One of the unique challenges that Hathaway Dinwiddie faced as that they used only one source for their prefabricated panel walls. The challenge was that by only having one source, they stood to lose a lot of time if the supplier couldn’t produce enough walls or even if they go bankrupt as well. These panel walls were used everywhere on the project and they actually saved a lot of time by going the prefabricated route. Hathaway Dinwiddie told us that they saved around a year on the schedule by doing this. This was an example of LEAN construction. To put it simply, LEAN construction is efficient construction. Another example of this is that the almost all of the major parties involved are co-located on site. This allows for effective and fast communication between everyone. 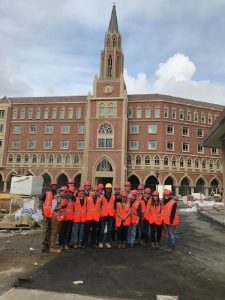 At the end of the tour we walked over to the USC campus for lunch and to take a quick tour of their campus. We were all amazed by the school and how beautiful it was. When I asked a student if it was always like this and they said “24/7.”