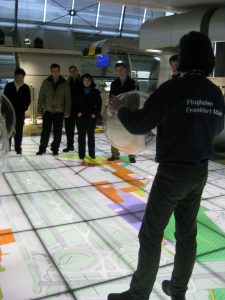 Today, our group visited the Frankfurt Airport expansion project. The airport is the second busiest airport in all of Europe and has a strategic geographic position that has the ability to connect travelers to the autobahn and regional high-speed rail. Owned and operated by the private company – Fraport, the Frankfurt Airport visit gave us important insight and a unique experience in getting to know the operation of a major international airport and the industry in general. The tour lasted the entire day, and gave us all-access to both the expansion project and existing runways. Fraport is expanding their airport to ensure that it remains at the forefront of European air travel. The expansion is divided into two major parts that are currently under construction: (1) an additional wing to Terminal 1 called “A+” and (2) a new landing runway to the southeast of the original airport. As a group, we were treated to a great series of presentations which included an overview of the airport’s development and the highlights of the expansion project. During the tour, we were also able to walk through the site of the “A+” wing, took a site visit of the runway and tunnel project, and took a driving tour around the taxiways of the actual airfield where we were able to witness airplanes take off and land right overhead. The tour was a lot of fun for us, and provided us a unique learning experience where we were able to learn a plethora of information about the operations of an airport. There are a few things that we took away with us in this project other than the fun and excitement of visiting the project site first hand. Firstly, it is intriguing to understand more about the trends in the airport industry as well as the perspective of the construction in the eyes of the owners (Fraport). For instance, we get to know how airport makes money today mostly by selling merchandise in duty free shops rather than having planes take off and land. Since the first step to satisfying clients is to know what they are looking for, this deeper understanding definitely plays a part into helping us to becoming better project engineers when we are working on airport projects in the future. Apart from that, we also learned some general facts of the airport industry. For example, the security areas are divided up into departing vs. arriving, upper deck vs. lower deck and Schengen vs. non-Schengen. Such background knowledge would help us get quickly up to speed when we encounter such projects in the future. Other than knowing more about the perspectives from the point of view of an owner and about general facts in the airport industry, we also get to know about the social challenges that the construction of a new airport faces. During the discussion, we get to talk about how the owner has learned the lessons from the resistance faced from the construction of the West (Third) runway. It is interesting to see how they tried to make sure the legal aspects right in the first 3-4 years prior to construction and do consultation to make sure people are fine with the construction of the new runway. These would add insight to planning similar types of project where potential community resistance is likely and how we as future project engineers can prevent those situations from occurring. 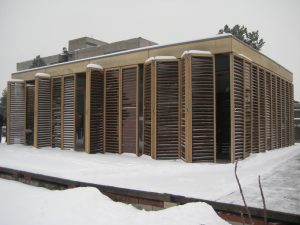 On this snowy Tuesday morning, we took a train ride out to a town about 25 minutes south of Frankfurt. It was a quaint little town with the main campus of Darmstadt Technical University located near its center. Our German friend Tomas quickly showed us around town before leading us into Darmstadt University for a presentation by Michelle Cunningham, the senior manager for the Office of International Relations and External Affairs. There we learned about the mission of the university and its fundamentals. It is Germany’s first autonomous university, thus it is a public university where students do not pay tuition; however, the university receives funding not only from the state of Hess but also from external funding. This allows the university to own its own property and chose its own staff. Darmstadt also holds many international ties and greatly encourages its students to study abroad, as well as accepting students from other parts of Germany and around the world. It is made up of 13 departments, mainly having a technical focus. We initially came into the city campus and then took a bus to the satellite campus which was about 10 minutes away. This campus houses the technical majors such as the various disciplines of engineering and architecture. Here were visited the winning house of the 2007 solar decathlon.  It is an 800 square foot house which was designed and constructed by the students of the university over a period of 18 months and cost approximately 1.2 million euro. The exterior has wooden shuttering coated in the thin technology of solar paneling, along with solar panel on a flat roof. The house is insulated with quadruple glazed windows and a double layer of extremely effective vacuum sealed, microsphere, foil wrapped insulation. As heat transfer and temperature regulation are a priority, in addition to efficient insulation, the gypsum wall board contains hallows which are filled with special paraffin.  The paraffin is set to absorb energy and change phases from solid to liquid at a pre-determined temperature in order to regulate overall ambient temperature within the decathlon house.  We were also shown all the many features of the fully functional kitchen and bathroom, the solar energy receiving and distribution center, and the self-monitoring computer which regulated the house’s efficiency and power use, before we had lunch at the university’s canteen. After a short break back at our hostel and some tea to take the chill of the German winter out of our bones, we departed to visit Deutsche Bank’s new headquarters. 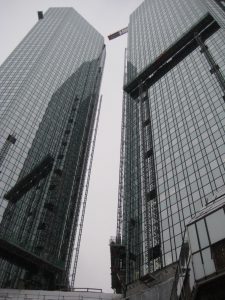 The project is a renovation and addition of the old bank’s headquarters, originally constructed in 1984, with a new focus on sustainability and green technology, thus receiving the nickname of ‘The Green Towers’.  When finished not only will this project be the largest bank branch in Europe, but will be the first high rise renovation to receive LEED platinum accreditation as well as a gold ranking in the BREEAM, the European Union’s equivalent of sustainability accreditation.  The project will have a zero carbon footprint by 2013 utilizing technologies of heating cooling cogeneration, grey water reuse, increased lighting efficiencies and HVAC optimization, amongst many other things which truly set it apart from other buildings of its type. The existing structure was striped to its concrete core to accommodate a complete fit out utilizing the most current technologies. The previous concrete wall covered with a glass curtain wall was removed and covered with altering operable windows having the ability to withstand winds up to 110 mph. After a presentation by one of the project managers and owner’s rep which was held within the old bank vault, we were escorted to the newly reconstructed lobby of the building. The existing concrete ceiling was removed and replaced with a glass dome and two sky walkways connecting the two towers at the second and fourth floors. We were then taken up to the eighth floor which was a testing mock-up of the possible interior furnishings where different lighting, seating, and work space options where installed and tested for viability.  The Deutsche Bank is unique in that it funded the creation of the products it required to satisfy its needs; such as new soundproofing, IT integration points, curtain wall windows that could open, and many other energy reduction techniques.  Our tour ended with a return visit to the vault, where we were further explained that both towers where initially constructed on sand foundations and due to differential settlement, both towers are placed on hydraulic jacks during initial construction.  These jacks can be adjusted to offset settlement to ensure that both towers maintain equal height.  The overall experience was enlightening and the new Green Towers will create footprints in renovation and sustainability which other existing high-rises only hope they can follow. 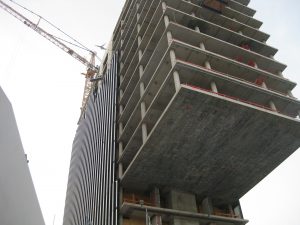 This is an exceptionally early day for us because there is a lot of travelling to be done. We travelled 7:30 in the morning from Frankfurt to Dusseldorf and arrived at the project site at the hafenspitze of Dusseldorf at 9:00, followed by a presentation by Nikolas Lupsen, who was in charge of the planning and scheduling of the project.This project involves construction on partially reclaimed land which required 100ft deep sheet piling to prevent flooding. This sheet piling was put in place from the river from a barge.  Having sheet piling this deep created another problem due to its close proximity to the river.  If the water level in the river exceeded a certain level it would create an uplift pressure on the building and make it unstable.  This required the construction team to leave two windows that would allow them to flood the jobsite if this occurred.  Another aspect of the job that we found interesting is the lack of any laydown or storage areas.  Due to the expense of storing materials on a barge, the project team was forced to use just in time deliveries with materials often not being delivered more than 4 days before they were installed.  The finals interesting feature of the job was the massive cantilever that was used on both projects.  The purpose of the cantilever was to minimize the footprint of the buildings while creating a pleasing aesthetic feature.

InHaus2 and a Presentation by HOCHTIEF AG 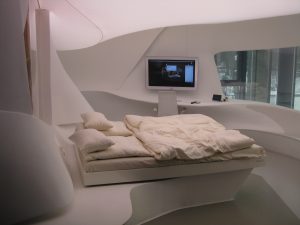 The second site that we visited was the Inhaus2 project in Duisburg.  Inhaus2 is a research center to look at future commercial sites including hospitals, hotels, and office buildings, while Inhaus1 is being used to study future residential sites.  We were shown future technologies including automated mirrors used to help elderly people as well as people that may have dementia.  This mirror has electronic screens and sensors that remind people to wash their hands, take their pills, and brush their teeth.  The mirror also includes everyday features including raising and lowering the toilet and sink automatically, playing music, and showing the weather for the day.  In the bedroom exhibition there were features including automated nightlights that illuminated the path to the bathroom and lighting that changes to reflect the different periods of the day.  The bed in the room automatically recorded the persons heart rate and their sleeping patterns.  The future hotel room exhibition included many advanced features including an automatic swinging bed, automatic dimming lights, several voice controlled activities, and automated robotic room service. Finally, we were shown a modular hotel design concept where room configurations could be changed from a single bed configuration to a large family sized configuration by easily moving wall panels and concealing them in between the walls.  These projects are funded by both external companies that are collaborating with Inhaus as well as by federal grants from the German Government. After our tour of Inhaus2 Dr. Michael Hirschfeld talked to use about the Hochtief company structure which includes Hochtief Construction, Turner Construction, and Flatiron among several others from around the world.  While Hochtief is a German company Dr. Hirschfeld told us that 85% of their work is done outside of Germany.  The company generates in excess of $3Billion per year, employ over 60,000 workers, and they currently have the largest backlog in company history. To conclude the day we took a 4 hour train journey from Dusseldorf to Hamburg where we will spend the last couple days of our trip.