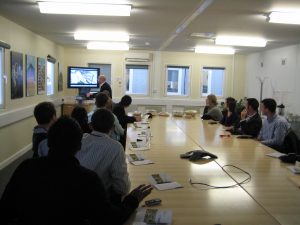 Today we went to the Olympic Athletes Village which is located in the city of Stratford in East London. The project was originally called the “Stratford City Master Plan.” Stratford is known as a poor and diverse community, and a goal of the Olympic Village is to leave a set of legacy buildings to bring up the prestige of the area and make it more appealing to residents. Bovis Lend Lease is the construction manager for the project, and they work closely with the government, the Olympic Development Association and London Organizing Committee for the Olympic Games. The first phase costs £1.1B and this is for the construction done before the Olympic Games and represents 30% of the total construction. We found it interesting that an archaeological dig was done on the site prior to the groundbreaking for construction.  A big part of their planning process focused on integrated project delivery with the construction manager, architect, general contractor and owner. One way that they do this is by having the construction managers spend their first few hours on site talking to the contractors and laborers. Security is a key part to the success of the project. During construction, all materials and trucks entering the site are checked for explosives and other dangerous substances. Once construction nears completion, each of the 4000 workers will have to scan their eyes and thumbs for entrance to the site. The scheduled project completion is end of 2011, and the keys will be handed to the ODA May 2012. Between October 2012 and December 2013, the buildings will be retrofitted for residential sale. 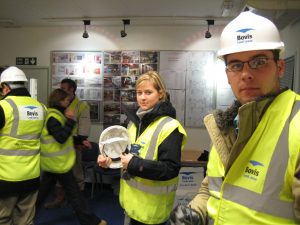 This is a design-build project overseen by Bovis Lend Lease with Land Services as the owner and BBC as the lessor. The original BBC Headquarters was built in the 1930s. Phase 1 of the project was completed about 4 years ago which included the renovation of the existing broadcasting house and the adjacent building. Phase 2 of construction connects the two buildings from the rear. The connecting building was built in a horseshoe-like shape so that the schedule would not be delayed during the demolition of an old World War II bunker located in the center of the buildings. The architecture of the buildings is made to enhance the Allsouls church in front of the building. Construction was done using 4 tower cranes that rose up through the atriums of the building, and there is a £1M/hour penalty for disruption of the existing BBC broadcasting headquarters. The structure had a few unique features since the final product needs to house a large amount of electronic equipment. The final floors will be 1.1 meters above the slab to have enough space for all of the data and power cables. Each studio needs to be acoustically and vibrationally sealed from the rest of the building. This was done by floating rooms on springs and using thick felt insulation for the walls. The 42 ton ceilings of some of the rooms in the basement were constructed on the floor and then manually hoisted into place by 10 workers. One thing that was interesting was the cleanliness of the site and the morale of the workers. Bovis boosted morale by providing workers with an onsite cafeteria, temporary indoor washrooms with complete plumbing and a changing area where workers could shower and change into street clothes. Phase 2 is estimated to cost £450M.