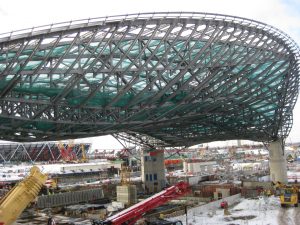 Today the group was disappointed because we were unable to visit the Olympic Stadium due to inclement weather.  London does not typically get any snow or ice so the weather severely affects construction projects and their safety.  However, we were able to visit the Olympic Aquatic Centre in Stratford.  Upon arrival at the Olympic site the group was impressed by the scale of the entire Olympic project.  The group saw an entire city being built from the ground up.  As we entered the Olympic Stadium and Aquatic Centre area, we encountered the intense security measures being employed to secure the site.  When checking in we all needed to show a passport and we also had to get fingerprint and ID clearance from workers on site to reach the Aquatic Centre.  Security is a high priority because terrorism at the games is a major issue.  To combat intruders, random security checks, escorts, biometrics, CCTV, and many other measures were visible.  After making our way through the intense security, we had a presentation from the project director of Balfour Beatty about the Aquatic Centre construction.   The most captivating portion of the project was the 3000 ton steel roof that covered the dive tank, training pool, and competition pool.  Balfour Beatty used three temporary steel structures to support the roof as it was being put together piece by piece.   When the roof was completed, a unique jacking system was used to lift one end of the roof 800 mm in order to clear the temporary structures so they could be removed.  A picture of the engineering marvel can be seen above. Another interesting aspect of the Aquatic Centre’s construction was the use of the project after the Olympic Games.  During the games the building will have a capacity of 17,500 by adding two additional temporary grand stands.   When the games are completed, the stands will be removed and the capacity will reduce to 2500.  This change allows the complex to be used by the surrounding community ensuring that it will not be vacant after the conclusion of the games. Although we were unable to visit the Olympic Stadium, we all thoroughly enjoyed our experience of the London 2012 Olympic Games construction. 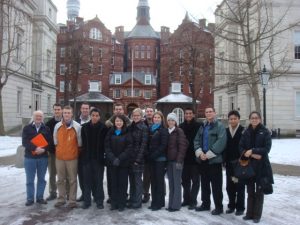 Today we visited the University College London where we heard three different presentations. The first presentation was by Prof. Nick Tyler, head of the Department of Civil, Environmental, and Geomatic Engineering. From this presentation we learned about the structure of the program and its differences from U of I. In addition, we also learned about geomatic engineering, which is the study of how we measure the world. The department has four interdisciplinary centers for learning and research; EPICENTRE (Earthquake and People Interaction Centre), HIRC (Healthy Infrastructure Research Centre), ARG (Accessibility Research Group), and CRUCIBLE (life-long health and wellbeing).  The goal of the department is to teach students how to be better engineers and build a sustainable environment. Also, engineers need to think about the problem itself instead of just the solution. The second presentation was by Raul Fuentes, an engineering student at University College London. His presentation was about the importance of monitoring systems in projects. He provided three different case studies that showed how failure can occur from improperly monitoring a project. Through his research he has learned that a systematic approach is needed for monitoring and there needs to be better management of the monitoring systems. The third presentation was by Prof. Peter Morris and he talked about the Bartlett Department. This department includes the disciplines of construction management, architecture, urban planning, and project management.  Students are researching topics such as knowledge management, sustainability, health and buildings, and modeling. After all of the presentations, we took a short tour of the engineering laboratories.  We also saw the actual remains of Jeremy Bentham which were cast in wax. He is considered to be the father of UCL. They were different than Newmark because all of the labs were in one building and they were more compact. Overall, the visit to University College London was very interesting because we were able to learn about a different civil engineering program. 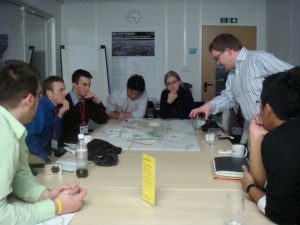 In the afternoon we attended a presentation by CH2MHILL about the London Olympic Park. CH2MHILL is the program manager for the entire project. Currently, the project is 6 days behind schedule but they are still confident that they will finish in time. They are however, under budget for the project. Compared to the Beijing Olympics, it is one third the size but there are an equal number of on-park venues. This makes the layout more compact and complex. The overall focus during the presentation was about legacy, and how the Olympic Games will help transform East London. After 2012, they plan on turning the park into a community for people in London to live. Some of the structures will be permanent however; buildings like the basketball arena will be removed. The presentations that we heard were about sustainability, quality control and assurance, site inspection, and computer modeling. The project is very sustainable, in fact, 54% of the transports are by railroad or barge. For quality assurance they have many documents to ensure high quality for the project. For site inspection, they had to demolish 231 buildings and they had numerous soil samples tested in the area. They showed us a physical 3-D model of the entire park as well as a computer model where you could fly over the park area. This used similar technology to video games such as XBox 360. Overall the company gave excellent presentations and even had a discussion panel afterwards. This was really beneficial because we had the opportunity to learn a lot more about the Olympics, especially since one of our previous visits was cancelled.  All of the presentations we heard today were really informative and just as exciting as stepping onto a construction site.