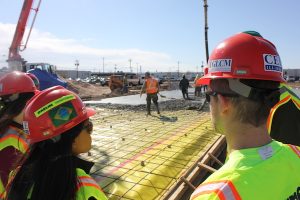 This morning marked our first official morning in Denver, Colorado. Luckily, it was not an early morning, so we were able to recover from our day/days of traveling. W.E. O’Neil was our first stop of the week, where we met with four of their employees. We met with a project engineer, Ross, the superintendent, Dale, the vice president of operations, Matt Hoster, and a new employee, Brad. All four of them had a different take on the project. Before diving into what was currently going on, each discussed their background and past experience. This let us get to know them a little bit better and hear about different locations and projects they have worked on. 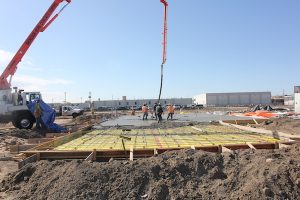 The project that we were able to walk around was going to become a Ford dealership and showroom, and a new workshop/body shop for Peterbilt Trucks. In total it is a project that is a little over $17 million and has a duration of about ten months. For the Ford dealership, we were able to witness a concrete pour, as shown in the above image. Being poured was a 6-inch concrete slab. But what was special about this slab is that it is not only going over the rebar, but there are also CreathermTM floor panels (this is shown in the image below). These panels allow for hydronically-heated floors, which is a way of insulating the floor by running heated water pipes throughout these CreathermTM floor panels. The pattern of the foam panels allows for the pipes to weave through. This floor-insulation system was something new for most of us and was interesting to learn about. 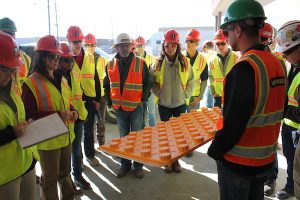 After we saw some of the concrete being poured, we went to the Peterbilt area of the project. This consisted of a building renovation and a new construction project. We were able to see the contrast in building techniques and to ask a lot of questions. Here, we learned about some of the problems/changes the W.E. O’Neil team had to make. The drawings that they were given and the actual building had some discrepancies. Thus, executive decisions were made and carried out. It was also interesting to hear about certain changes that were made to W.E. O’Neil’s scope of work, since the owner has the final say in the decisions. For instance, there are seven large truck entries to the renovation, and half of the doors are one size and the other half are a smaller size. The owner wants them all to be the larger of the two sizes, but this now creates a challenge due to the nature of these concrete walls that are post-tensioned precast concrete. X-rays and special equipment need to be utilized in order for these doors to be the right height. 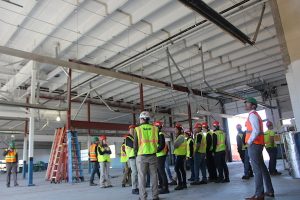 Lastly, W.E. O’Neil discussed some general construction topics with us. A big difference we learned about is the union/non-union presence in Denver. Since most of us Global Leaders have had some work in Chicago, we are used to the heavy union presence and the clash between union and non-unions laborers. But in Denver, it is mostly nonunion, so they do not have too many regulation issues. Additionally, we discussed certain issues about risk and they stated that construction is a risky business with a lot of risk and little margin. This is a career field that we all know has a large risk. However, it is visits like this one that encourage us to stay in this industry and learn as much as we can. 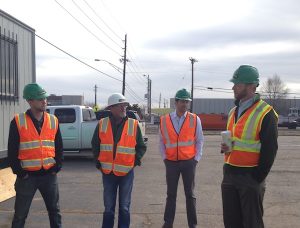 This last image, above, was our four-person W.E. O’Neil Team. From left to right: Ross, Dale, Brad and Matt.