The day for the GLCM began early with us leaving the hotel by 6:45am. We were visiting the Microsoft Data Center site in Cheyenne, Wyoming. Hensel Phelps, the general contractors for the project were kind enough to host us and give us a tour of the project. The weather was great which made the 2-hour car ride scenic and pleasant. As we reached closer to the site, we realized that it was very isolated. The site was actually in the middle of nowhere. On arriving at the site, we were greeted by Mr. Kevin Hatcher, the quality controls manager for the project. Kevin is an alum of the University of Illinois who recently moved to Cheyenne for the project. We were directed to a conference room for a presentation about that project, where we met Travis Poland and Matt Schuler who are the Project Manager and Project Superintendent respectively.

Microsoft began constructing data center about 15 years ago. Cheyenne was chosen as a potential site four years ago because of a lot of factors such as good access to transportation, favorable climate and tax initiatives in Wyoming.  Currently the complex has two operational data centers- CY1 and CY2 while Hensel Phelps is constructing the CYSO4 data center. The total project cost is $250 million with an initial construction schedule of 12 months. But with certain changes in design and scope, the schedule of the project was extended to 17 months. Out of the 17 months, 9 months were kept for commissioning the various equipment that would be installed in the data center. Since the project was very fast paced, the crews were working 24-hour shifts initially and currently working 18 hours shifts 6 days a week.

The 350,000 sq-ft site has 4 core network rooms (CNRs), 1 administration building and 4 availability zones (AZs). All of the buildings are made from structural steel with concrete slab on grade. To ensure that all the servers and equipment do not get overheated, 160 air handler units have been placed strategically throughout the 4 CNRs and 4 Azs. The cooling system in this data center will be an evaporative cooling system, which is very unique. Since these servers consume a lot of power, the project also includes 21 generators with a 49 MW power capacity servicing the different buildings. Some other fun facts that we learned from the presentation were that the project had 48 miles of underground conduits, 33 miles of medium voltage cable and 25,000 miles of fiber optic cables. 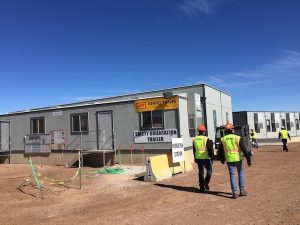 After our presentation, we took a tour of the jobsite. Security was a big concern for this project, which became apparent as soon as we entered the site. The planning and execution had a lot of security consideration to ensure that the client was happy. During the tour we learned about the various challenges that the project faced including harsh weather, uncoordinated underground design and phased construction. The site was located in a very windy area, which made it difficult to maintain productivity. To ensure that the project is completed on time, the management made a decision to pre-fabricate a lot of the construction. Apart from this, we learned that Hensel Phelps had to keep in mind the intangibles while executing the project. An example of this was that the concrete slab was cleaned everyday to ensure that it looked “new” when the building was handed over to the owner. 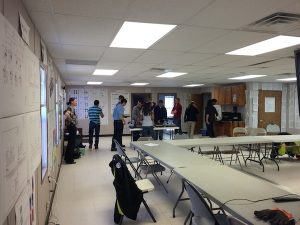 After the tour, we returned back to conference room, where we were served lunch and had a Q&A session with our host. We really enjoyed our visit and learned a lot from the tour.  We would like to thank Hensel Phelps for giving us an insight into this very interesting project.