Pantheon Visit and Walking tour of the Roman Historic Center
After introductions with our Borromini University trip leaders, and a brief safety, rules, and regulations presentation. In the early afternoon in Rome, the group set out for a walking tour led by Thomas Rankin our Italian representative leader. Notably a knowledgeable architect and instructor at the Borromini Institute. The walking tour began at the University Building and covered several miles of the central Roman historical center. 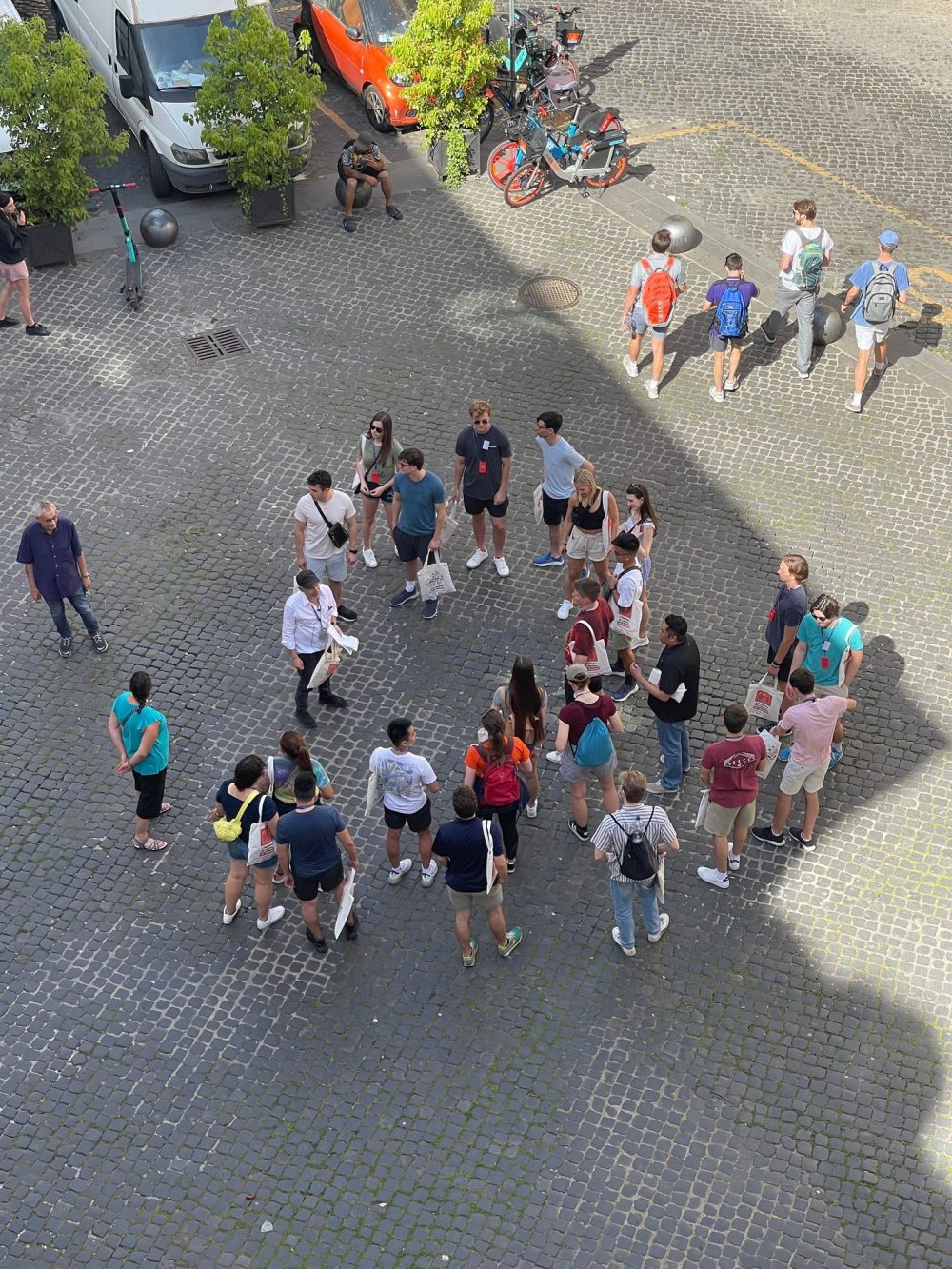 The tour enhanced in part by knowledgeable commentary into one walkie talkie like headphone supplied to each of the students for the purpose of being able to hear Professor Rankin, began down the Calles of cobblestone leading to the first stop Piazza Navona. The Piazza is an open courtyard with a fountain famous for its use historically as a stadium for Olympic type field games. The large stretching piazza which lies in front of the now operating Brazilian embassy was one of roughly 5 main operating stadiums in the first century of Rome and was nearly destroyed by Mussolini who wanted to turn the piazza into a straight raceway. 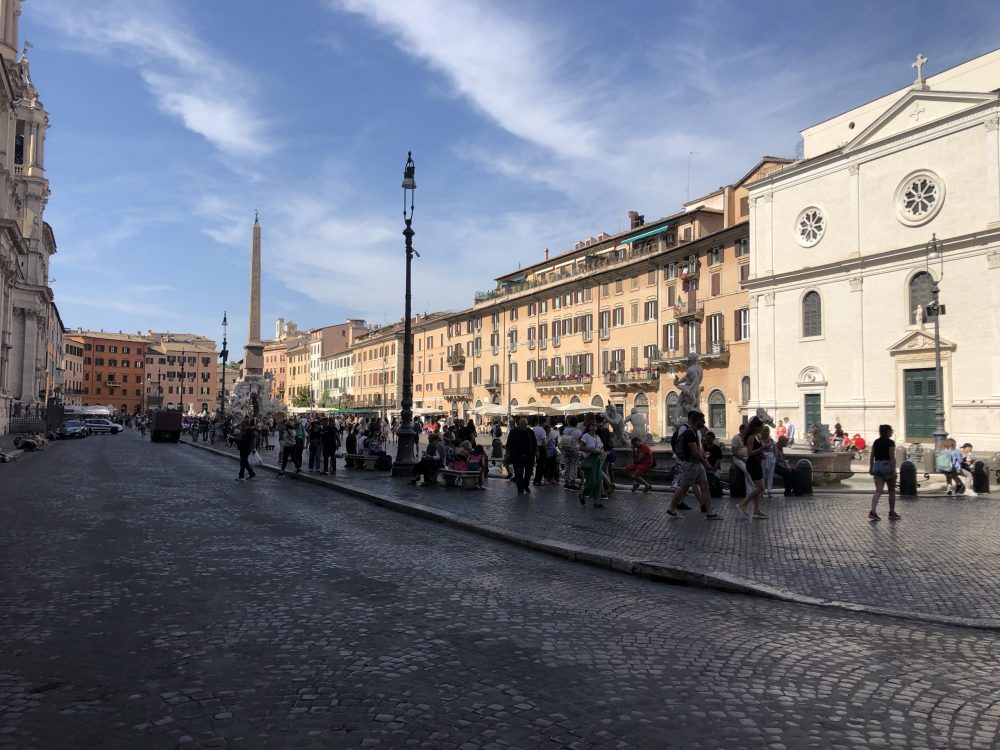 The second stop led the group to a famous work from an architect who the Borromini University is now currently named. This Sapienza University of Rome building has served as a religious place, and a place of study since its construction in the baroque period. Notably carved into walls along the building are the records of historical floods from years in which the Tiber River reached over 6-ft above the walking surfaces in many areas. This, one of the many civil engineering problems which are central to roman infrastructure because Rome is a historical swamp. 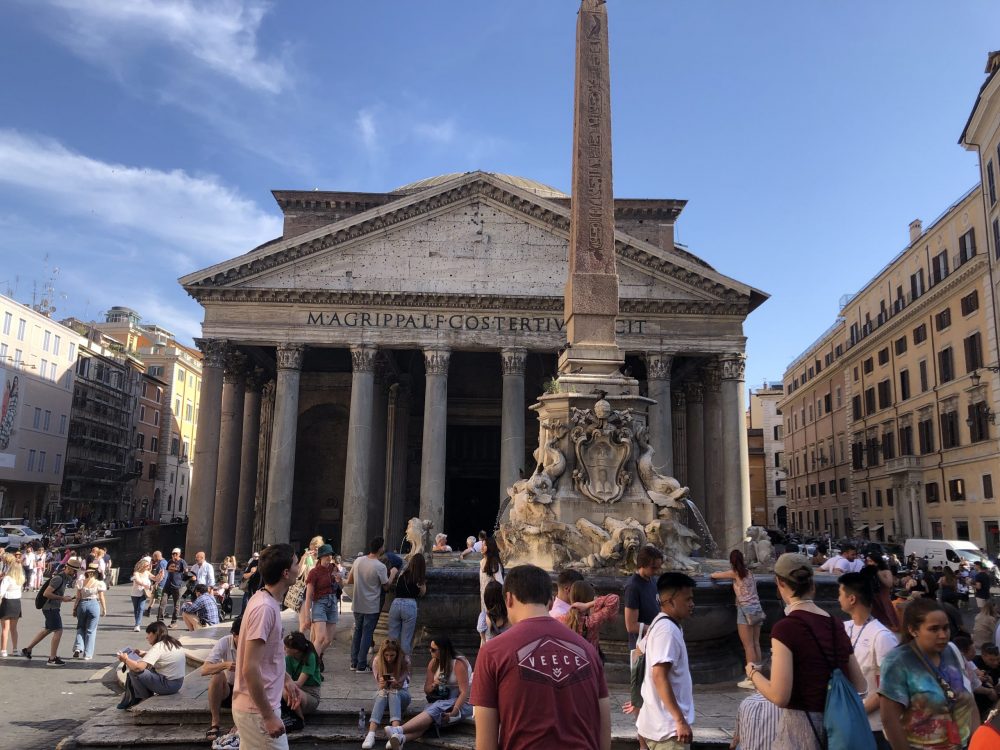 From here the main site and one of the central focuses for the days walking tour was the Pantheon. Beginning with the exterior back side the structure of the pantheon was analyzed and viewed both to understand how it was constructed, and how it is still standing to this day. Most of the exterior in the sides and rear of the building consists of 2ft wide bricks laid horizontally and repeatedly built up into arches which were later filled in with bricks as well. The building having been in use since its construction in 27 B.C. now lies nearly 15-20ft beneath a majority of the grade of the surrounding area as historic Rome was once much lower than the modern Rome. 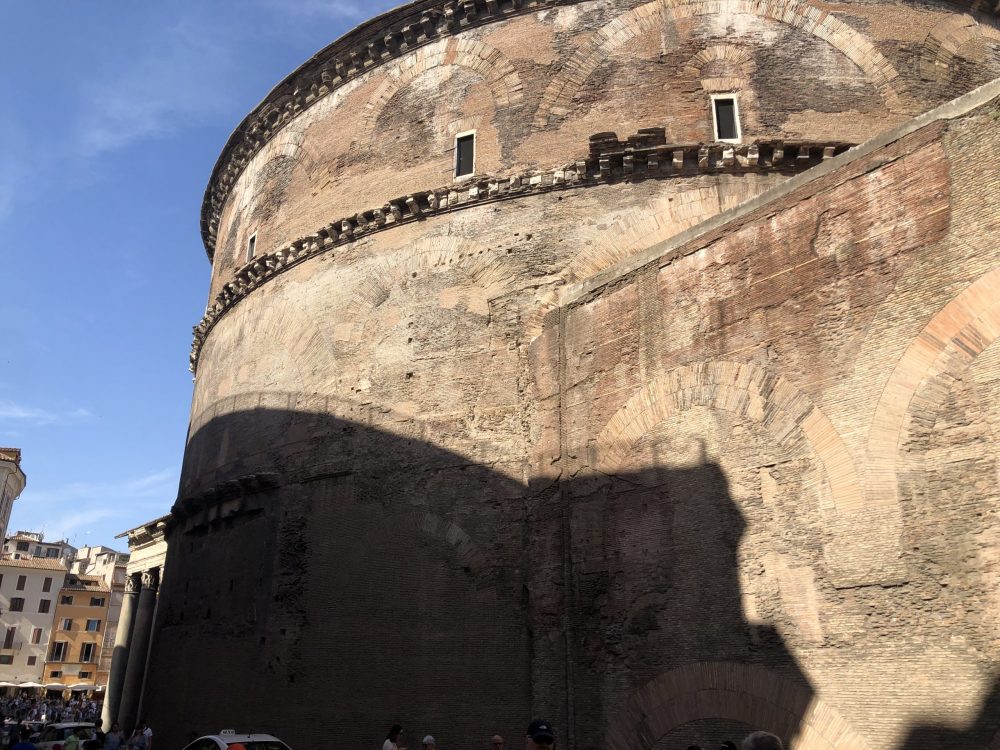 From here the front columns were explored, and finally interior viewed for the amazing geometry, magnitude and more which make the building so special. Many of the materials having been brought over from Egypt such as the Granite. The materials are one of the many marvels of Pantheon. One of large slabs of floor that has been used are made of porphyry which is very rare and has been weathered for years. It is important to note also that the skylight lets in rain which runs over the floor slabs and into very small drains within the structure. 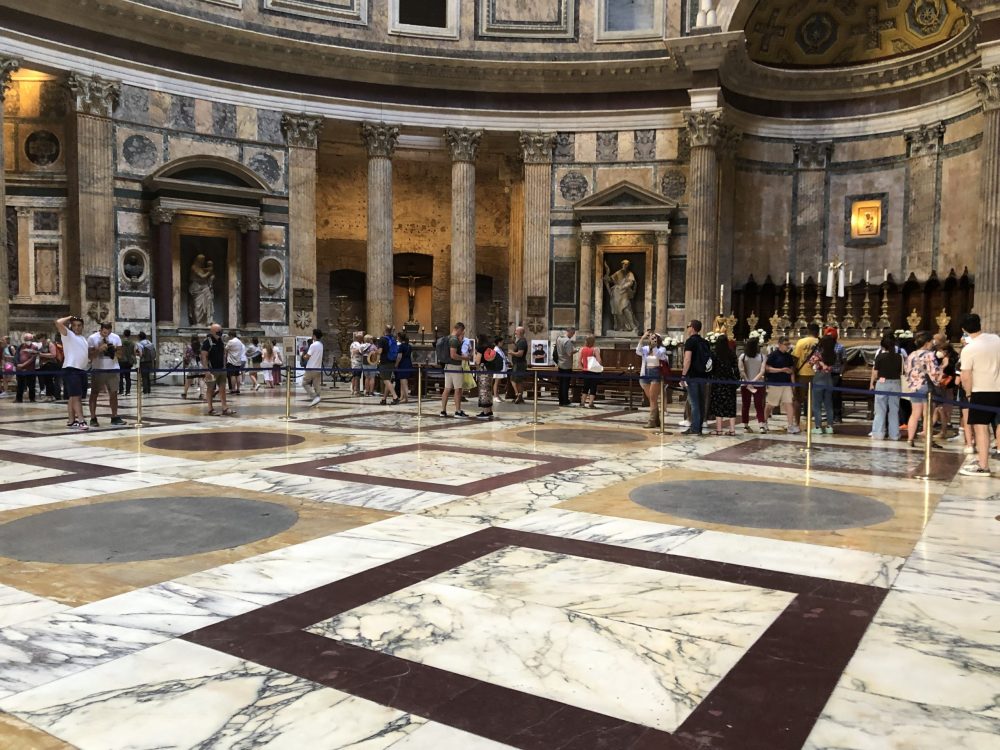 The dome of the pantheon is one of the most impressive and large structures built so long ago. The structure features impressive construction materials and methods including strong heavy aggregate-based concrete in the lower layers of the dome, and lighter pumice-based concrete in the upper most part of the dome. Lastly, other important items seen on tour of the Pantheon included several important figures who are buried in the building and the many altars and religious symbols. 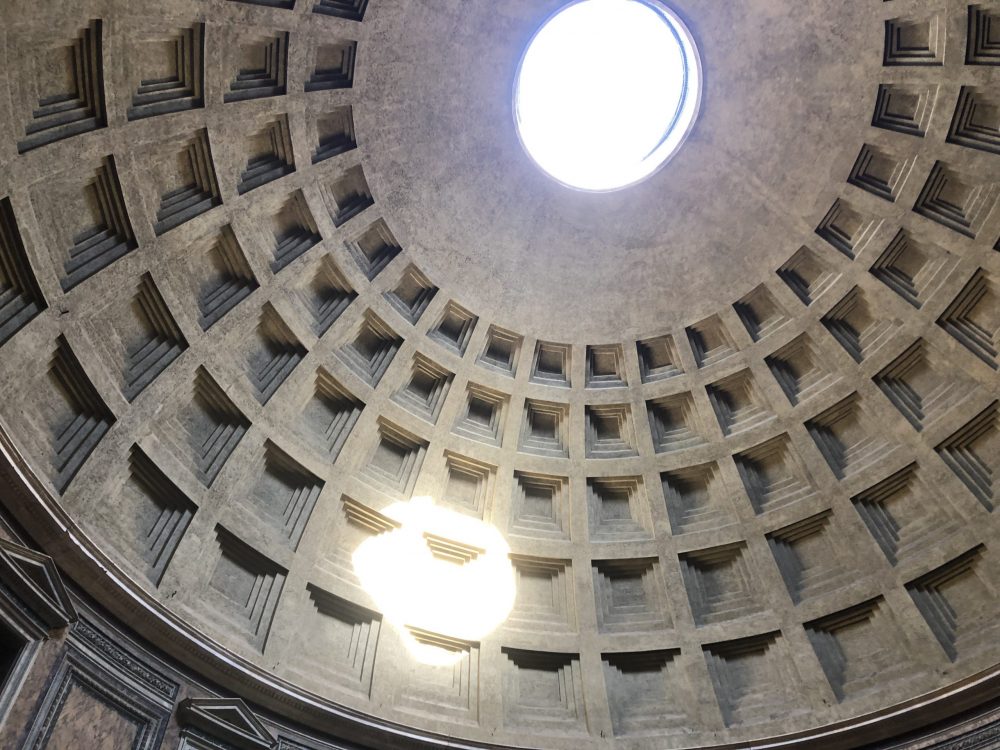 The walking tour then continued with visits to the Sopra Minerva St. Mary Gothic Cathedral, which acts as the single gothic cathedral in Rome. The Medieval Steps and Michelangelo’s steps which both lead to the capital building and the hills of Rome featuring a famous statue of Marcus Aurelius. 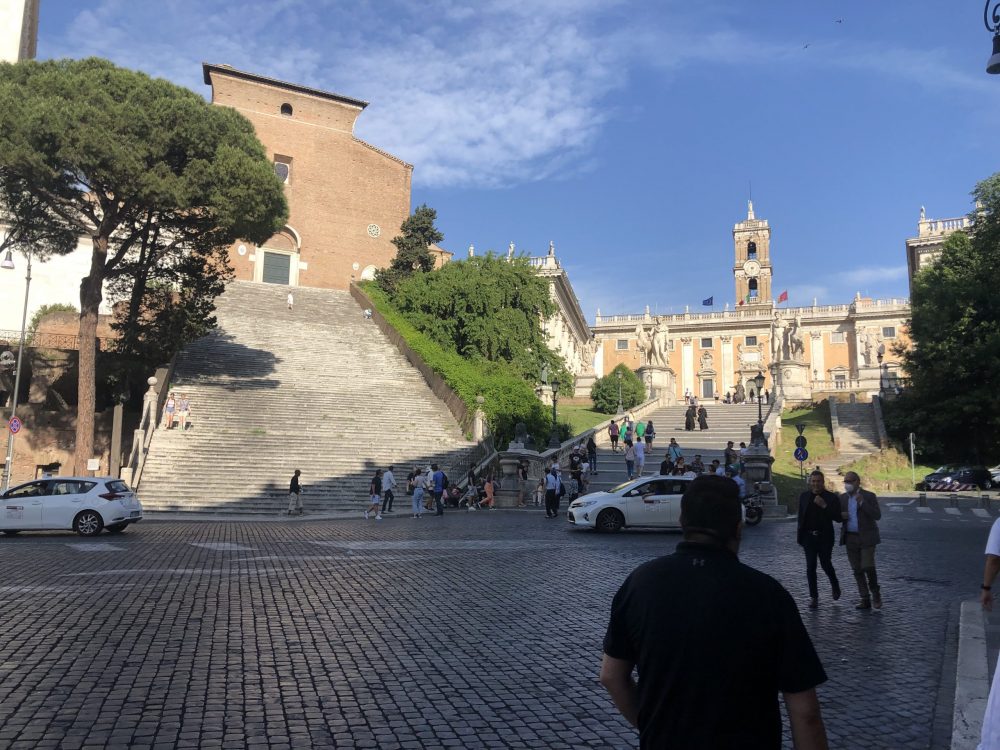 The walking tour also finished with an overview from the peak of the Ancient Forum followed by a walk back through shopping and eateries along the streets back to the University. The night ended with Aperitivo at Camillo B. a nice restaurant in Rome. 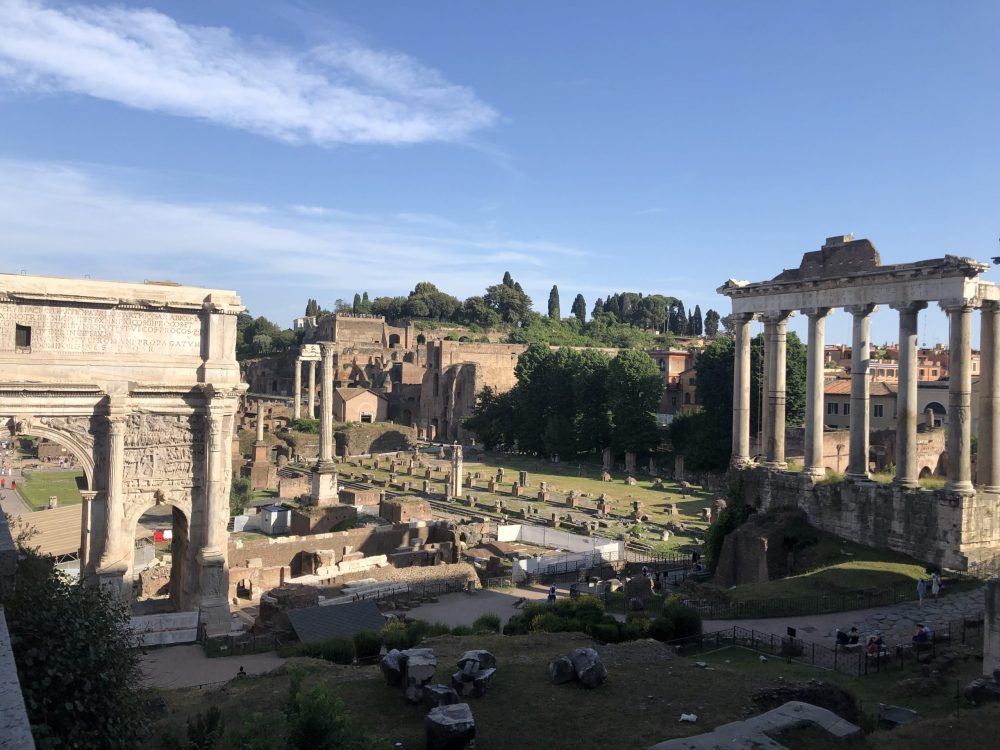 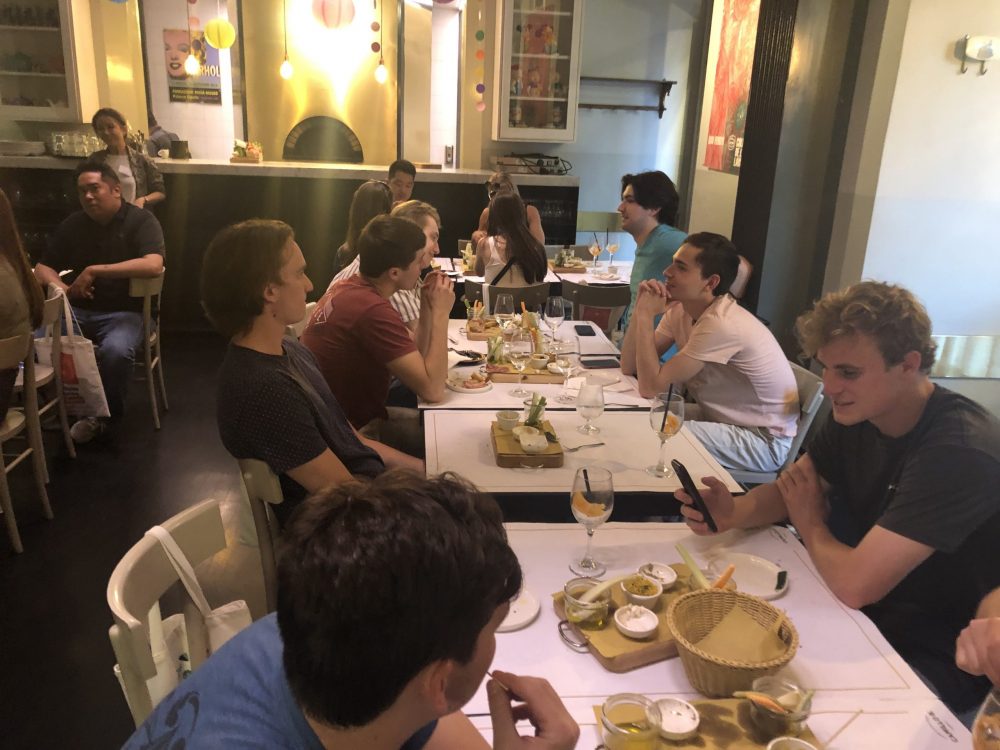