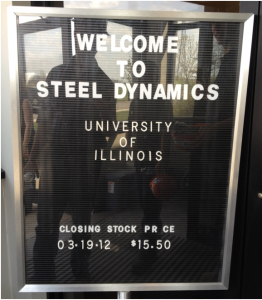 Started approximately 10 years ago, the Columbia City Steel Dynamics Inc. plant resembles a city among the hilly fields and forests of north central Indiana.  Our introduction to the company started with a trip through the heavy security of the plant’s outer perimeter.  We were waved through the gates by a friendly security guard who pointed us to the main office of the plant.  There we were greeted by our tour guides, Matt Hallam and Drew Seeley both metallurgists for Steel Dynamics.  Matt and Drew provided a brief background of the company which included their sister company, the effects of the economic downturn on the industry, the types of steel that the plant turns out, and the basics of the heavy and medium size mills that are on the Steel Dynamics campus.  Before leaving the main office, we were provided with green welding jackets, ear plugs, gloves, and other necessary personal protection equipment.  With PPE in hand, we left the office with the instruction to assume that everything and anything that we may encounter in the mill was hot.

Walking into the plant, Matt and Drew discussed how scrap steel is brought into the plant via rail, melted, and molded into new sections of steel.  Typical sections include both large and small I-beams, channels, Z, T, M, and rail.  Our tour took us into the depths of the steel plant which can only be described as a miracle of modern technology.  Working 2 shifts of 12 hours each, the plant is kept alive by non-union workers working 4 days on, 4 off, and 4 nights on.  We walked through the mill shop and into the ladle metallurgy furnace control room where Matt described how scrap steel is melted by 145 megawatt furnaces in 120 ton capacity ladles.  Walking out to the furnaces, we watched through the protective lens of welding shields as scrap steel was melted to 3000 degree Fahrenheit, turning into a boiling mixture of iron and other elements that resembled the surface of the sun.  Substations on site provide the furnaces with the 3-way AC current that is needed to melt the steel.  As a comparison, Matt described how the electricity used by the plant could be used to power Ft. Wayne, Indiana for 1 hour.  We left this area and went on to view the continuous casting process.  This process takes the molten steel and molds it into wide flange sections approximately 25 feet in length which are later molded into other sections.

Our tour took us through soot saturated air, up and down stairs, along catwalks where we could see the 5 to 250-ton overhead gantry cranes working, and down to the rolling mill floor where the hot-rolling process takes place.  In this area, we encountered massive stacks of molded steel, called “blooms”, and massive sets of machinery that transform the previously described wide flange sections into finished sections for shipment.  These machines, called the breakdown and tandem mills, utilize “rolls” to take the wide flange sections, remove the oxidation, and press them into the desired sections.  The “rolls” that were not being used were stacked in the plant representing $7 million of inventory.  Leaving the rolling mill floor, we viewed a tensile test on the recently produced steel.  The freshly rolled steel yielded at 80,000 lbs which was described as typical for the plant.  From this area, we were escorted back to the main office where we returned our personal protective equipment and bid farewell to Matt and Drew.

Thanks Steel Dynamics for a great tour! 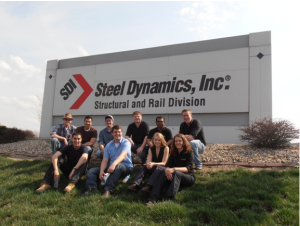