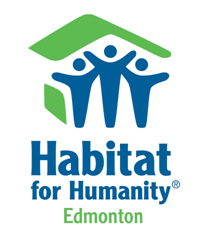 Wednesday morning started bright and early for the Global Leaders as we anticipated an opportunity to gain real hands-on construction experience.  We joined Habitat for Humanity of Edmonton for a day of residential construction work; they are presently constructing 23 duplexes on a single site in north Edmonton, several of which are already finished.  After a safety orientation, we were split up into 3 crews, 2 of which worked on framing while the third crew worked on hanging drywall.  The drywall crew enjoyed working inside and made great progress while getting to know the Habitat staff.  There were a few snow flurries, but the temperature was bearable and one framing crew was able to set a few second floor joists, while the other installed top plates at a different duplex.  The Edmonton Habitat staff was quite patient and willing to teach.  During lunch time, Kim Sherwood, the HFH volunteer coordinator and Glennis Kennedy, volunteer coordinator for the community of Saint Albert, Alberta, visited the jobsite and surprised us with a cake with the message ‘Welcome University of Illinois!’  We enjoyed getting to know them and other HFH staff and learning about their on-going projects.  After a great lunch of fish and chips we worked for a couple hours and then departed for Fort McMurray.  Over the course of our time in Calgary and Edmonton we had heard many stories about route 63 between Edmonton and Fort McMurray, but found the drive to be rather uneventful (once we completed the first hour over snow covered roads).  We arrived after about five and half hours of driving and along the way we passed several heavy haulers carrying oil sands upgrading modules heading for the oil sands mines north of Fort McMurray.  The oil sands mines are our destination for Thursday and Friday. 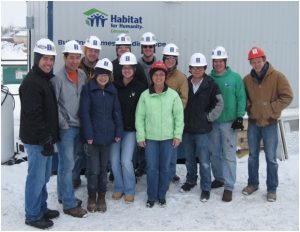