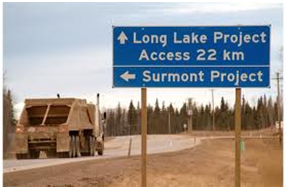 After a day of learning how Imperial Oil uses strip mining techniques to mine oil sands north of Fort McMurray, we set out to see how ConocoPhillips is using Steam-Assisted Gravity Drainage (SAGD) on the Surmont II Project (located south of Fort McMurray) to retrieve oil from deep below the surface of the Athabasca Region of northern Alberta.  Once at the security gate of the Surmont II project site we boarded a shuttle and were escorted to the Bantrel Orientation Trailer by Randy Anderson, the Bantrel Site Manager.

Upon arriving at the Bantrel Orientation Trailer, Randy introduced us to Patrick King.  Patrick is a firefighter, EMT, and Bantrel’s HSE Specialist.  As is customary in Canada, Patrick provided us with a site-specific safety orientation.  He explained to us that as a part of the Bantrel company culture, safety is a 100% non-negotiable aspect of the Surmont II project.  He described safety as a lifestyle, saying that there is nothing so urgent or important that we cannot take the time to do it safely.  Patrick went on to describe how ConocoPhillips and Bantrel have established a zero-tolerance dry camp policy which works hand-in-hand with Bantrel’s “Triple Zero” safety policy.  “Triple Zero” is a policy that works for zero recordable injuries, zero vehicle incidents, and zero spills.

Following our safety orientation, Randy provided us with a brief look at the history of Bantrel.  Started in 1983 as a joint venture between Banister Foundations, ACON, Trimac Trucking, and Bechtel, Bantrel has grown to be an industry leader in engineering procurement and construction for the energy, chemical, and power industries as well as emerging related markets including alternative energy and fuels.  Since 1983, Bechtel and Trimac Trucking have become the major stakeholders in the company.

Adeniyi Akanni, Lead Civil/Structural Engineer for Surmont Phase 2, took over from Randy and provided us with an overview of ConocoPhillips and Surmont II.  Currently the 7th largest global producer of petroleum products, ConocoPhillips envisions itself as the leading gas and bitumen producer in Canada.  It is this vision that has caused them to tap a portion of the nearly 175 billion barrels of proven reserves that lie beneath Canada.  Much of this reserve lies in oil sands which are mined using strip mining or in-situ techniques.  In his presentation, Adeniyi described in-situ techniques as being the preferred method since nearly 80% of the oil sands are located beneath more than 200 feet of overburden.  He stated that the depth of overburden steadily increases as one moves from north to south through Alberta.  It is because of this increase in overburden depth that the Surmont project uses in-situ methods to extract oil.

Following his explanation of why ConocoPhillips is interested in the oil sands, Adeniyi went on to describe the Surmont II project itself.  The multi-billion dollar project is Phase II in the construction of the Surmont in-situ oil sands production facility.  The facility is designed to produce approximately 118,000 barrels of oil per day over its 40 year production lifespan.  Adeniyi also described how Steam-Assisted Gravity Drainage (SAGD) is used to remove the oil from deep below the surface.  According to Adeniyi, SAGD is the most commonly used method to recover oil in the Athabasca Oil Sands Region.  Two horizontal wells are directionally drilled from a central wellpad.  In a nearby plant, steam generators powered by natural gas heat non-potable saline water and transform it into steam.  The steam then travels through above-ground pipelines to the wells where it is injected into the ground via the top well where it heats the oil to a temperature at which it can flow by gravity into the producing well.  This process of steam injection and oil production happens continuously and simultaneously.  The resulting oil and condensed steam emulsion is piped from the producing well to the plant where it is separated and treated.  Following this, the water is recycled for future steam generation and the oil is blended with dilbit, a lighter oil, and sent to a nearby pipeline for distribution.  The group was stunned to learn that 90% of the water is recycled.  In a process which uses 2.5 barrels of water to produce 1 barrel of oil, a 90% recycle rate is crucial to maintain environmental integrity.  Adeniyi stated that ConocoPhillips is totally committed to the complete reclamation of the nearly 1 square mile of land that the project site resides on.

After the presentation we had the opportunity to enjoy lunch in Bantrel’s 3000 man camp.  Over lunch, we were introduced to Ray Funk, an SNC staff member, who described the logistics of constructing such a massive camp in the center of the Alberta wilderness.  Our discussion with Ray included material and labor acquisition and management, means and methods, and job safety.  Following lunch, Ray took us on a guided tour of the camp.  On the tour we had the chance to view individual dormitory rooms, dining halls, storage areas, the kitchen, and much more.

This tour was followed by a shuttle tour of the project right-of-ways and CPF by Corey Langford.  Corey came prepared with several printouts showing site grading plans.  The 11×17 plans accurately depicted how the project is working to balance the cut and fill of overburden to efficiently grade the site.  Corey also gave us a brief update of where the project stands in terms of schedule.  He described how 65,000 cubic meters of earth are being moved per day resulting in approximately 40% of the site’s earthwork being completed.  Looking ahead: tank foundations are due to be poured in June; helical pile installation is set for August followed by the arrival of nearly 800 modules.  We ended the tour with a group picture next to one of Surmont’s many heavy-haul trucks. 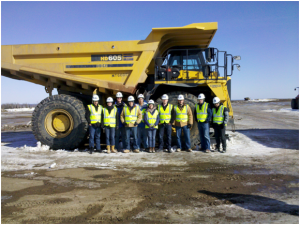 Our day ended with a short question-answer session with Randy Anderson in the Bantrel main conference room.  There we had the opportunity to thank Randy and the rest of our hosts for their hospitality.  We left the jobsite and were reminded of the Surmont dedication to safety as we passed a sign which said “I’d rather be late 10 minutes in this lifetime, than be 10 minutes early in the next.”