Friday morning began with the Global Leaders meeting up with Graham Infrastructure, one of the Graham construction companies that together completed over $2 billion in projects during 2010.  Presently, Graham is constructing the Peace Bridge, a Santiago Calatrava designed pedestrian bridge across the Bow River in downtown Calgary.  The new bridge will span 400 feet from abutment to abutment, will not be in contact with the water at any point, and is expected to be above the level of a 100 year flood.  Total project budget is over $20 million, and it is expected to open in 2011. 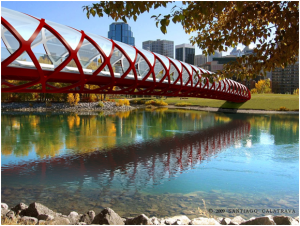 The Global Leaders tour of the site was led by a combination of a city of Calgary engineer, the structural engineer of record, and the Graham project management staff.  We were able to walk on the temporary bridge, ask many questions about the bridge design, and tour the temporary enclosure where all welding, grinding, and painting is presently taking place.  Having the city engineer, structural engineer, and construction managers all together led us into a good discussion about integrated project delivery and how young engineers can adjust their thinking in order to work better on multi-disciplinary teams towards the end of greater value to construction clients. 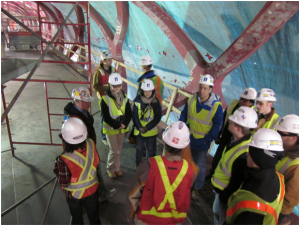 Graham elected to build a temporary bridge structure across the river on 36 piles, while constructing the finished bridge on land.  This will allow them to fully enclose the working area while all welding, grinding, painting, and glazing is completed.  Presently, the abutments have been poured, the steel structure has all been assembled and preparation for painting is being completed.  The steel structure of the permanent pedestrian bridge will eventually be jacked across the temporary bridge on a pair of rails.  Once it is lined up with the abutments, it will then be moved laterally to its final resting location and the temporary bridge will be removed. 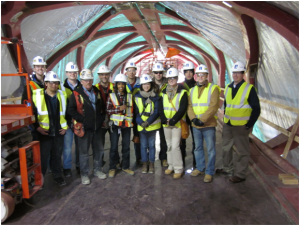 After the morning in downtown Calgary, we moved to the campus of the Southern Alberta Institute of Technology (SAIT) for an afternoon site visit with PCL Construction.  PCL is the largest contractor in Canada, and is currently constructing the approximately $250 million Trades and Technology Complex on the SAIT campus.  The project is made up of 3 separate new buildings plus a renovation totaling 70,000 square meters.  One of the new structures will be ready for occupancy for the fall 2011 semester, while the entire project is scheduled to be complete in 2012. 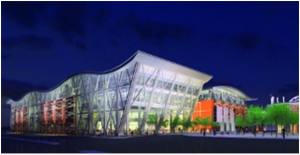 Our site tour began with a presentation about the PCL family of companies, presently ranked #8 on ENR’s top 400 Contractors.  Following a safety orientation, we split into two groups and toured the large building site.  The site included several different phases of work being completed.  The South Wing, which will open in September, has work on-going on the mechanical rough-in, interior finishes, and completion of the curtain wall.  The South and Center Wings are nearly topped out with the structural concrete; rebar placement, formwork construction, as well as placing/finish of concrete were all on-going.  There are six tower cranes currently in operation, over 400 workers on site per day, and virtually no material staging area, thus this is a daunting project management challenge.