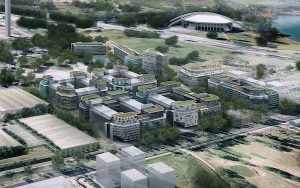 Today the Global Leaders resumed their site visits, starting with a trip to Villa Olimpica, home of the 2018 Youth Olympic Games. Villa Olimpica is located in southwest Buenos Aires, just before the Buenos Aires Province. While the Global Leaders failed to qualify for the Olympics this year, a nice consultation prize was a tour of the massive project Villa Olympica that has an area of approximately 120,000 square meters or 10 hectares (24.7 acres), consists of 31 different buildings, was worked on by 50 different contractors, and accumulated a total cost of approximately $2 billion USD. The tour was led by Florencia Piñero, lead architect and project manager of Villa Olimpica. 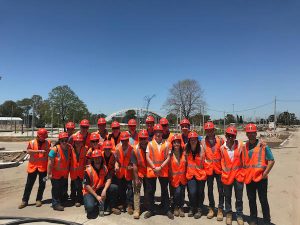 Demolition of existing structures in the area began in 2015 and was followed up with the construction of the buildings in 2016 and 2017. The project is ahead of schedule and overall construction is expected to be completed well before the games begin in October of this year. Due to cash flow constraints, infrastructure as well as building work all began at the same time, with every building beginning within the same one-month period. Many complications occurred at first due to the large volume of work being done in a very limited area; as many as two-thousand workers could be on site at once during peak working times! The thirty-one buildings will serve as temporary homes for the athletes and each building was constructed by a different contractor. There is a set of specifications that was put in place that the contractors have to follow so that construction will finish before the games, but otherwise each contractor had the option to design their building however they would like to! 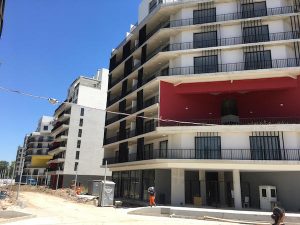 In 2013, Buenos Aires won the competition to host the 2018 Youth Olympic Games in an effort to bring something positive to an otherwise depressed region of the city. The area surrounding Villa Olimpica has the largest amounts of informal settlements and highest rate of youth migrating out. By winning the competition to host the Junior Olympics, Buenos Aires now has the opportunity to transform a hurting area of the city into a region of hope and prosperity. 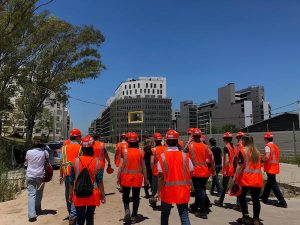 The underlying purpose of these buildings is to help provide a boost to the surrounding economy and to the lives of the people who live there. The thirty-one buildings will house four to six thousand athletes traveling to compete in the games. The athletes will remain in their temporary housing throughout the couple weeks in October that the games will last. When the games are over and all the athletes are gone, the buildings will then be used as apartments to house individuals and families from the area. The project was publicly funded and will be turned over to private sectors after the completion of the games. The buildings consist of one or two story apartments that can house one, two, or three people and will be available to residents of low to middle incomes. The kitchens will need to be finished after the games and will take six to eight months before residents can move in. 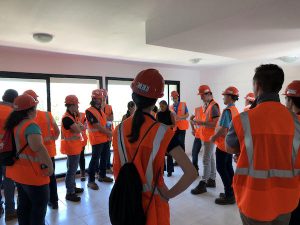 One example of a building that has already changed lives is the daycare on the edge of the Villa. Once a rundown daycare that would be considered safe to no one, the Villa Olimpica project rebuilt the structure that is now known as Rayito de Sol (little ray of sunshine). We were given a tour inside the sanctuary that is open seven days a week for kids that age from forty-five days old to a few years. All of the kids are split into three sections based on their age, and each section eats lunch together and even has their own specialized rooms to play and nap! (We were kindly asked to not take any pictures within the building). Needless to say, the future is looking bright at Rayito de Sol, and for the whole area of Villa Olimpica! 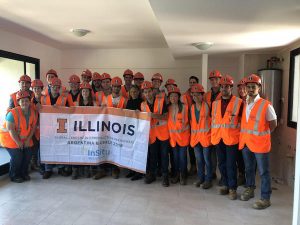