Following an eventful Friday, the Global Leaders took a break from the grind to enjoy a more cultural look into Buenos Aires. The city itself is jammed packed with a wide variety of neighborhoods that can teach us a great deal about the culture on why the city is built the way it is. The first of these visits was in Buenos Aires’ newest neighborhood: Puerto Madero. Located on the Rio De La Plata, Puerto Madero was Argentina’s gateway to the outside world. It was the port where all goods coming in and out of Argentina were shipped and stored. But soon after the end of world war 2, this trade came a sudden halt. After years of abandonment, Buenos Aires saw use in the abandoned port and converted the old factories and storehouses in apartments and storefronts. This reconstitution of the area is currently taking place and making Puerto Madero the newest area for land development. 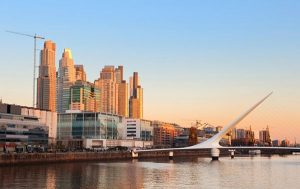 The tour was about the problems faced in the construction of Puerto Madero and how this effected its growth. The biggest problem was the land itself. Puerto Madero was originally created by placing fill into the Rio de la Plata. Thus, creating land with an extremely high water table. Add to that the inability to go to dig into bedrock, and we have a disaster of controlling settlement and weight of large scale skyscrapers. This problem was fixed, however, with the introduction of column footings that act as posts in the ground to help strengthen and compress the soil allowing grand skyscrapers and residential complexes to be built. The largest skyscraper in Puerto Madero is currently under construction and is 54 stories tall. Typical duration of these projects is two years with the majority of the time being used to construct the underground foundations. Retaining walls and extra reinforcement are pile driven into the ground to help with the firmness of the soil. This method of construction has allowed the skyline of Buenos Aires to take a dramatic shift in the past 7-8 years. 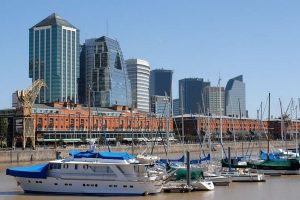 The other problem we discussed along the tour was the ability to transform the old factories into apartment complexes while also maintaining the original façade and architecture of those buildings. The people of Buenos Aires pride themselves on their history and have a strong desire to maintain the look of the old buildings. The majority of structures are all original buildings that have been repurposed and modernized giving the neighborhood of Puerto Madero a unique blend of 1900’s sea port mixed with 2000’s modern city. The pictures below depict this perfectly through the apartment complexes and hotels in the area. The best example shown is in the first pic with the 1910’s French architecture mixing in with modern day aluminum glazed windows. 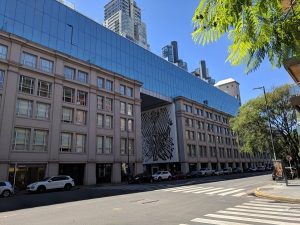 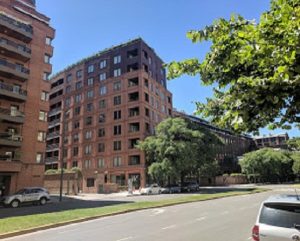 Although not originally intended, the skyscrapers were constructed to bring a new architectural style to the city, bringing Buenos Aires into a more modern setting. 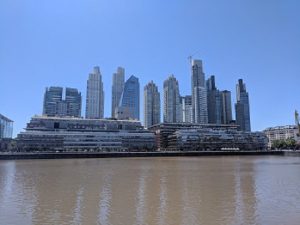 The tour wrapped up with cultural scenery of Puerto Madero including the original port cranes and ships used back in the day. 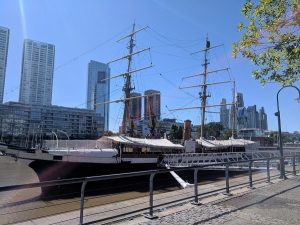 After the Morning tour, the rest of the day was spent exploring cultural hubs within the city of Buenos Aires. Two groups split up to explore La Boca and the Tolima Market. Lo Boca is famous for its festive atmosphere and the colored houses that line its streets. 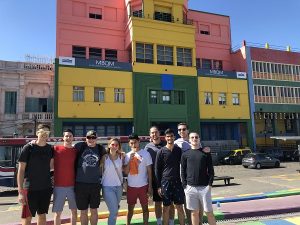 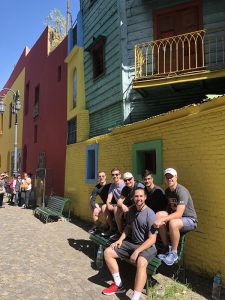 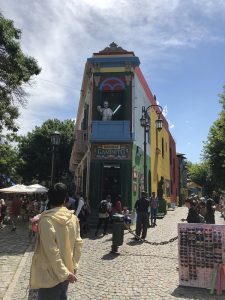 The day finally wrapped up with the meeting at Tolima Market where both groups explored the various artisans of their wears and ate local Argentinian cuisine. 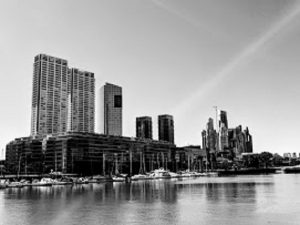