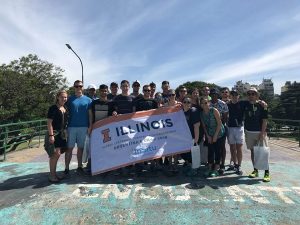 Welcome to Buenos Aires, Argentina! Today the GLCM group started their first official day in Buenos Aires. Many of us traveled from different destinations. Some for us experienced delays, missed flights, and cancellations, nonetheless, we made it safe and ready to explore. 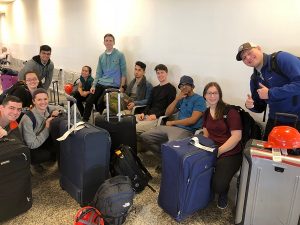 In the afternoon, we met our tour guide, Sheila, and traveled by public bus to a building where InSitu Programs (the touring company) has an office. This was the group’s first experience taking the bus. We were all given SUBE cards that you scan when entering the buses. Here in Buenos Aires, the bus system is vast and relatively cheap, a great way to get around. 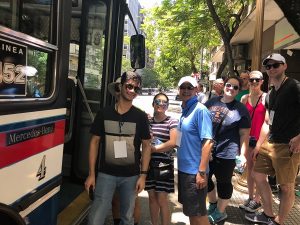 At the office, Sheila and her colleagues Leslie, Murphy, and Daniel gave us an orientation about our trip, along with safety tips and other general information. 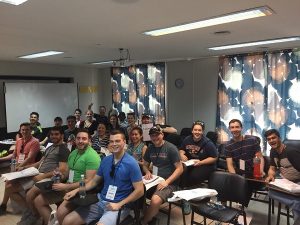 After orientation, we took another bus to the famous, Recoleta Cemetery. A UBA architecture professor, gave us a walking tour of the cemetery. This cemetery is the 2nd most visited attraction in Buenos Aires, and with great reason. The cemetery opened in 1822 and was the first ever cemetery in Buenos Aires (previously most bodies were cremated). The majority of people buried in the cemetery were famous, governmental officials, and/or just extraordinarily wealthy. Another aspect of the cemetery is that it is not religiously affiliated, and anyone with the money or stature can be buried there. 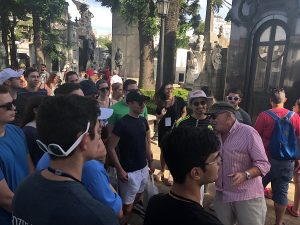 Each mausoleum seemed to have been built to out-do the next. Our tour guide estimated that a square meter of space costs $15,000-$20,000. Most mausoleums had several tombs for family members. Over 27,000 bodies occupy cemetery. Our tour guide walked us through, stopping at these extravagant tombstones, explaining some of their stories. After the cemetery, we continued with a walking tour through an affluent area in the city, where there were several embassies and some older architecturally significant buildings. We continued walking until we were back to the hotel. After a long day of sightseeing, we were ready for dinner. 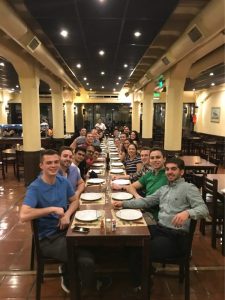 Our welcome dinner was at a traditional Argentine asado. In Spanish, asado translates to barbeque, a very popular style of cooking here in Argentina. In buffet style, everyone filled up on an assortment of meat, with many other salads and sides. There were many different types of meats that were grilled, as well as vegetables. The main meal was delicious and was followed with a wonderful selection of desserts, ranging from traditional flan and dulce de leche filled crepe, to chocolate volcano cakes and ice cream. It is custom to eat dinner in Argentina around 9-10pm. Needless to say, with full stomachs, we headed back to the hotel ready for some rest! 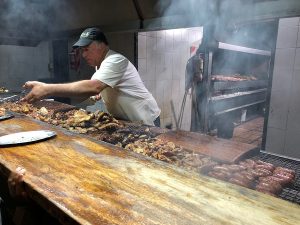 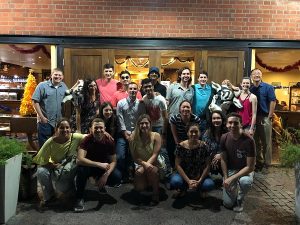