On January 6th, our third day in Buenos Aires, we took a trip outside the heart of the city to visit a residential construction project at Vidal 3532 Remedios de Escalada. We met with architect Mercedes Wodtke who was running the project under the ARQTIPO architect group. The project was a 4 story, 9-unit complex that featured two duplexes, a shared pool, and a shared stone grill. 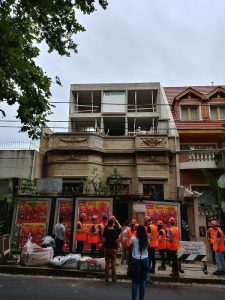 We discussed that buildings in Buenos Aires built before 1940 need to be inspected by the city government before they can be torn down. In this case, the new building needed to maintain the original facade to preserve the image of the city. This led to many problems with foundation excavation which ultimately led to the building being excavated by hand. 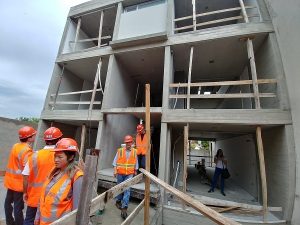 The project duration was originally planned to be 22 months, but the project was on its 23rd month of construction and was expected to take another 3 months.  One main reason for delay was the use of stone tiles on the wall to imitate the style of the original building. The tiles must be treated in a tradition way that required many steps. 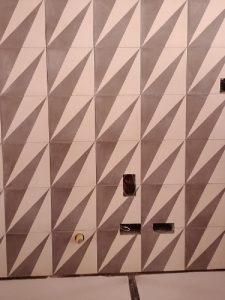 We also discussed the process of getting permits and the city’s involvement in the project. The city government has building codes called the FOT. The FOT uses multipliers based on the size of the lot and size of the block to calculate the maximum square footage and volume of the building. To stay under the square footage limit given by the city, the architects at ARQTIPO designed the top floor of the duplexes to have openings in the floor plan with a cat walk to connect bedrooms. 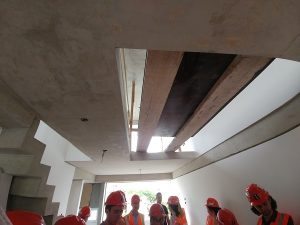 Later in the day we headed back to InSitu Programs (our touring company) to receive a lecture by Ing. Santiago Miño, a civil engineering and professor at Buenos Aires University. The focus of the lecture was on the challenges that Argentina will face with expanding its infrastructure. 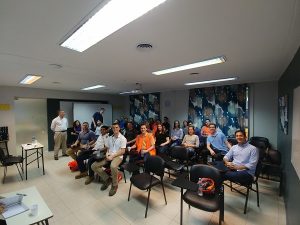 The first problem discussed was Argentina’s centralized system. The country has many resources, but most of the population is centered at Buenos Aires due to easy access of water. This is an obstacle the country will have to overcome to have multiple connected cities. Santiago explained that this style of infrastructure comes from the Mediterranean region and the idea of all paths leading to Rome. The professor concluded this topic by saying in Argentina “all paths lead to Buenos Aires”. 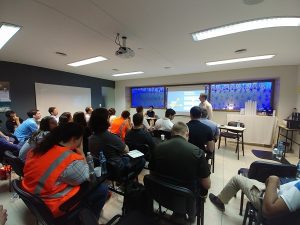