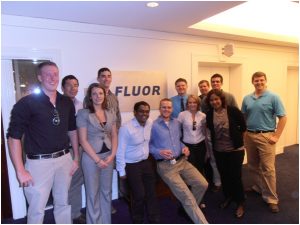 Today was the GLCM’s first day in Brisbane. We met with representatives from Fluor at their downtown office. During our visit, we were given a presentation on the Santos Gladstone LNG project by Joseph Wells (Senior Construction Manager), Joseph Harris (Director of Construction Support), and Ralph Gunness (Field Environment&Sustainability Manager). We also had the opportunity to discuss the challenges of building this mega sized project.

The Santos GLNG project is one of the largest engineering and construction projects in Australia and is the first project in the world to implement technologies to process coal seam gas (CSG) into liquefied natural gas (LNG). A few of the major facilities of this project include 297 CSG wells, 683 km of gas and water pipelines, 35 km of gas transmission pipelines, 185 km of roads, 397 km of overhead power and fiber optic cables, 38 km of underground fiber optic cables, and two permanent 80 person camps. 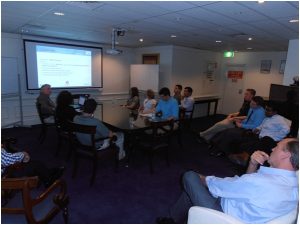 One of the major challenges Fluor must overcome throughout the duration of this project is to protect wildlife and the environment. In fact, the contract for this project requires over 1,100 environmental commitments. Ralph Gunness spoke about the way in which he will guide Fluor to meet these objectives. For example, a significant portion of this project is being constructed in the wilderness of Australia, which is filled with a wide range of animals, many of which are protected by Australian law. In order to ensure that no protected animals are killed during the construction of this project, Fluor has hired a team of expert animal control specialists to safely remove and relocate these animals, some of which are extremely dangerous, from the jobsite during construction operations.

Another challenge that Fluor faces on this project is to mitigate the spread of several types of invasive weeds, especially the Parthenium weed. The Parthenium weed is particularly devastating to the farming industry and is considered to be one of the worst weeds in Australia. In addition, this weed can cause severe allergic reactions, such as a severe form of dermatitis. In order to meet this objective, Fluor will wash down material transport vehicles periodically while they are en route to their destination, which will remove weed spores from the vehicles.