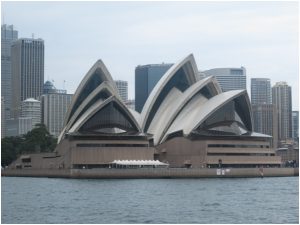 At 10 am in the morning our GLCM group left for a tour of the Sydney Opera House which is situated on the Bennelong Point in Sydney Harbour. We took a walking tour of the Opera House and saw various theatres and concert halls being prepped for shows. At the beginning of the tour we saw a brief video regarding the architect, Utzon who designed the Opera House. For his work on the Opera House, Utzon received the highest honor in architecture the Pritzker Prize in 2003. A Danish architect, Utzon submitted his design as part of a competition held in 1957. Among the designs submitted, Utzon’s design was the most unique because of the design’s resemblance to sea sails as well as unique curves. At the time when Utzon’s design was selected for the Opera House, no one was quiet sure about how the building would be exactly built but they decided to take the risk and hence selected Utzon’s design for construction. 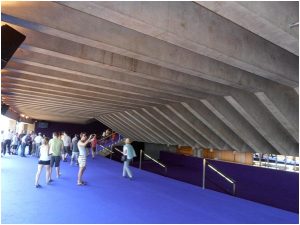 Currently the Opera House consumes energy equivalent to the energy used by 23000 homes. The recognition value of the Opera House is 4 billion and annually they sell over 1.5 billion tickets. 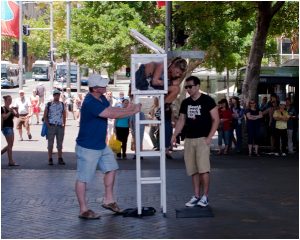 During our time in Sydney we saw a variety of street shows. On our way to the Sky Walk, we were flabbergasted to see a female contortionist attempting to fit herself inside a 14 by 14 inch box. It was interesting to see how commonplace street shows are in Sydney.

In the afternoon we went to the Sydney Tower Eye to experience the “Skywalk”. As one of Sydney’s tallest free-standing structure, the Sky Tower is the second tallest observation tower in the Southern Hemisphere. While we were waiting for the “Skywalk”, we went shopping in the Centerpoint, a shopping centre on the first three floors of the building. 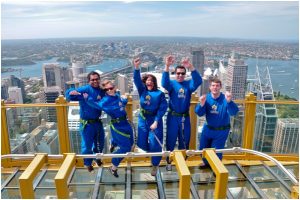 Once we were in the observation deck of the tower, we had a bird’s eye view of the entire city. The “Skywalk” is an area on the top of the tower with glass floors. In order to visit it we had to change into a special attire, wear safety glasses and have safety gear with us. Once we our out on the glass floors, our tour guide shared with us the history of Sydney as well as pointed out to us the major parts of the city. The Sydney Tower had been designed for wind deflections for up to 1 meter and had only experienced this magnitude of deflection during major earthquakes in the past.

A Night on the Town

While part of the group went to the Skywalk Tour after the Opera House Tour, the rest of the group went to climb the Sydney Harbor Bridge. The “Bridge Climb” tour consisted of a roughly 3 hour trip along the top arc of one of the most iconic structures of not only Sydney, but all of Australia. 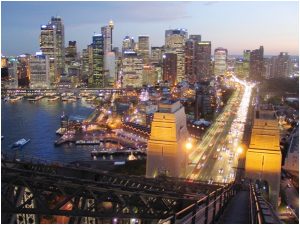 Our group climbed along the top arc of the massive structure learning the history of the bridge, the harbor, the Opera House, and even Sydney itself. While being very educational, it also provided great opportunities for spectacular pictures from hundreds of feet above the water below. 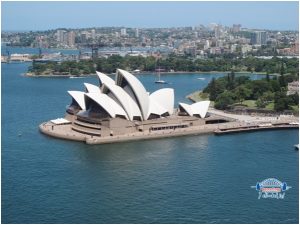 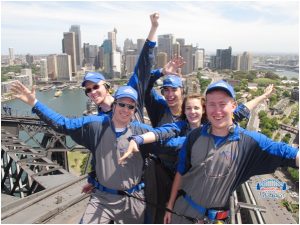 After all of our tours and dinner, the Global Leaders chose to immerse themselves in the culture of Sydney. We were lucky enough to find that the beginning day of “Sydney Festival” was being hosted in the park only minutes away from our hotel. This multi-day event started off with the transformation of the usually peaceful Hyde Park into a massive music venue with live DJs and a variety of popular music. 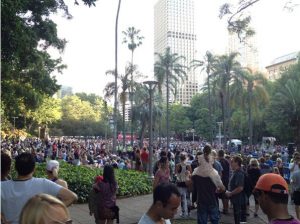 Besides for music, there were amazing light displays, interesting décor, a dance party that followed at a nearby venue and local vendors selling their goods to the public. Thousands of people turned out for this amazing event that spanned well into the night. 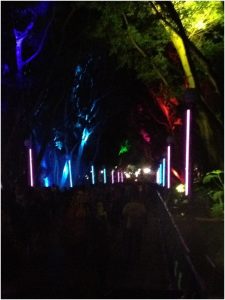 We then finished our last full night in Sydney by attending a performance at the Sydney Opera House. It was a great way to experience the true cultural and artistic atmosphere of Sydney and was amazing to actually attend a performance in such an iconic landmark. 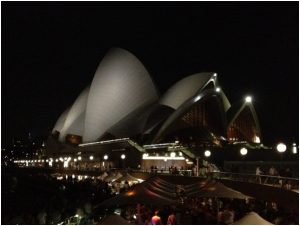